The amount of fines for traffic violations have been raised in a bid to enforce adherence to traffic rules in Chennai. 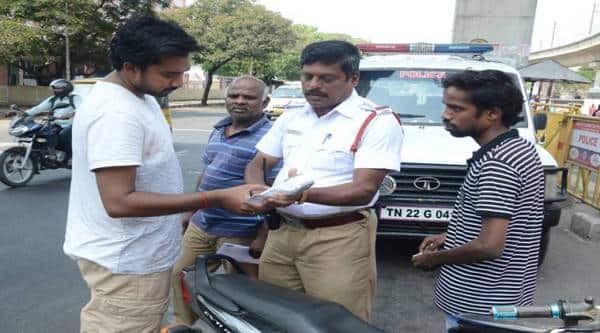 According to the police, most accidents in the city are caused due to non-adherence of traffic rules.

The Greater Chennai Traffic Police (GCTP) has released a fresh list of fines for traffic violations in Chennai under the Motor Vehicle Amendment Bill, which was passed by the Rajya Sabha this year.

In a press release given by the department, officials said that there was a huge rise in the loss of human lives in the city due to the rising number of road accidents. Most of the road accidents in Chennai, according to the GCTP, were caused by motorists who violated traffic rules by helmet-less riding, over speeding, drunken driving and not wearing a seat belt while driving. READ | Chennai traffic police: No helmet? Pay Rs 1,000 fine

“Since the penalty amount is low, the fines are not making a big impact among motorists. To enforce rules among vehicle users and prevent road accidents and loss of life, the Motor Vehicle Act Amendment Bill was passed in 2019 by the Centre,” the GCTP said.

Here is the complete list of fines as per the revised Act:

Under Section 177A, violation of rules and road regulations will attract a fine of Rs. 500. The old penalty was Rs. 100.

Under Section 179, disobeying the orders of the traffic police will attract a fine of Rs. 2000, the old penalty being Rs. 500.

Under Section 180, motorists using vehicles without a valid Registration Certificate (RC book) will have to pay Rs. 5000 as opposed to the old fine of Rs. 1000.

Under Section 182, driving vehicles after cancellation of Drivers License (DL) will attract a fine of Rs. 10,000 as opposed to the old fine of Rs. 500.

Under Section 182B, oversized vehicles (vehicles that are not as per specified dimensions) will be fined at Rs. 5000.

Under Section 193, violation of license conditions will attract a fine between Rs. 25,000 and Rs. 1 lakh.

Under Section 194A, overloading of passengers will be fined at Rs. 1000 per extra passenger.

Under Section 194C, riding a two wheeler with more than two passengers (overloading) will be fined for Rs. 2000, along with suspension of license for 3 months. The old penalty was Rs. 100.

Under Section 194D, helmetless riding will attract a fine of Rs. 1000, along with 3-month suspension of license. The old penalty was Rs. 100.

Under Section 194E, blocking passage of emergency vehicles (fire engine, ambulance) will be fined at Rs. 10,000.

Under Section 199, violations by juveniles will result in the juvenile being tried under the Juvenile Justice (JJ) Act. Meanwhile, the parent or guardian of the juvenile will be fined with Rs. 25,000 and a 3-year imprisonment, while the registration of the vehicle will be cancelled.

Under Section 210B, offences by authorities enforcing the traffic rules will attract a fine amounting to twice the amount under the particular section.

The GCTP has announced that the revised fines will be implemented across Chennai soon and have asked motorists to adhere to traffic rules in the city.