Needhi Rajan said they were given instructions on when to eat and sleep. Their building was guarded by security personnel with arms, he said. 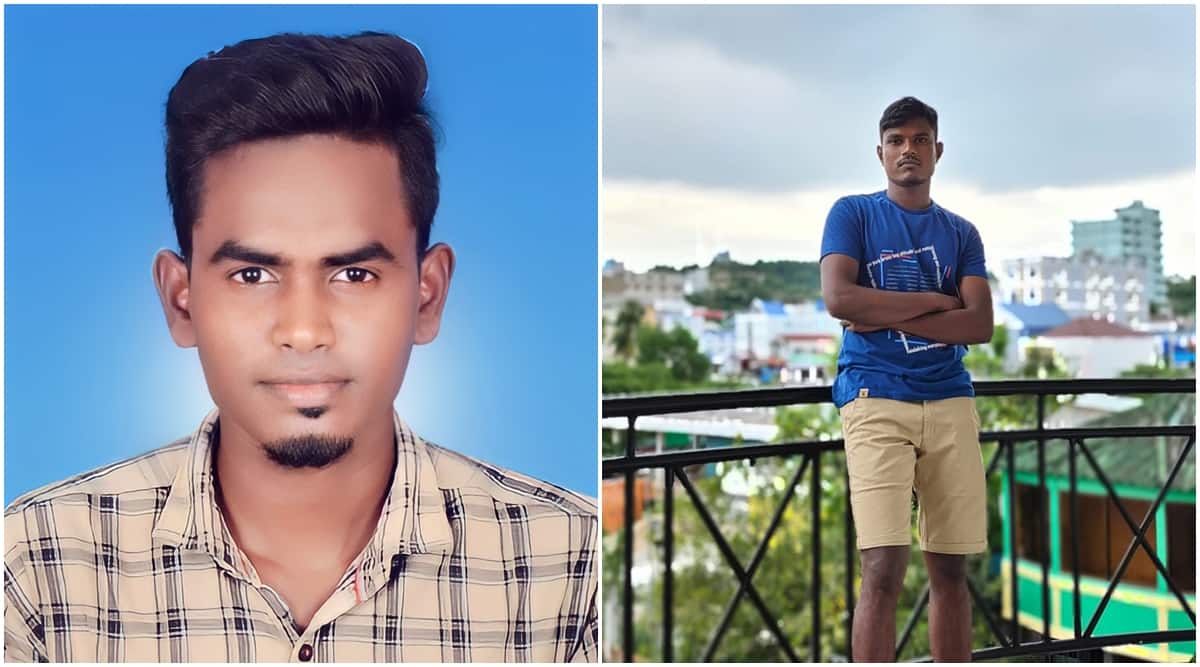 Rajan, a diploma graduate, and M Ashok Manikumar (right), an engineering graduate, were among the Indians who returned from Cambodia recently after falling for a job scam.

Needhi Rajan N still trembles as he recalls the torture he had to undergo in Cambodia. Working for 16 hours daily, eating only boiled rice and getting shock treatment; the 25-year-old from Pirabugaloor in Tamil Nadu’s Ramanathapuram district endured it all.

Rajan, a diploma graduate, and M Ashok Manikumar, 25, an engineering graduate from Uraiyur, were among the Indians who returned from Cambodia recently after falling for a job scam.

Rajan told indianexpress.com that during the Covid-19 pandemic, he was left with no work and in May this year, he came in contact with N Mahadeer Mohammed of Kolundurai, a school junior, who informed him that he works as an agent in Cambodia and there was a vacancy for data entry role.

Rajan and Manikumar were informed that they can receive up to $1,000 per month in Cambodia. But they were asked to pay Rs 2.5 lakh upfront for ticket and visa expenses.

Mahadeer later contacted Rajan from Cambodia and asked him whether they had readied the amount needed to be paid for the visa expenses. The duo then provided half of the amount to Mahadeer’s mother N Sayed Ruhani and the rest through GooglePay to Mahadeer in June. Within a few days, Mahadeer sent them tickets to Cambodia.

“On our arrival in Cambodia in June this year, Mahadeer visited us and took our passport and said it was needed for the business visa process. We were told that in Cambodia, there was an option to convert a tourist visa to a business visa on arrival. We were then taken to a guest house. Mahadeer informed us that the guest house belonged to the Chinese company we were going to work for,” said Rajan.

Within two days, they got a call for an interview and were selected for the job. However, when they entered the company, it looked like a typical jail cell, said Rajan.

“We were given instructions on when to eat and sleep. We were not allowed to go out either… We had to be in our room or office. The entire area was guarded by security personnel with arms. If we needed anything we could go to the second floor and buy some local food,” he said.

Rajan noted that there were around eight companies in their building and close to 3,000 people from different nations like India, Pakistan, Bangladesh, Vietnam, Malaysia were working there. He said when they started working, they came to know that they were brought there to do scam work and not data entry.

“We were told to do night shifts. We would start working at 10 pm and it went for 15-16 hours. We called Mahadeer and told him that everything was illegal there and that we did not want to be a part of it. He asked us to stay calm for a few days and said he would provide us with an alternative job and look for a few others to replace us there. The food was very bad. There was nothing except boiled rice to eat. Our health was affected badly,” he said.

Explaining the modus operandi of the scam work, Rajan said the company would create fake profiles for their employees on all social media platforms and force them to interact with wealthy customers in the USA posing as women. They were to persuade these customers to invest in share markets and other business deals run by their company. He said they would use the services of local models and make them speak to the customers on video calls. They would make the customers believe that the person with whom they are interacting on social media was real.

“We were promised $1,000 per month but were provided $800 only. When we checked with Mahadeer, he again said he would do something. We were tortured if we failed to achieve our target of two new customers per day. We were scolded, made to kneel, beaten and provided shock treatment. We were mentally depressed. Fortunately, the Cambodian government took some action and raided all these companies doing scam work. Our company was shut and the employees were taken to a detention centre. From there, we wrote to The Indian embassy,” he added.

Rajan claimed that the officials told them that if their embassy was willing to take measures to take them back, they could go home. After multiple attempts, he said, they managed to get their passports from their agent. Since they were brought on a tourist visa and had stayed in Cambodia for more than 15 days, they were told to pay a fine amount for their extended stay. He added that the Indian embassy informed them that they cannot interfere in the matter and they had to pay the fine amount.

“We checked with our agent and told him to send the amount as he was the one who brought us here on a tourist visa. He kept delaying and later we learned that he had sold us to the Chinese company for $3,000. We somehow managed to get the passport from him and through our families and friends, settled the fine amount of Rs 1.5 lakh and with the help of the Tamil Nadu government, we returned home last month. Around 11 others from different parts of the country also managed to reach their hometowns. We then approached Mahadeer’s mother and told her to return our money but in a very arrogant manner, she said her son gave us the job. We earned from it and she could do nothing, she said,” Rajan added.

The youths then lodged a complaint with the superintendent of police in Ramanathapuram against Mahadeer and his mother. The police registered a First Information Report (FIR) and booked them under Indian Penal Code (IPC) sections 406 (breach of trust) and 420 (cheating).

Watch | After Delhi last year, another Air India plane gets stuck under bridge in Andhra Pradesh