The Tourism Department will soon be starting soft skills training programmes for all the autorickshaw drivers. 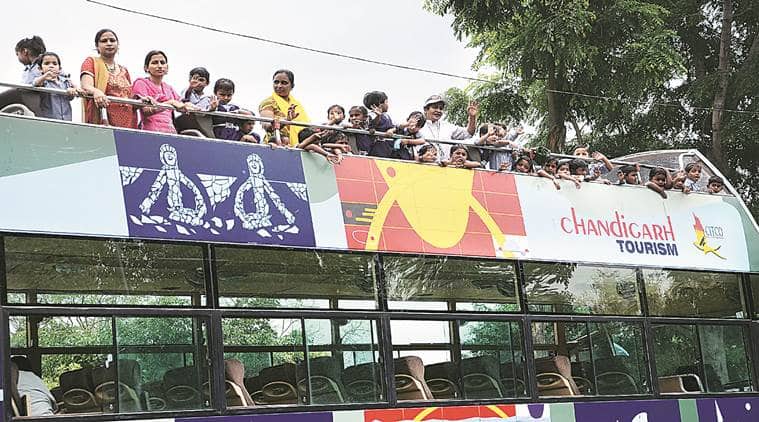 The double-decker hop-on-hop-off was started in 2001 by the tourism wing of the CITCO. (Source: Express Archives)

An additional hop-on-hop-off bus, new 10-seater battery-operated e-rickshaws connecting the tourist places, audio devices for guided tours and tourist buses, and a web portal dedicated to tourism are some of the proposals on the anvil to attract tourists to Chandigarh.

Adding to an already existing double-decker deluxe coach, which was started in 2001 by the tourism wing of the Chandigarh Industrial and Tourism Development Corporation (CITCO), a new hop-on-hop-off bus will be seen plying on roads by the end of this month. Officials say that from then on, the double-decker bus will be available to the tourists after every half an hour.

Sharing new proposals to promote tourism in and around the city, Director (Tourism) Kavita Singh says that although Chandigarh is not about forts and palaces but the city is well-known for its greenery, Sukhna Lake, Sector 17 Plaza and Rock Garden. That is why the department has plans to initiate promotional activities at all of these places and connect them through e-rickshaws.

“On the occasion of World Tourism Day on September 27, we are starting with a bicycle tour across the city; it has been initiated as a pilot project in order to institutionalise it later. It will promote cycling in the city. We plan to have proper stands from where anyone can take the bicycle on rent.”

Singh says that the UT Tourism Department plans to bring out a booklet on city beautiful. “There will be a pamphlet or a small booklet which will contain complete updated information about the tourist places, hotels, food, suggested areas to visit and the availability of public transport. For example, if somebody is in Delhi and plans to visit Chandigarh, he/she should know how to spend two days in the city.”

In addition to this, the Tourism Department will soon be starting soft skills training programmes for all the autorickshaw drivers. “We may include cab drivers as well. Our plan is not confined to the skills training programme alone; we intend to give these drivers individual badges with ‘tourism-friendly’ written on them. It will give an identity to all these drivers besides promoting our tourism,” Singh adds.

In order to make Sector 17 a social and cultural hangout once again, the Tourism Department will be starting with weekend evening shows, including cultural programmes, street plays and musical performances, at the Sector 17 Plaza. Singh says that the department in collaboration with CITCO has already chalked out a plan for 52 weekends.

Although the UT Tourism Department has an official website which has all the information about CITCO hotels, Bollywood facilitation cell, gardens, war memorial, and places to see, the department in association with a private firm has decided to launch a dedicated web portal which will have latest updates from the city not only about hotels, tourist places or gardens but also about carnivals, festival-related activities and all other events which take place at Tagore Theatre, city parks, Kalagram, Kala Bhawan, government museum and art gallery, colleges and Panjab University.

However, the Tourism Department has mooted several proposals over the years that have failed to take off. The proposal to encourage night tourism in the city is one such plan. It was proposed that several places in the city including the Capitol Complex and Rock Garden will be illuminated. A guided tour of these places would have been provided at night. The bread and breakfast scheme of the department too has failed.