New lights will reduce electricity bills by 70 per cent. 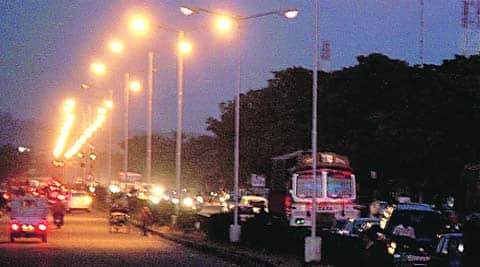 The streetlights in the city are likely to be replaced by light emitting diodes (LEDs) soon. The project would be implemented in phases, gradually covering the whole city. Provisions for the same were made in the budget 2014-15, of the municipal corporation, that was approved today.

It has been proposed that the sectors adjoining Jan Marg and Dakshin Marg would be covered in the first phase and eventually it would be extended to other sectors. Under this project, a company would be hired by the civic body, which would install the streetlights and also look after the maintenance. Once the company recovers its cost, the lights would be handed over to the civic body.

The V-4, V-5 and V-6 roads would be targeted first. Currently, several streetlights do not have electricity meters installed. The MC is paying the Administration a lump sum bill to the tune of Rs 3 crore every month even when the streetlights are not working, which is the case in many parts of the city. As per the conditions, the LEDs have a five-year warranty.

Councillor Saurabh Joshi said the LEDs would reduce the electricity bills by 70 per cent as these are energy efficient. With the reduction in the bills, the cost of installing the streetlights would be recovered by the company.

Last year, the municipal corporation had handed over the work for installing LED streetlights in Sectors 20, 30 and 32 to the UT Electricity department. A tender for the same had been floated. However, certain objections were raised during the pre-bid meeting. Thereafter, new tenders were floated, which are going to be opened on February 5.

Superintending Engineer (Electricity) M P Singh said that since its a new project, only a few sectors have been chosen. “We will analise the performance of the new lights, and also compare them to the existing ones. In case the results are favourable, the project would be extended to the other sectors as well,” he said.