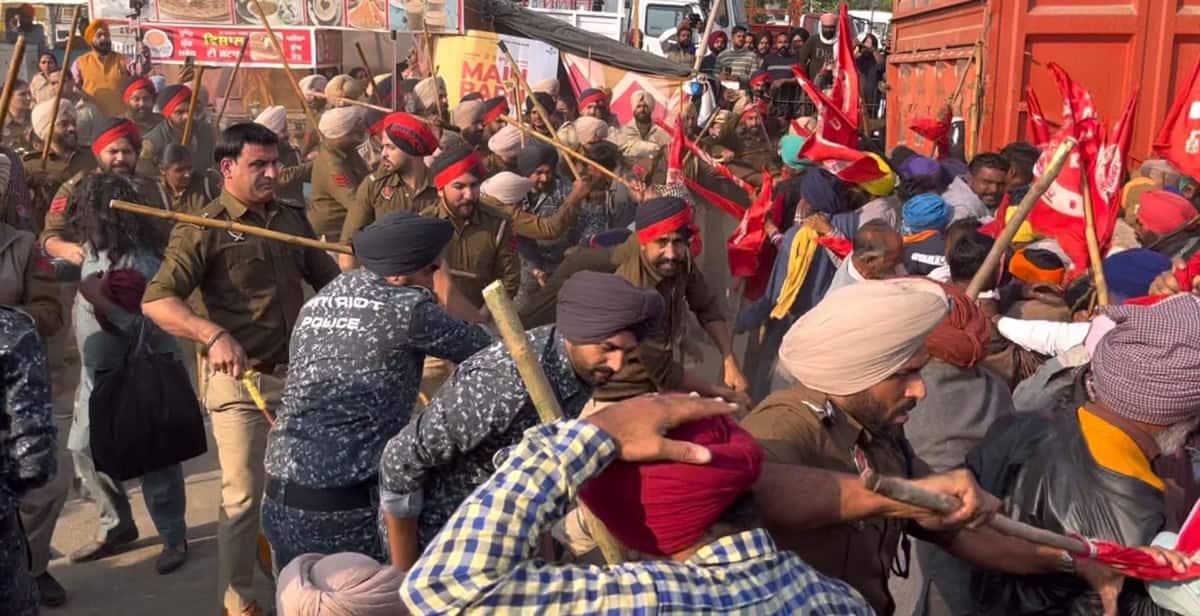 Policemen disburse the protesting members of the "Sanjha Majdoor Morcha" who were marching towards CM Bhagwant Mann's residence in Sangrur on 30/11/22, Wednesday. (Express photo by Gurmeet Singh)

The protesters sat on a dharna on the main road opposite the Dreamland Colony demanding an audience with Mann till, late in the evening, the AAP leader agreed to meet Morcha leaders on December 21 at Chandigarh. Police blocked the Sangrur-Patiala road.

Kashmir Ghugsher, from the Pendu Khet Mazdoor Union, appeared to draw parallels with the farmer agitation in 2020-2021. “Many union members got hit by the lathis of the Punjab police… Outside the colony’s gate, there is a huge parking space, but we were not allowed to protest there as barricading with barbed wires had been done to stop protesters from gathering. I recall Bhagwant Mann’s concern when the BJP-led Haryana government had done such barricading during the farmer agitation in 2020-2021. Now the same has been done by his government outside a colony where he has a rented house and he hardly visits that place.”

When contacted, SSP Surendra Lamba said that a group of protesters had initially tried to create pressure on police but were controlled in a peaceful manner. “So we did not lathi-charge anyone. A few aggressive people were handled within no time and later they continued with dharna on the main road,” he said.

He said the protest was organised by the unions outside the colony and the police coordinated with the Chief Minister’s Office (CMO) for arranging a meeting between the two parties.

The SSP further said the meeting with the chief minister has been fixed for December 21 and letter was handed to unions regarding this.

Tarsem Peter, president of the Pendu Khet Mazdoor Union, said a meeting with Mann had been scheduled for October 3 but it was postponed. And Mukesh Malaud, president of the Zamin Prapti Sangharsh Committee demanded daily minimum wages be kept at Rs 700. “Daily-wage employment should be made available on all days instead of only 100 days as under the MGNREGS. One third of panchayati land meant for agriculture should be given at nominal rates to Dalit families for farming,” he said. “The base price is very high. Moreover, ‘dummy Dalit candidates’ are fielded by landlords at many places. This anomaly needs to be fixed.”

Among the Morcha’s demands are membership in cooperative societies for farm labourers and agricultural as well as non-agricultural loans for them.

The mazdoor wing of the Kisan Mazdoor Sangharsh Committee has been protesting outside the deputy commissioner offices in Fazilka, Moga, Ferozepur, Kapurthala, Hoshiarpur, Jalandhar, Amritsar, Gurdaspur and Taran Taran for the past five days. They oppose the reduction of the central government’s ration quota and demand a hike in wages, according to Baljinder Singh Talwandi, press secretary of the committee.