On Sunday, for the second day running, the chakka jam continued from noon till 2pm in various Punjab villages, during which farmers burnt effigies of the Haryana government. 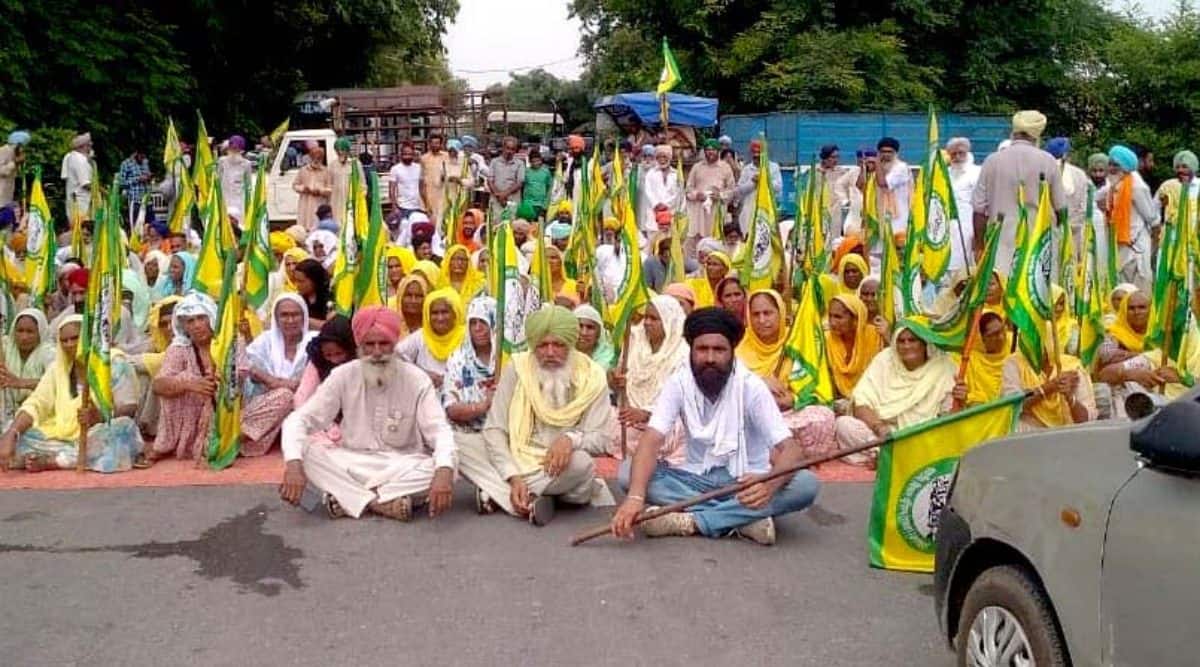 Farmers from various Unions protesting against Haryana Police over the Karnal lathicharge in Patiala on Sunday. (Express Photo by Harmeet Sodhi)

Thousands of farmers again poured onto the streets of Punjab on Sunday, blocking traffic on all the important states and national highways for two hours, in what they termed was a protest against the brutal lathicharge on fellow agitators in Karnal a day earlier.

Haryana police on Saturday had allegedly carried out a lathicharge on protesting farmers in Karnal where they had blocked multiple roads and highways. The farmers were protesting against a meeting of the BJP over the upcoming municipal polls chaired by Chief Minister, Manohar Lal Khattar. Several farmers sustained injuries as the police resorted to force to disperse them and cleared the national highway in Karnal.

On Sunday, for the second day running, the chakka jam continued from noon till 2pm in various Punjab villages, during which farmers burnt effigies of the Haryana government.

In Ludhiana, the protest was organised near MBD mall, Jalandhar bypass, Jagraon, and a few other places, during which the highway was blocked for 2 hours on a Sunday.

Manjeet Singh Dhaner. a senior vice president of BKU-Dakaunda, said, “The Haryana government ordered action against us which led to several farmers sustaining injuries during a lahicharge. The orders of the SDM Karnal has been backed by the politicians.

Hence, we need to stay united in our fight for our farmer brothers. This is the reason that we called for a chakka jam strike across the state on Sunday. We need to get ourselves heard and also want to give a loud and clear message to the administration that we farmers are united.”

In a now-viral video on social media, Karnal Sub-Divisional Magistrate (SDM) Ayush Sinha was on Saturday seen asking policemen to ‘break the head’ of protesters who had gathered to protest against the Haryana CM and state BJP leaders, leading to a major uproar.

In Ferozepur, farmers staged dharnas in blocks — Zina, Ghal Khurad, Ferozepur rural and city, Guru-Har-Sahai, and Mamdot — on Sunday to protest against the police action.

In Abohar, farmers, under the banner of BKU-Rajewal, blocked the Rajasthan border for two hours.

Sukhdev Singh, a farmer from Kokri Kalan, said, “Effigies were burnt in 705 villages of Punjab and at 39 pakka dharna sites. Even on Saturday, villagers had burnt effigies in hundreds of villages. Farmers, labourers, women, youngsters, everyone have been participating in our protests in large numbers. The farmers were protesting in a peaceful manner [in Karnal on Saturday] and hence this inhumane action against them was absolutely uncalled for.”

He added,” The SDM of Karnal and all the police officers involved should be immediately booked in the case. Even the Haryana CM needs to face action as one of the protesting farmers died.”

Jhanda Singh Jethuke, another protester, said, “We will intensify our struggle in the coming days. On September 7, we will support a dharna that will be staged by government employees for various demands. On September 13, we will gherao Moti Mahal, the personal residence of Punjab Chief Minister Capt Amarinder Singh in Patiala.”