Punjab: Defiant farmers say have no choice but to burn stubble

Most farmer outfits have announced that crop residue would be set on fire to clear the fields. Experts said the problem would be compounded as the harvesting would be delayed, adding that advent of cold weather by then would make the situation worse. 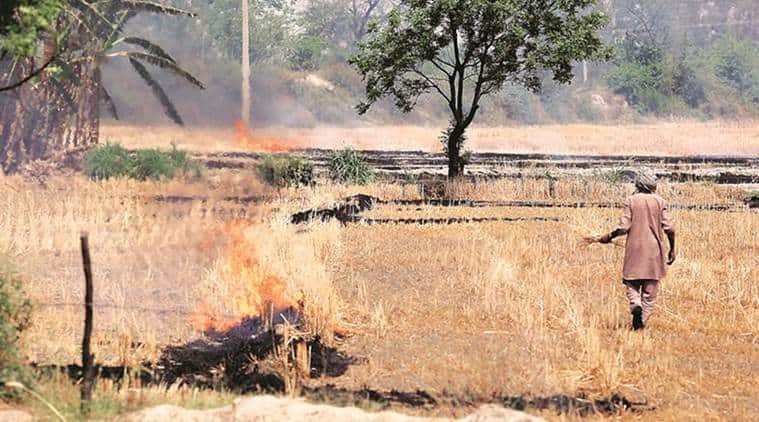 Most farmer outfits have announced that crop residue would be set on fire to clear the fields. (Representative image)

Manjit Singh, a 50-year-old farmer of Reona Neewan village in Fatehgarh Sahib, is eagerly waiting for his paddy crop to mature so that he is able to harvest it fast and prepare his fields for the next wheat crop.

He owns a combine harvester, but rues that the recent untimely spell of rain has delayed harvesting operations by at least 15 days, with the government adding to the farmers’ troubles with its directive of not burning stubble to clear the fields.

“Rabb vi vairi ho gya te sarkar vi (God and the government both have turned against us),” he says, adding that he plans to defy government orders. He says that he is aware that with rains increasing moisture content in the roots of the paddy plants, the somke produced after stubble burning would be thicker than usual.

About installing Straw Management System (SMS) on his harvester, he said: “I will not spend Rs 1 lakh on it. But I will spend Rs 2 lakh in courts if they register a case against me.”

“Jehda vi ayega chhaped kha ke jayega (I will slap whoever comes to challan me),” he adds.

Manjit Singh is not the only one, most farmer outfits have announced that crop residue would be set on fire to clear the fields. Experts said the problem would be compounded as the harvesting would be delayed, adding that advent of cold weather by then would make the situation worse as smoke tends to get trapped during colder days.

“Jan ta vatavaran bacha lo jan kisan nu (Either save the environment or save the farmers,” says Tarsem Singh of Alampur village in Patiala.

He adds: “I am anxious that there may not be another spell of rain in the coming days. My livelihood depends on this harvest for at least next six months. Then I have to prepare my fields for the wheat crop. And then they are saying we should not burn stubble.” Baldev Singh, a farmer of Daun Kalan village in Patiala, said: “Are we the only ones who pollute? Look at the pollution in Mandi Gobindgarh, the steel city of Punjab. It is always covered by a blanket of smoke. The government does not ask them to mend their ways.”

The state government, meanwhile, has made an appeal to the farmers with Chief Minister Amarinder Singh asking farmers to desist from burning crop residue. “We have seen government’s appeals on TV. We have seen banners on the buses listing dangers of stubble burning. But what should we do?” asked Sukhwinder Singh, another farmer of Alampur village adding nobody had come personally to educate them yet. “Where is the solution? We will be forced to do it even if they put us behind bars or beat us up. We have asked them either for an economically- viable solution or a compensation. They have none,” said Sukhdev Singh Kokri, a farmer leader of Bharti Kisan Union (Ugrahan).

View from the Right: Rahul and Rafale