"This is my Punjab. I have done the best possible for the people of my state. I have been in politics for 52 years and I will be in politics. I have resigned today but in politics, options are never closed," Amarinder said. ﻿Captain Amarinder Singh resigned as Punjab chief minister on Saturday. After submitting his resignation to Governor Banwarilal Purohit, minutes before the members of the Congress Legislative Party were to meet at the PPCC headquarters in Chandigarh, he told the media, “I have resigned. I spoke to the Congress president in the morning. I told her I am resigning.”

“I feel humiliated. This has happened for the third time. They called MLAs twice in Delhi. And now this third meeting. I feel they have no confidence in my work,” Amarinder added.

Making it clear that he would explore options, Amarinder said: “There is always an option, and I will use that option when the time comes… at the moment I am still in the Congress.”

“Apparently they (Congress high command) do not have confidence in me and did not think that I could handle my job. I felt humiliated at the manner in which they handled the whole affair,” he told media persons at the Raj Bhavan. “Let them appoint who they trust,” he remarked, taking an apparent dig at the party leadership.

Amarinder tendered his resignation to the governor at the Punjab Raj Bhavan shortly after 4.30 pm, pre-empting what was widely being seen as a move to remove him from chief ministership through an emergency Congress Legislative Party (CLP) meeting convened by the All India Congress Committee (AICC) at 5 pm.

“I hereby tender my resignation as Chief Minister, and that of my Council of Ministers,” the one-line resignation letter said. Amarinder Singh outside Punjab Raj Bhavan after resigning as the CM on Saturday.
Explained |Explained: Five reasons why Captain Amarinder Singh had to step down as Punjab CM

His wife and MP Preneet Kaur accompanied him to the Governor House. Amarinder’s son, Raninder Singh, was also present on the occasion along with MPs Gurjeet Singh Aujla and Ravneet Singh Bittu, AG Atul Nanda and chief principal secretary to CM Suresh Kumar.

Amarinder skipped the CLP meeting. Talking to a TV channel later, he said, “I do not know who said what about me. I have not been going to Delhi much. But some people have been going there. I did my duty. I have been a CM for nine and a half years. This is my Punjab. I have done the best possible for the people of my state. I have been in politics for 52 years and I will be in politics. I have resigned today but in politics, options are never closed.”

Asked if the party were to appoint Navjot Singh Sidhu or Sunil Jakhar as chief minister, he said: “I will never accept Navjot Sidhu as CM. He is a total disaster. He could not run a single ministry. How will he run the whole state? I know his capability.” The former Punjab chief minister, however, did not comment on Jakhar.

On the question of joining the BJP, he said: “Do not ask me these questions. I am going to be 80 years old. I am fitter. I am a Fauji. I have completed my task. If one task is over, I can take the other task.” 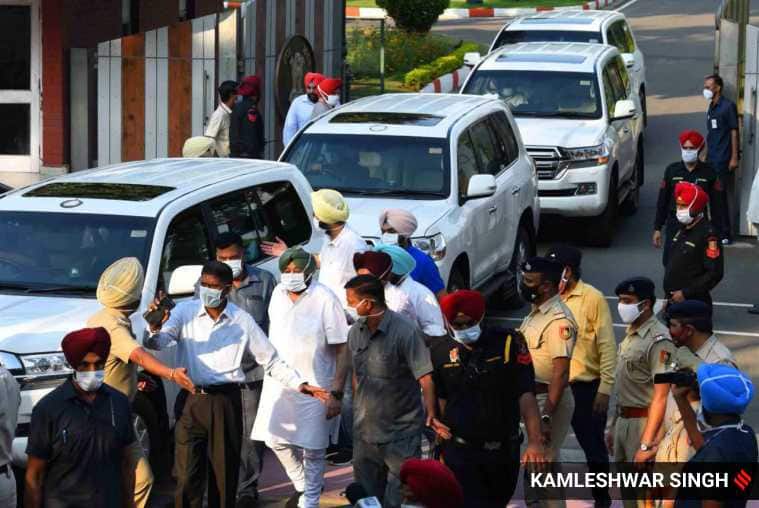 Amarinder Singh outside Punjab Raj Bhavan after resigning as the CM on Saturday.

He said he would take time to decide his future political course. “Nothing will happen in a day or two. I have many friends. You make many friends in 52 years. I will talk to them. I have done so much for the farmers. I have supported them in their cause. We will see what the options are. I told the Congress president last time to relieve me from the CM’s post. She told me she wanted me to carry on. But I do not know why they have made this decision now,” Amarinder said.

Asked about the allegation made by his detractors within the party that he has a quid pro quo with the Akalis, he said, “For 13 years, the Akalis have booked me in various cases. I was sacked from the Assembly. I went to the court. Tript Bajwa either does not know politics or he is lying.”

The Captain questioned why the CLP meet was held even after he had tendered his resignation.

Asked if he would speak to the high command, he said: “I have known Sonia-ji for 50 years. Rahul and Priyanka are like my own children. I have known them from the time they were very small.”