The protesters urged the university authorities to withdraw the examination fee hike. 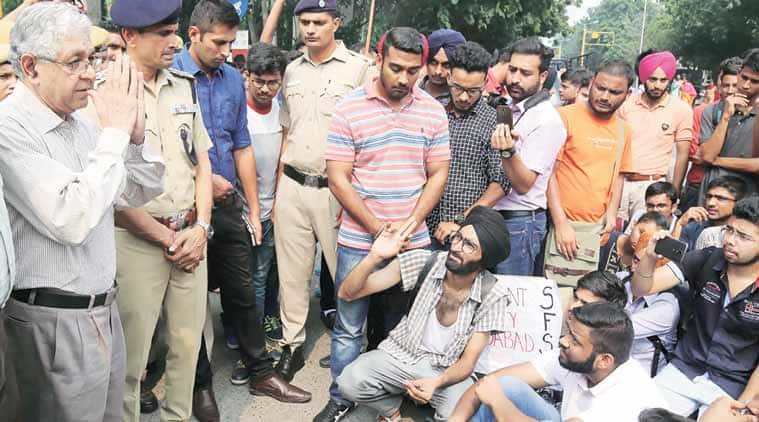 Commuters faced inconvenience owing to long traffic snarls. Following the protest, the university authorities shut Gate No. 2, causing further inconvenience to the commuters. The students started their protest from the vice-chancellor’s office and then marched towards Gate No. 2. Police booked 17 students by name and 125 others under Sections 147, 149, 341 and 188.

PU vice-chancellor Arun Kumar Grover addressed the protesting students and said he had been trying his best to arrange funds from the central government for the university and had sought Rs 277 crore from the Centre. He informed the students that he was preparing a history fact sheet of finances the university got in the past.

Damanpreet said: “The fee hike is affecting the students of all colleges in Chandigarh and Punjab. We will take the movement to the next level. We will try to coordinate with the organisations, students and other sections of the university – teachers or non-teaching employees.”

He added: “The Centre and the state governments are running away from their responsibility by slashing the funds from education. We will continuously fight against the growing privatisation and commercialisation of education. We appeal to unite and fight for the common cause of university and education.” The students clashed with the police, when the latter tried to pacify the protesters.