Panchkula: Not a smooth ride for commuters

According to the residents, the dilapidated condition of the roads also causes frequent traffic jams. 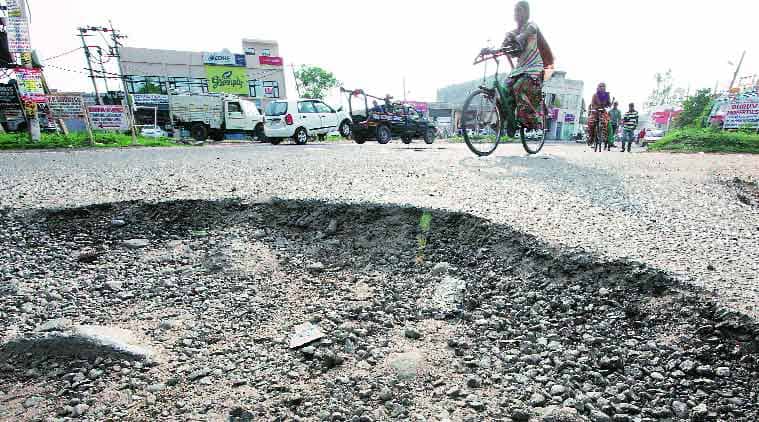 The condition of a road in Panchkula Industrial Area on Friday. (Source: Express Photo by Jaipal Singh)

Inordinate delay by the authorities to undertake repair of dilapidated roads in Panchkula is causing immense inconvenience to commuters.

Due to incessant rains this year, roads leading to sectors 15 and 16, Buddanpura, New Labour Chowk, Rajiv Colony and Indira Colony in Panchkula from the Zirakpur highway have developed potholes.

“Almost all roads in Panchkula are in shambles, and the presence of potholes has made driving nearly impossible,” said Rajit, a commuter.

According to the residents, the dilapidated condition of the roads also causes frequent traffic jams.

Locals allege that the road near New Labour Chowk has not been macadamised for over two years.

“Potholes on this road pose a threat. Even pedestrians face a tough time walking here,” said a group of commuters.

Further, due to inadequate number of streetlights, the commuters find it difficult to see the potholes at night.

However, Panchkula Mayor Upinder Kaur said these all roads will be re-carpeted soon. “Work is going on in some areas,” she said.

A group of Sector 28 residents of have also submitted a complaint at the CM’s Window demanding repair of roads in the sector. They allege that while the Haryana Urban Development Authority (HUDA) has recovered development and maintenance charges from the allottees for civic amenities, the roads are not being repaired. In their reply, HUDA officials have contended that the roads will be carpeted when at least 20 houses are constructed in the area.