Outside Bhagwant Mann’s residence, protests many, demand one: ‘Listen to us, Mr CM’

The protest by the Overaged Berozgar Union at that spot adds to the already long list of people already holding protests at the main gate — nurses seeking jobs, candidates in the waiting list for the jobs of clerks and constables. 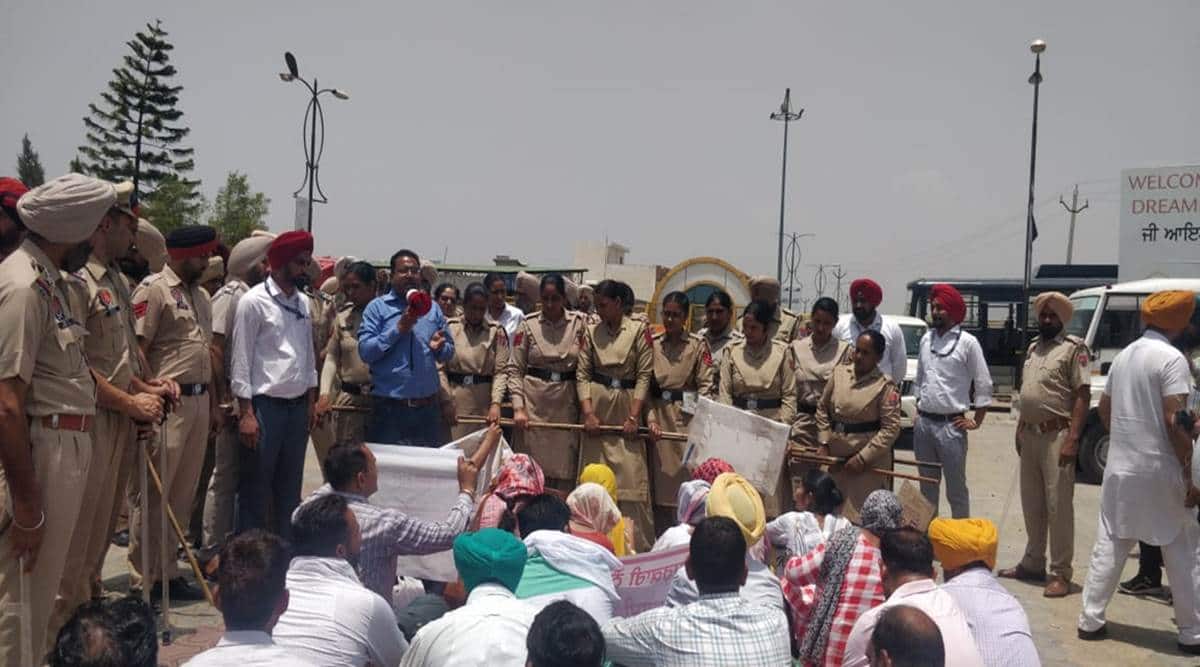 A protest by Overage Berozgar Union outside Dreamland colony in Sangrur on Saturday. (Express photo by Raakhi Jagga)

It is noon and a group of protesters armed with banners — that read they are from the “Overaged Berozgar Union, Punjab” — walk towards the main gate of ‘Dreamland’, a gated private colony located on Patiala road, which has a house owned by the Punjab CM.

The protesters are shouting slogans against Punjab CM Bhagwant Mann, and the AAP government as they slowly make their way towards the gate of Dreamland, where hundreds of police personnel, baton at ready, are standing guard. As soon as the protesting group reaches near the gate, the policemen intervene. There are minor scuffles and the sloganeering picks up decibels. The paltry group, however, is quickly overpowered, following which they decide to squat on the road at the spot in the scorching heat and start making speeches. 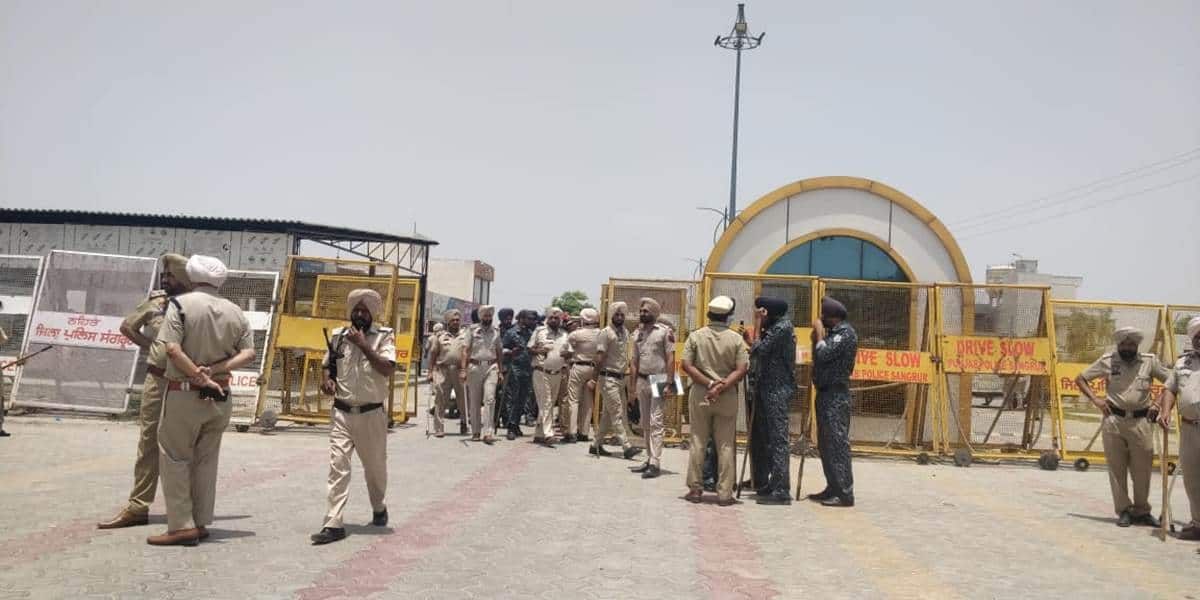 Heavy security deployed outside Dreamland colony ahead of the protests. Punjab CM Bhagwant Mann has a house inside this colony. (Express photo by Raakhi Jagga)

The protest by the Overaged Berozgar Union at that spot adds to the already long list of people already holding protests at the main gate — nurses seeking jobs, candidates in the waiting list for the jobs of clerks and constables.

The scenes of protests outside Dreamland society has become a common sight. Barriers have been placed near the main gate of the colony, with a heavy contingent of policemen always present at the spot as part of Mann’s security. The lane where the CM’s house is located too is teeming with securitymen.

“Bhagwant Mann has his native house in Satoj village of Sunam constituency. He had lived here briefly after he became an MP for his second term. Now a days, he comes here only once in a while. But since one of his residences is located here, we come here to protest,” said Raman Kumar, president of Overaged Berojgar Union.

Daljit Kaur, who is protesting to get her job back in Rajindra Medical College as a nurse, said, “The last time he came here was about a fortnight ago. He did not even stop to listen to us.”

Raman Kumar added that his union had earlier held a similar protest outside the house of Punjab Education Minister, Gurmeet Singh Meet Hayer, in Barnala. On June 4, they decided to make their way to Mann’s Dreamland colony to express their colony.

“There are around 4000 people like us in Punjab. We had cleared the teacher’s eligibility test (TET) during the erstwhile Congress’ regime. However,we were not given any jobs. Bhagwant Mann used to meet us when he was in the Opposition. He himself had stated that when politicians had no age to contest elections, why should people seeking jobs do so. Thirty seven is the age limit for us to apply for jobs. Many of us have been protesting for the past many years.” Pakka dharnas (in tents) going on outside Dreamland colony of Sangrur. (Express photo by Raakhi Jagga)

Though members of the Overaged Berozgar Union decided to clear out of the area after protesting till the evening, a few others have stayed put for days, pitching tents and holding pakka dharnas. WIth the Sangrur Lok Sabha bypolls scheduled to be held later this month, the protests are likely to intensify.

One of the pakka dharnas being held at the site are by nurses who want to be re-employed. Baljit Kaur, one such protesting nurse from Bharoch village of Nabha, while sitting under a tent near the main gate of the colony said, “We were employed at the Rajindra Medical College during Covid’s first wave. After the second wave, around 150 of us were relieved of duty. Since then have clamoring to get our jobs back. But the then Congress government did not listen to us. We then launched a hunger strike in January this year and Bhagwant Mann himself came and told us that if the AAP is voted to power, all of us will be rehired. We have been sitting outside his colony since May 4, and he has not even met us once.”

Kaur said that in order to sustain their pakka dharna, they had divided themselves in batches, with nurses coming on a rotational basis and a few staying overnight daily .

A little distance away from the protest of the nurses is a dharna by a union comprising members who have passed the clerk’s test pass but not been provided jobs by the government.

A protester from the union, Shubam Garg, said, “In 2016, a total of 1883 posts for hiring clerks were advertised. After that a number of them were put on the waiting list. Later during the Congress’ rule, 2100 more posts were advertised. However, the people already on the waiting lists were not considered .. The last recruitment happened in 2018 and after that the government stopped recruiting clerks altogether. Bhagwant Mann, when he was in the Opposition, had told us if the AAP was voted to power, he will look into the issue as unemployment was something his government wanted to deal with on a priority. However, we have been sitting here since April 4 and he has not even stopped once to hear us out.” 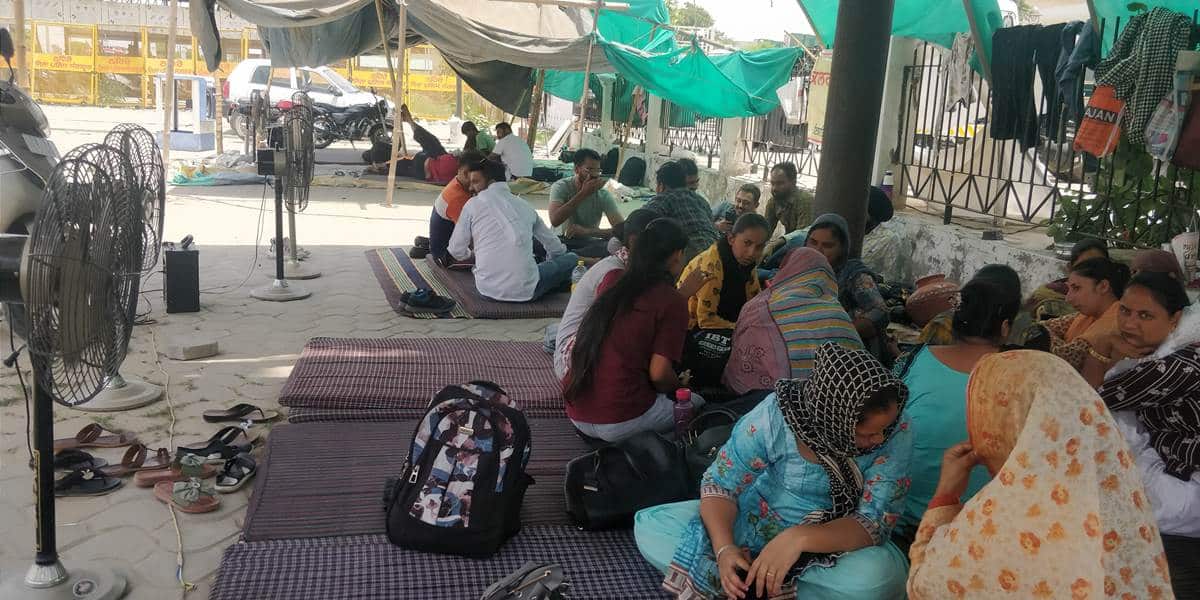 The third pakka dharna in the row is that candidates who want to be hired as constables in Punjab Police. According to one of the protesters, Gursewak Singh of Lalbai village of Gidderbaha, all of the members of the union had passed the physical tests and were put on the waiting list. “We have held a number of meetings with the previous governments and one meeting with Bhagwant Mann himself. He had then assured us that he will look into our demands, but nothing has been done. They can take physical tests again if they want,” he said.

Baljit Ram, 29, a second protester from the same group chimed in that six women from the union had positioned themselves on the Haripura Chowk water tank to press for their demands. “We are here since May 8, but no one has come to meet us yet,” he said.

On a normal day, around 20-30 protesters can be seen perched under each tent, which have mattresses and fans, at all three pakka dharnas sites. In case of rains, two trolleys with waterproof tarpaulin sheets are kept on standby.

“The fans and mattresses were arranged for us by BKU-Ugrahan,” said Bimla, one of the protesting nurses, who points to the farmer union flags fluttering in the area.

She added that the protesters have been permitted to use the bathroom of Dreamland Colony that is located near the main gate for taking a shower etc till 7am every day.