Railway Police IG says that ‘if required, measures will be taken to improve the situation’. 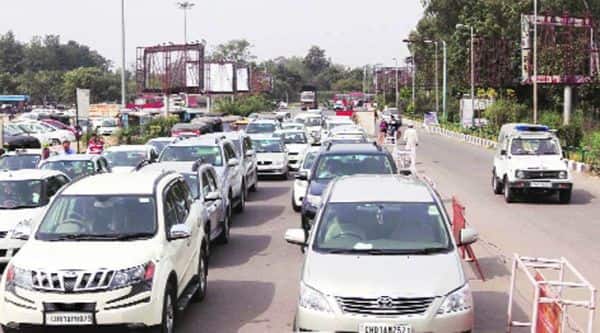 For providing VIPs an easy and safe access to the railway station, the railway police of Haryana has made the life of thousands of ordinary travellers miserable.

It has disallowed private vehicles into the main lane leading to the station’s entrance, leaving only a narrow lane for the general public, which witnesses traffic logjams at rush hour every day, unnecessarily holding up people who are in a hurry to catch trains.

As scores of vehicles clog the stretch between the main gate and the entrance, people who have trains to catch get down from the vehicles and trudge to the station, pulling their luggage, winding their way through the maze. Among them are the aged, women and children.

It started about a month ago after a visit by Railway Police IG Shrikant Jadhav.

Said Ramesh Kumar, SHO of Railway Police, “On January 10, the IGP took a round of the railway station and found lacunae in the security system for the VIPs.  He asked us to discuss the issue with the railway authorities and come up with a solution.”

He added, “We then proposed to start separate lanes for VIPs and for the common public. The suggestion was accepted and orders issued to implement it.”

Policemen on duty said that since then long traffic jams, particularly at the time of arrival and departure of the Shatabdi Express, had become a regular feature and sometimes these last an hour.

“People argue with us, and fight with us, but what can one do? We are just implementing the orders passed by our seniors,” said a police official.

Another said the problem was compounded because there was not enough traffic police to regulate the flow and ensure orderly traffic. Besides, the lane meant for the general public, which was also used by taxis, was narrow, he said.

“There is this empty double lane for the so-called VVIPs, and on the other hand this narrow lane for the public is jam-packed. This is intolerable,” said Anjum as she struggled to reach the station, carrying her baby and also pulling her luggage, on Tuesday.

Sukhwinder Singh, who had come to drop a relative, said it took him 20 minutes to reach from the front gate of the station to the entrance. “It was a harrowing experience negotiating this short stretch,” he remarked.

H R Juneja said the police did not let him enter the empty lane, saying it was only for red-beacon cars. “How many people use it? This is very wrong, they are creating unnecessary trouble for the general public,” he said.

However, Shrikant Jadhav would have one believe that the conditions at the railway station were “more chaotic before the orders were passed’’.

“There was traffic on both lanes and people used to park their vehicles in the first lane, causing security threat to the railway station and VIPs. Hence we took the decision where the lanes were differentiated and vehicles were not allowed to park near the entrance of the station,” he said.

Jadhav said he had visited the station twice after the orders were passed and found no problem.

“However, if you say that people are suffering, then I will visit the station again tomorrow during the time of the arrival of Shatabdi and will review the situation. If required, measures will be taken to improve the situation,” he said.