Military Digest | Op Trident: When Indian Navy struck at the heart of Pakistan 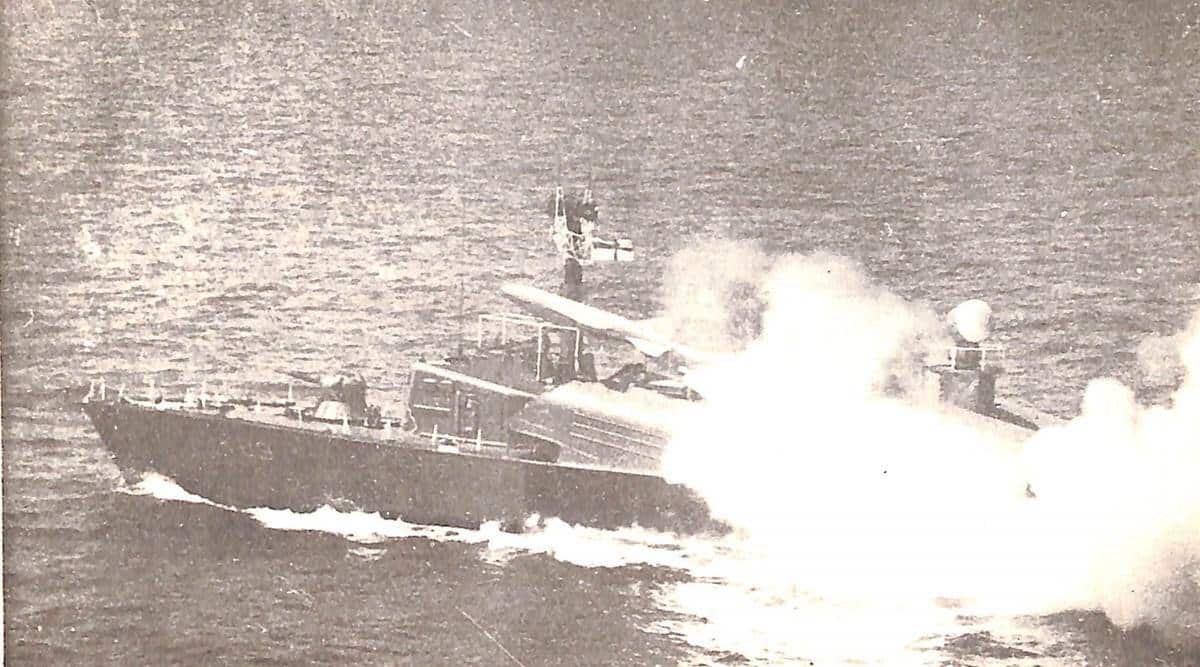 One of the Vidyut-class missile boats which took part in Operation Trident in 1971. (Express File Photo)

The Indian Navy went into the 1971 war with a lot to prove. This stemmed from the baggage of the 1965 war. At the time the government preferred that the Navy adopt a defensive posture for strategic reasons. Matters weren’t helped by a Pakistani raid on the pilgrimage centre of Dwarka on the Gujarat coast. A light cruiser and six destroyers sailed to within the range of the town and shelled it. There was no military target in the area, the choice of objective was pure bigotry. But the flotilla managed to evade detection adding to the Indian Navy’s discomfiture.

The period 1966-71 saw naval power getting some much-needed attention with the addition of modern warships, this time of Soviet origin. In the run-up to the 1971 war the Navy planned to strike at Karachi, Pakistan’s commercial and financial capital and main naval base destroying naval vessels, harbour installations and economic targets. Admiral SM ‘Charles’ Nanda who took over as Naval Chief in 1970 was determined to raise the Service’s profile with an aggressive foray. It helped that he was a meticulous planner with a penchant for thinking out of the box. In addition, commanders serving under him were of the highest calibre.

Nanda’s chosen instruments of assault were the recently acquired Soviet Osa/Vidyut class missile boats. After the 1965 war when Britain refused to supply any more modern warships India turned to the Soviet Union.

Also Read |9 Para commandos and their exploits across enemy line

The principle behind missile boats’ employment is based on the doctrine of mobility over armour protection and firepower. The advent of proper guided missiles and electronic countermeasure technologies gave birth to the idea that warships could now be designed to outmanoeuvre their enemies and conceal themselves while carrying powerful weapons. Small, lithe and fast, packing a big punch the Osas were however limited by their small range, endurance and radar reach which necessitated their employment for coastal defence. As we shall see, Nanda and his boys used innovative methods to carry this powerful striking ability to the enemy’s shores to launch a devastating attack. Each boat carried four SS-N-2 (P-15) Styx missiles with a range of 80 kms guided by radar. In 1967, two Egyptian Komar-class boats operating as a coastal missile battery from within Port Said harbour fired four Styx missiles at the Israeli destroyer Eilat sinking her with heavy loss of life. This heralded the missile era in naval warfare with the Indian Navy showing interest in the system. Eight Osa boats were acquired and renamed the Vidyut-class.

Nanda’s plan was to use the element of surprise and overwhelming firepower to strike Karachi with a combined force built around the missile boats on the very day that Pakistan launched its aggression. On 4 December 1971 the Karachi Strike Group was formed off Okha consisting of the three Vidyut-class missile boats: INS Nipat, INS Nirghat and INS Veer, two Petya/Arnala-class anti-submarine corvettes: INS Kiltan and INS Katchall, and a fleet tanker, INS Poshak. Commander (later Commodore) KP Gopal Rao, the Commanding Officer (CO) of INS Kiltan commanded the task force. Commander (later Commodore) Babru Bhan Yadav embarked on INS Nipat was the commanding officer of the 25th Missile Boat Squadron (now known as the Killers). Nearing Karachi, he would allocate targets to the boats who would thereafter act independently while keeping in communication with him. One missile boat was to remain on patrol off Dwarka in order to provide cover for the force on its way back.

The task of the Petyas was to provide command, control and communications, and using their better radar, acquire appropriate targets and deliver warning of enemy aircraft. In the event of an emergency, they could give a hand by towing a boat or provide refuelling facilities.

Also Read |How the Marathas mastered Israeli mortars in 1971

On December 4, the task force concentrated 250 nautical miles (nmi) south off the coast of Karachi maintaining its position during the day hidden from Pakistani air surveillance. The attack was planned to take place at night to preclude any air attacks. By 10.30 pm Pakistan Standard Time (PKT), the Indian task group had sailed 180-nmi from its concentration area towards Karachi. At this point Pakistani warships were detected 70-nmi to the northwest and northeast of the Indian strike group. The stage was now set for a most devastating attack on Pakistani warships and economic targets. INS Nirghat (commanded by Lieutenant Commander Inder Jit Sharma) moved forward to the north-west and fired its first Styx missile at PNS Khaiber, a Battle-class destroyer at 10:45 PM (PKT) hitting its right side. An explosion took place in the first boiler room. Seeing that Khaiber was still floating, Sharma fired a second missile hitting the ship in the second boiler room. Khaiber now sank with the loss of 222 sailors. Nirghat had drawn first blood!

The others weren’t far behind. INS Nipat commanded by Lieutenant Commander BN Kavina acquired two targets to the north-west firing missiles at each one at 11 PM (PKT) hitting both. Merchant Vessel Venus Challenger was carrying ammunition for the Pakistan Army and Air Force from Saigon. It blew up with a tremendous flash and bang. The loss of its cargo played a major role in Pakistan’s acceptance of the ceasefire on 17th December. The other target, the C-class destroyer, PNS Shah Jahan was badly damaged leading to its eventual scrapping.

PNS Muhafiz, an Adjutant-class minesweeper now loomed large on INS Veer’s (Lieutenant Commander OP Mehta was the captain) radar. A Styx was fired at it at 11:20 PM (PKT) striking it on the left just behind the bridge. It sank within no time with the loss of 33 hands. In fact, since it had no time to send off a distress signal its fate remained unknown for over 24 hours. Nipat continued towards Karachi positioning itself 14 nmi south of the harbour and firing two missiles. One struck the Kemari oil farm causing a spectacular fire. The loss of strategic oil reserves was another factor behind Pakistan being rendered unable to carry on the war. The Indian Air Force also played a vital role in this, striking the oil tanks on the same day in an independent operation. Nipat’s second missile launch was aborted during the firing sequence. The task force then withdrew.

Also Read |The epic role of helicopter units in 1971

After a most successful operation, the radio silence was broken to send out the success code ‘Angaar’ to Vice Admiral SN Kohli, Flag Officer Commanding-in-Chief, Western Naval Command in Bombay. A number of enemy ships had been sunk, Pakistan’s oil reserves set on fire and Karachi put in the shadow of fire and smoke. All this without loss of any kind!

Operation Trident was an unqualified success. Not quite – there was some disquiet over inadequate targeting of shore installations because of some confusion in command. A second raid was ordered a few days later which will be described separately.

Pakistani air retaliation having been anticipated; the Indian Navy had moved the missile boats to safer havens. Therefore, the attack on Okha only succeeded in scoring hits on fuelling facilities, the jetty for missile boats and an ammunition dump. Operation Trident, however, caused a number of jittery reactions among the Pakistan Navy and Air Force in their search for Indian naval vessels. Naval observers on board a civil Fokker Friendship airliner incorrectly identified the River-class frigate, PNS Zulfiqar as an Indian missile boat even though it was at anchor. F-86 Sabre fighters of the PAF were scrambled from Drigh Road to strafe the unfortunate ship causing casualties and damage. Lack of an air reconnaissance capability hampered the Pakistani response which was weak.

Thereafter the Pakistani fleet was withdrawn into Karachi harbour leaving the Indian Navy the masters of the Arabian Sea.

The victory in the sea battle off Karachi achieved at stand-off distances further cemented the belief of naval strategists that missiles were the future of maritime warfare. A large number of awards were given to officers and men of the strike force. This operation was considered to be one of the most successful in post-World War 2 naval history with the Indian forces suffering no losses.

To commemorate this victory, the Indian Navy annually celebrates Navy Day on December 4. In maritime warfare, boldness and innovation combined with a deep longing for victory always pays off. One can safely conclude that Operation Trident had a strategic effect on the course of the 1971 war.

Please contact the writer with your military story on msbajwa@gmail.com or 093161-35343