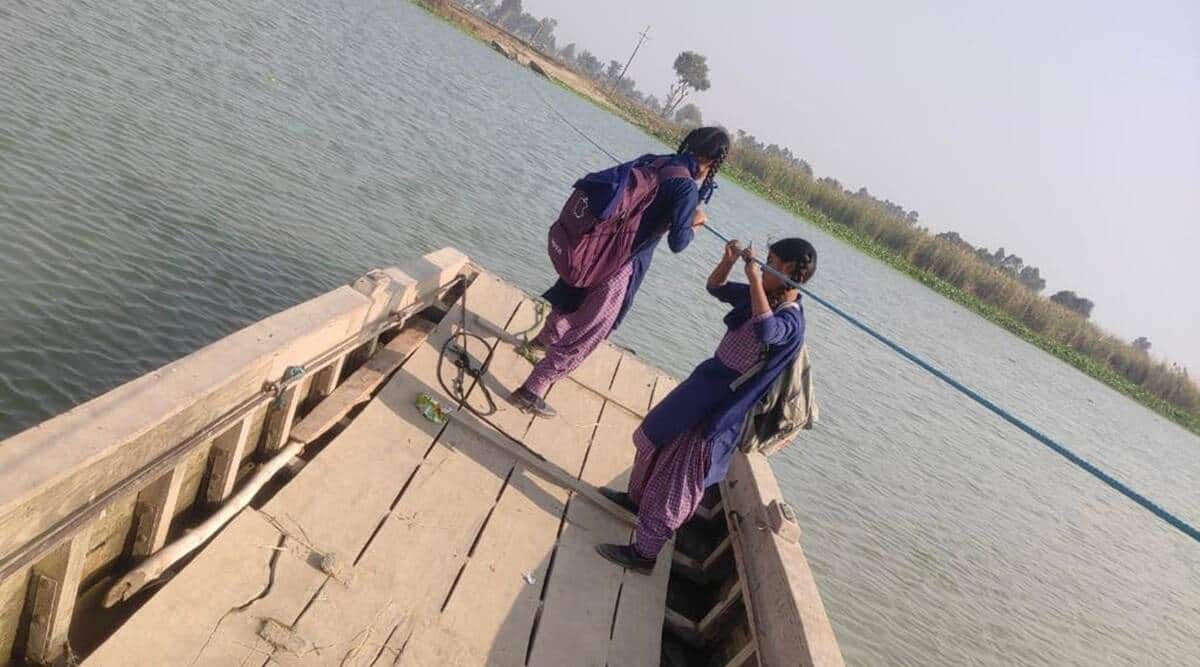 Kareena Kaur and Kirna Rani on their way to school in Punjab’s Ferozepur district. File

A Punjab government panel has recommended setting up a pontoon bridge to help facilitate two girls from a village in Ferozepur near India-Pakistan border, who have to take a boat ride and then walk 4-kms to reach a senior secondary school. The panel also suggested that the girls from Kaluwara village, surrounded on three sides by waters of the Sutlej river and by the intentional border fence on the fourth, be shifted to a hostel in city if their parents agree.

The four-member committee was constituted after the National Human Rights Commission (NHRC), taking suo motu cognizance of The Indian Express report on the girls, had issued a notice to Punjab government over “lack of proper education facilities for children in the Sutlej surrounded border areas”.

The Indian Express report highlighted how Kareena Kaur (12) and Kirna Rani (13) from Kaluwara cross the river on bedi, a boat that is manoeuvered using an overhead cable or rope tethered to poles on either ends of the bank, and then walk to Gatti Rajoke village every to attend classes at the Government Senior Secondary School there. While the village has a primary school, children have to move to other villages to access high school, and boat is the only medium to cross the river.

The panel found that the government primary school was setup in the village in 2020-21 in which 25 students are currently enrolled but it doesn’t have a permanent teacher. The report adds that “village residents demanded that a permanent teacher be posted in the school”.

The report says that the “committee feels that setting up of a pontoon bridge can facilitate students who move to other village via boat to access senior secondary school”. It also recorded the statement of Satinder Singh, principal, government senior secondary school, Gatti Rajoke, who said that currently two girls and eight boys from Kaluwara were enrolled at his school and “they have to cross a river on boat to reach the school travelling about 4 kms”.

“If a pontoon bridge is setup, the movement of the students, village residents and BSF or Army personnel can be facilitated. The committee, however, feels that CPWD is the right authority whose services can be procured to setup a pontoon bridge from Kaluwara to Gatti Rajoke,” read the report.

The team also found that at least 11 children from Kaluwara also go to Government Middle School, Nihale Wala village, which is around 3 kms away, to attain education from classes 6 to 8. According to the report, the BSF officials informed that they erect a pontoon bridge every year, which can be used for 7-8 months only, as “the bridge is removed/snapped during the rainy season with the rise of water level in the river”, leaving no option for students but to ride a boat.

“It was advised by the Company Commander, BSF, that CPWD should be intimated about the need of keeping the temporary pontoon bridge working for at least 9-10 months or some other arrangements must be setup to tackle the troubles in rainy months of July, August and September,” read the report.

“If the makeshift pontoon bridge can be setup for 9 to 10 months, students in classes 6 to 12 can continue their education without any disruption,” it added.

The committee further recommended that during rainy season, “from July to September, the students, with due permission of their parents, can be shifted to free hostels in government senior secondary schools in Ferozepur to get hassle-free education…Kaluwara is situated around 13 km from Ferozepur city”.

The Ferozepur district administration has also provided safety gears such as lifesaving jackets to students for now, adds the report.

ADC Setia said: “We will do everything possible to ensure that children from Kaluwara are not devoid of education. A reply to the NHRC notice has been submitted in time.”

Demonetisation hearing in SC: Govt, RBI in ‘symbiotic’ relation, one shutting ears to other not right way: AG