The Congress MP Bittu showed no interest in meeting Khalsa as the group was stopped by the police at the gate. 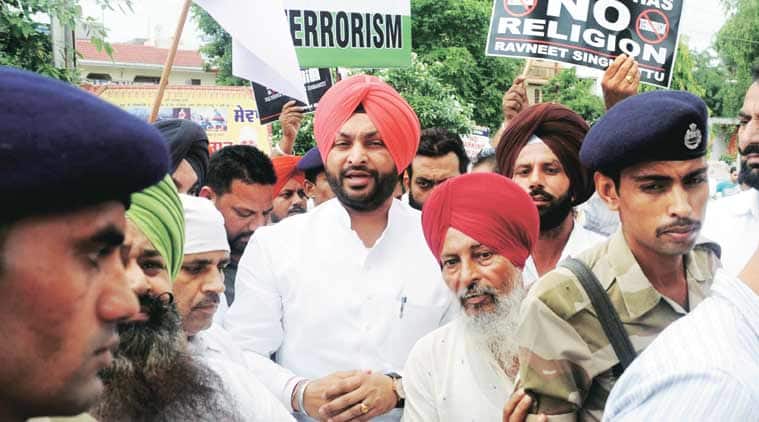 MP Ravneet Bittu (center) with the suppoerters outside the DMC&H where Surat Singh Khalsa admmitted in Ludhiana. (Source: Express Photo by Gurmeet Singh)

Ludhiana MP Ravneet Singh Bittu on Saturday said the protest and demands of Surat Singh Khalsa – who has been on a hunger strike since January – were “unjustified” and that “it is acting as a catalyst for Khalistan separatists” who are considering “Khalsa as their supporter and getting encouraged.” Khalsa is demanding the release of Sikh prisoners who he claims have completed their terms.

The Congress MP Bittu, who along with MLA Bharat Bhushan Ashu and other Congress leaders reached DMCH where Khalsa is admitted, showed no interest in meeting Khalsa as the group was stopped by the police at the gate. They said they only wanted to perform a peaceful ‘ardaas’ and send a message to Khalsa and his supporters that the fast must end “to keep Punjab peaceful.”

“The Gurdaspur terror attack has shown how Punjab is sitting on a volcano. It can erupt any time. How can terror convicts or what Khalsa calls Sikh prisoners be released till the court does not give a verdict in their cases? Tomorrow, if any untoward incident happens in Punjab, Khalsa cannot disassociate himself with it because his fast is misleading and sending out a wrong message,” said Bittu, whose grandfather, former chief minister Beant Singh, was assassinated in 1995.

Claiming that the inaction of SAD-BJP government on the Khalsa issue would soon push back Punjab to the 1990s when the Khalistani forces were active in the state, Bittu said, “I appeal to Khalsa to end his fast if he wants peace to prevail in Punjab. Even if he wants release of prisoners on humanitarian grounds, he should understand that his concern is being converted into sympathy for terrorists by anti-social elements who can take undue benefit of this situation.”

“Both Khalistan and terrorists in Pakistan are working to make Punjab target again. The hard-earned peace in Punjab cannot be sacrificed at any cost and Khalsa should end his fast immediately. If Khalistanis and cross-border terrorists join hands, it will be a disaster for Punjab,” said Bittu.