The SKM, after a review meeting at Singhu border, said that on January 31, they will observe a “Vada Khilaafi Diwas” to protest against the Centre for not fulfilling any of the promises on the basis of which year long agitation was withdrawn on December 11, last year. 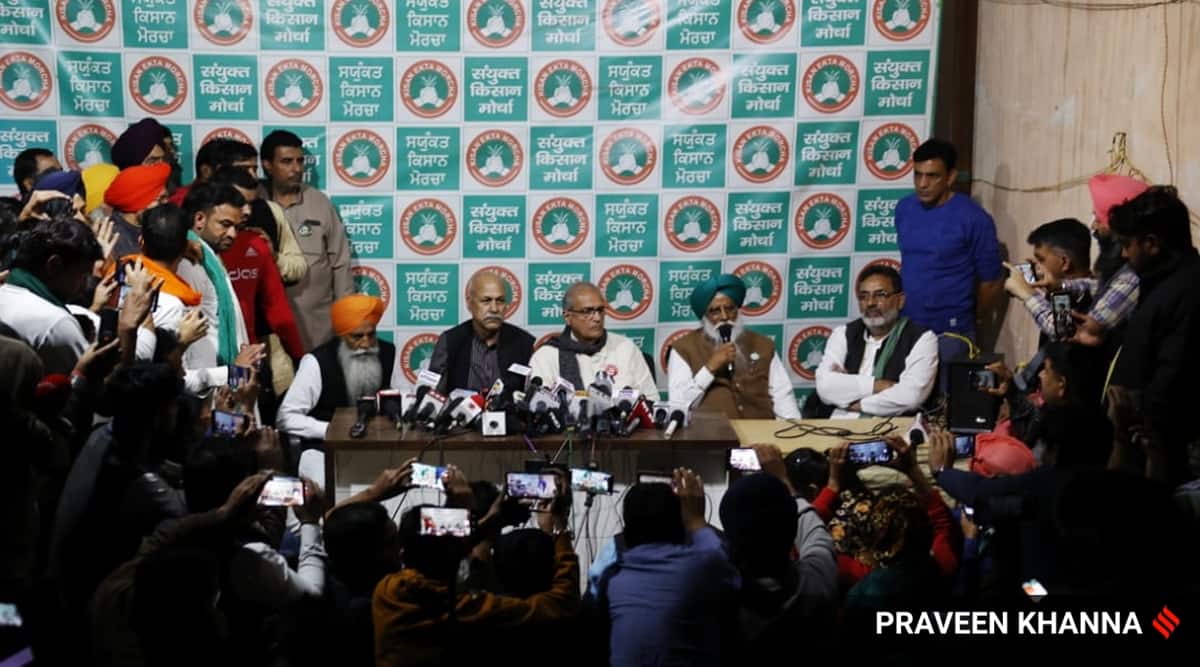 The farmer unions contesting the Punjab Assembly polls will no longer be part of the Samyukt Kisan Morcha (SKM) and cannot use its name during the election campaign, the umbrella body that spearheaded the agitation against the now-repealed agri laws Saturday said. The SKM, after a review meeting at Singhu border, said that on January 31, they will observe a “Vada Khilaafi Diwas” to protest against the Centre for not fulfilling any of the promises on the basis of which year long agitation was withdrawn on December 11, last year.

“For 13 months, we did not allow any leader from any political party on our platform. This decision [of our associates to float a political party and contest elections] has been taken in haste and we are not in agreement with it. Jo Jo sangathan chunav mein gye hein, wo Samyukt morche ka hissa nhi rahenge. [those organisations that are contesting polls, they will not be a part of SKM]. After four months, in April, we will review and deliberate to decide what sort of a relationship we will have with them. For the time being, they are not a part of SKM,” said Yudhvir Singh, general secretary of Bharatiya Kisan Union, after the five-hour review meeting.

Joginder Singh Ugrahan, BKU Ugrahan president, clarified that this was not a suspension. “We have not broken ties with any union. We are talking of ties with Samyukta Samaj Morcha (SSM), which is now a political front. Those associated with them will not be a part of SKM,” he said.

In a statement, SKM said, “The SKM has made it a limitation that no political party can use its name, banner or platform. The same rule applies in elections as well. The name or banner or platform of the SKM shall not be used by any party or candidate in the election. Any farmer organisation or leader associated with the SKM, contesting elections, or who plays a key role for any party in the election, will not remain in the SKM.”

On December 25, a group of 22 farmer organizations, who were a part of SKM, had floated SSM declaring that BKU (Rajewal) chief Balbir Singh Rajewal would be the face of the front. They had announced that they will contest all 117 seats in the Punjab Assembly elections. Earlier same month, Gurnam Singh Chaduni, chief of Haryana unit of BKU, had launched a political outfit called Samyukta Sangharsh Party (SSP). He too had said the party planned to contest on all seats in the Punjab polls, adding that he would not contest elections.

Referring to SSM and SSP, Ashok Dhawale, president, All India Kisan Sabha, said, “They have formed a political party. Our principle is that political parties cannot be a part of SKM. For the time being, we have given them a relaxation. After the elections are over, we will consult and take a decision on their involvement in future.”

Sources said a major disagreement among the farm leaders at Saturday’s meeting was on the issue of farm unions contesting elections. When the matter of their suspension from SKM was raised, Chaduni argued for farm organisations to participate in polls, reiterating that several other leaders from SKM had contested elections.

“Hannan Mollah has been elected to Lok Sabha eight times. Rakesh Tikait has fought elections, Yogendra Yadav is associated with a political party. So can it be said that the morcha has not been political. If people are suspended, then the rule must remain the same for all including the comrades here. I will not fight elections myself…mein election ladwaunga. I do not hold position in any political party,” said Chaduni at the meeting.

Rajewal did not attend the meeting, with SKM leaders attributing his absence to ‘personal commitments’.

The SKM also said that on January 31, they will observe “Vada Khilaafi Diwas” to protest against the betrayal and inaction of the government on all the demands of protesting farmers — formation of a committee on MSP, immediate withdrawal of cases against protesting farmers, compensation to families of martyred farmers, discussion on electricity amendment bill — which, the leaders said, the government had agreed to in principle and in writing on December 9. The SKM leaders said if the government continued to remain apathetic to its demands and there is no dialogue, from February 1, it will launch “Mission UP” and “Mission Uttarakhand”.

Yudhvir Singh, said, “Since we suspended the agitation on December 11…there has been no contact from the government. It had assured that cases against protesters would be withdrawn immediately, neither the cases have been withdrawn nor any compensation provided. So, we have decided that we will observe a ‘vada khilaafi diwas’, where at every block, district and tehsil headquarters across the country, the effigies of the government would be burnt and large scale demonstrations would be held”.

He added that if the government continued its stubborn attitude, we will launch “Mission UP”.

Dhawale, said, “This essentially means that we will start a campaign and organise rallies as part of Mission UP and Uttarkhand to mobilize opinion against BJP in these states. Cases were filed against protesters during the farm agitation and during rail roko agitation earlier. Only the Haryana government has done some paperwork, but they have not said anything about compensation. I went to Karnataka, Tamil Nadu, Tripura,…no government has withdrawn cases and Centre also has not sent any communication to them regarding the same”.

Demanding dismissal of Union Minister of State Ajay Mishra Teni for his alleged role in the Lakhimpur Kheri incident, SKM said that it would announce a permanent morcha in the UP district. They said that BKU leader Rakesh Tikait will lead a group of SKM members and go to Lakhimpur Kheri on January 21 for three days and meet the victims, their families and officials and if there is not a satisfactory response, then a ‘morcha’ will be started.

Yudvir Singh said, “The SIT report makes it clear that it was not an accident, but a planned conspiracy. The conspiracy was carried out by Ashish Mishra on the directions of his father, who continues to serve as a Minister in the Union cabinet. This implies that the government is shielding criminals and is concerned only about its vote bank”.

The farm leader said that the government “has instead slapped murder charge (section 302) on farmers named in the incident” and put them in jail.

SKM further said it would support the call for a nationwide strike called by central trade unions of the country on February 23 and 24 on issues of withdrawal of the four anti-labour codes, MSP to farmers and against privatization.

“The majdoor sangathan supported us for 13 months during the agitation. SKM will endorse and support this call in the form of a rural strike,” said Dhawale.