Chandigarh: Dust storm brings down mercury, Met Dept says there may be more breaks from heat

The meteorological department has predicted overall dry weather in the region in the next 60 hours and the possibility of a heatwave in isolated pockets across Haryana and Punjab over the next 24 hours. 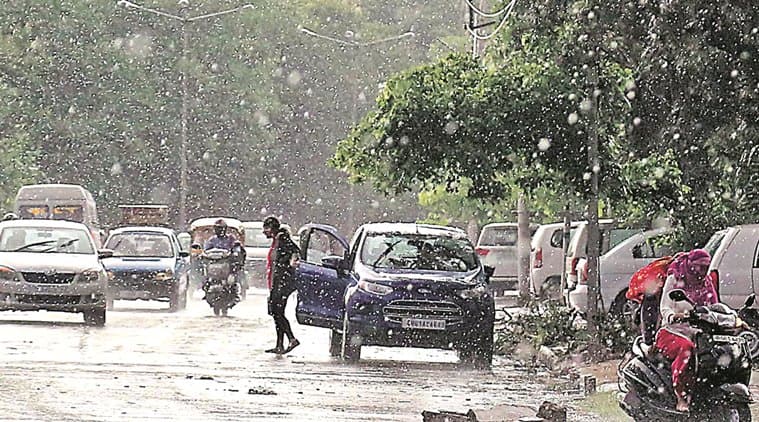 Commuters during rain after heavy dust storm in Chandigarh on Friday, May 20 2016. Express Photo by Kamleshwar Singh

A dust storm swept through parts of Tricity on Friday evening, pulling down the mercury by nearly 10 degrees and bringing some cool, but in the process felling a few trees and tripping the power supply in some places. There was a scattering of rainfall too.

The weather office held out hope that there might be more breaks from the heat in the coming days.

The meteorological department has predicted overall dry weather in the region in the next 60 hours and the possibility of a heatwave in isolated pockets across Haryana and Punjab over the next 24 hours.

But there is a possibility of thunder showers on Monday, the met office said.

“The city will experience mainly clear skies in the day with clouds in the evening on May 21 and 22. On May 23, however, certain parts of the city may experience thunderstorms and light showers towards the evening. These showers may lower the temperature by 2-3 degrees Celsius,” the duty officer of Meteorological Department told Chandigarh Newsline.

“Most of the temperature fall in the city can be attributed to the winds in certain isolated parts of the city during evening and night in the last two days. While the city may not witness a heatwave on May 21, regions in Haryana are likely to experience it,” the duty officer said.

The city experienced a maximum temperature of 41 degrees Celsius on Friday.

The fire department and helpline of Chandigarh Municipal Corporation received around 12 calls about uprooted trees in different sectors such as 7, 9, 10, 11, 17, 18, 23 and 34. A total of five cars were damaged in Sector 18 after a tree fell in the residential area.

School Nationals Champions: Fighting with the fists, following in the footsteps of their fathers