Even after the completion of this pending work which may not be a reality by September-end, multiple tests have to be carried out before releasing water formally. 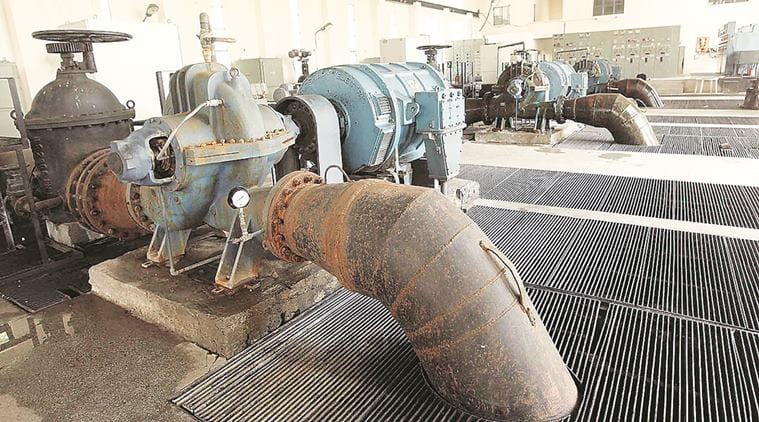 At present, UT gets 85 MGD. Of this, about 58 MGD comes from Kajauli waterworks, Phases I, II, III and IV and the remaining 27 MGD is generated through 250 tubewells. (Express archives)

Chandigarh residents will have to wait for three months more to get the additional 29 million gallons daily (MGD) water.

For, the work on main intake structure at Kajauli waterworks, construction of underground storage tank, pumping room and machinery at Sinhpur village (25 km from Kajauli) which has to further take water to Sector 39 waterworks from the phase V and phase VI at Kajauli is yet to be completed.

R K Gupta, superintending engineer of the Punjab irrigation department, said that they had called tenders for construction of main intake structure but they have to recall the tenders since only one firm applied.

The main water intake structure has to be constructed to bring water from the Bhakra mainline canal to Kajauli and beyond. The intake structure helps in drawing water from the source (Bhakra mainline canal) over predetermined pool levels and then to discharge this water into the withdrawal conduit called intake conduit, through which it will flow up to the water treatment plant.

Sources said even after allotment of the tender, it will take around two months for the structure to be completed.
Devinder Singh, superintending engineer of GMADA, said that GMADA has already laid the pipelines from Kajauli to Sinhpur and it was Chandigarh Administration which is yet to complete its work of tank and pumping there.

However, an official of Chandigarh municipal corporation said that they will complete the work of storage tank and pumping soon.

Even after the completion of this pending work which may not be a reality by September-end, multiple tests have to be carried out before releasing water formally.

The project of phase V and VI from where Chandigarh is to get additional 29 MGD has missed several deadlines.

This year too, a deadline of April 30 had been set by UT Administrator V P Singh Badnore and Mayor Davesh Moudgil. Both had visited the Kajauli waterworks in February. They had set a deadline for the officials that the city should get additional water from May 1.

At present, UT gets 85 MGD. Of this, about 58 MGD comes from Kajauli waterworks, Phases I, II, III and IV and the remaining 27 MGD is generated through 250 tubewells. In summer, the demand goes up to 116 MGD and a gap in demand and supply arises. In winter, the demand does not go beyond 85-90 MGD.

For water to reach Chandigarh from the Kajauli waterworks, water is lifted from the Bhakra main canal, SYL. The water is supplied to the Sector 39 Water Treatment Plant (WTP) in Chandigarh through four pipelines, Phases I, II, III and IV. Phases 1, II and IV are maintained by Punjab while Phase III is maintained by Chandigarh Municipal Corporation.