Charanjit Singh Channi replaces Amarinder Singh, who had stepped down as CM on Saturday. A legislator from Chamkaur Sahib, Channi has been a CLP member and Leader of Opposition in the previous SAD-BJP government in the state. 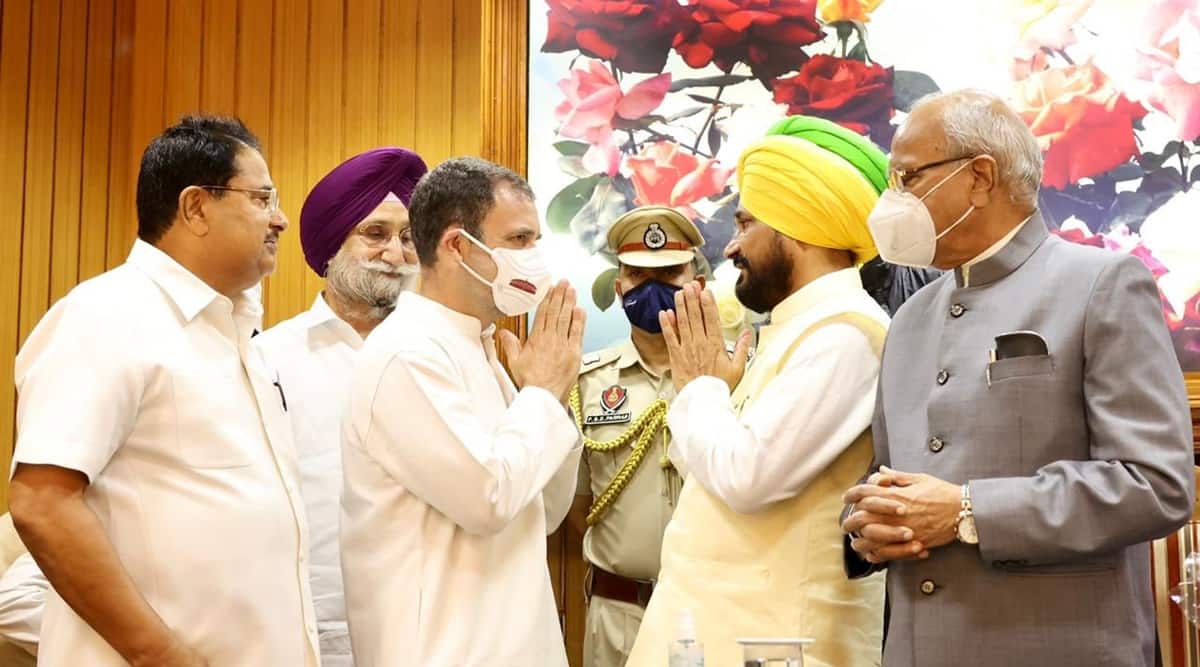 Punjab Governor Banwarilal Purohit on Monday administered an oath of secrecy to the trio. While Channi is from the Malwa region of Punjab, both Randhawa and Soni are from the Majha region of the state. In naming the three top leaders of the government, the government has tried to maintain a caste balance by getting a Dalit as CM, a Jat Singh, and a Hindu each as Deputy Chief Ministers.

Channi (58) replaces Amarinder Singh, who had stepped down as CM on Saturday. Channi’s appointment came after hectic lobbying by the Congress leaders with an unusual Sikh versus Hindu CM narrative thrown into the mix.

Former Chief Minister Amarinder Singh and former PPCC chief Sunil Jakhar gave the ceremony a miss. Channi will meet Captain at his Siswan farmhouse today after formally taking the office in Punjab Secretariat. He will later address the media.

In Soni’s name, the Congress sprung a surprise as on Sunday evening Congress leader Pawan Bansal had congratulated Mohindra and Randhawa on Twitter for being tipped to be the Deputy CMs. Mohindra, who stayed away from the ceremony, told The Indian Express, “I was never informed about anything. I did not get an invite from the CM. But I am a loyal soldier of the party and I will abide by their decision.”

Channi had been vocal in raising the Dalit issues in the state and had recently rebelled against Amarinder. He is considered close to AICC leader Rahul Gandhi and became the choice of the Congress high command for the post after two Jat Sikhs Sukhjinder Singh Randhawa and PPCC chief Navjot Singh Sidhu opposed the party’s move to appoint a Hindu leader Sunil Jakhar.

After the decision was taken, however, several leaders told The Indian Express that the appointment of a Dalit in a state with nearly 32 per cent Dalit population was a “sound political decision” — given that all opposition parties have been wooing the community. While the Akali Dal has tied up with BSP and promised to make a Dalit the Deputy CM, AAP is banking heavily on this votebank. The BJP had also spoken about making a Dalit the Chief Minister if voted to power.

While the main opposition Aam Aadmi Party welcomed Channi’s appointment, the Shiromani Akali Dal did not issue any statement. The BJP, meanwhile, raked up a controversy when an IAS officer in 2018 had alleged that he had sent her an inappropriate text.

Channi’s wife Kamaljeet is a doctor, and the couple has two children. His elder son Navjeet Singh, a graduate from PEC University of Technology, is now studying law.