According to the CCTV footage, the incident took place around 10.30 pm. The suspects took around 15 minutes for stealing the cash. 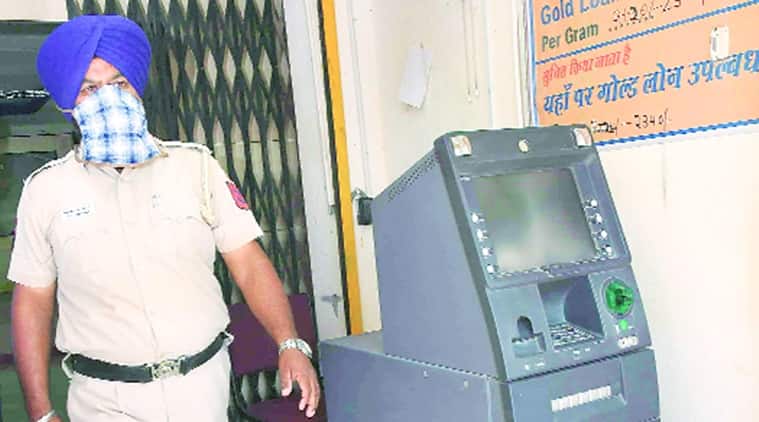 Police at the ATM in Kishangarh village, Chandigarh on Thursday. Express photo.

A day after the gunpoint robbery of Rs 5 lakh from Punjab National Bank in broad daylight in Mohali, unidentified people stole Rs 7.64 lakh from the ATM booth of Union Bank of India at Kishangarh village near Mani Majra, Wednesday night.

Police said, suspects did not break the ATM and opened it by applying the code number of the machine, as per the footage captured in the CCTV camera installed inside the ATM.

The ATM booth is situated inside the bank premises. Even as the bank closes by 5 pm, the ATM facility is open for the general public round clock. No security guard has been deputed for the night hours. Police said, the code number of the ATM booth was known to only two people, including the bank manager, Parveen Aggarwal, and another officer, MV Abhney.

According to the CCTV footage, a masked man entered the ATM booth, switched off the lights, went to the rear side of the ATM, stole the cash and came out. Police said, apparently, two people were involved in the crime. As one stole the cash, another person stood guard outside the ATM.

The incident came to light on Thursday morning. Bank manager, Praveen Aggarwal, reported to the police that one of the wire of the ATM was cut off.

He also reported that there was an alarm at the ATM, which automatically blew if someone touched the rear side of the ATM machine but this time it did not work.

A police officer said, “There is no sign of forceful entry and breaking of ATM. Allegedly, one of the culprits applied the password and stole the cash.”

According to the CCTV footage, the incident took place around 10.30 pm. The suspects took around 15 minutes for stealing the cash.