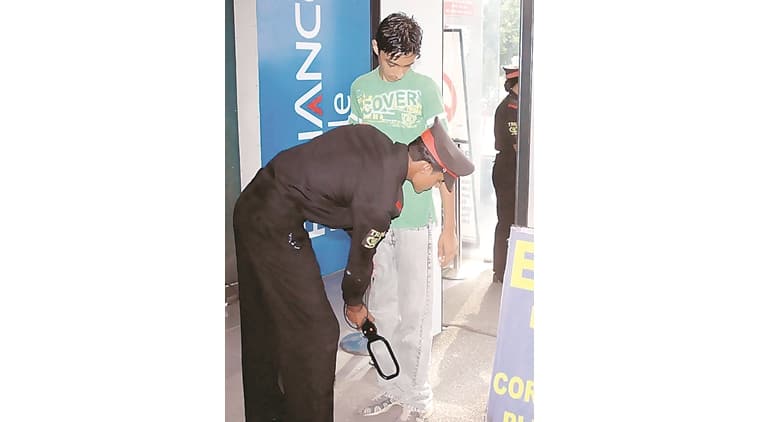 A private security guard frisks a visitor at the entrance of a shopping outlet in Chandigarh. Express Archives

The central government has picked Chandigarh for setting up a centre for imparting training to security guards employed with different private agencies registered in the city.

Chandigarh was chosen for the pilot project under Private Security Agencies (Regulation) Act 2005. This will be the first such centre in the country.

The decision was taken during a meeting in New Delhi on Thursday.

The month-long course for the security guards will including both classroom instructions and field training. The security guards will be given training in public conduct, crowd control, first aid, fire fighting, emergency handling, communication with police and conflict management. They will also be imparted training in physical security, security of assets, security of building and personal security.
The guards will be taught how to examine identification papers, including identity cards. They will also be taught to identify improvised explosive devices (IEDs).

Deputy commissioner Ajit Balaji Joshi said Chandigarh has been picked for the pilot project by the Centre under which a training school for private security guards will be set up.

To create database of security guards

According to the official records, there are 103 registered private security agencies operating in Chandigarh.

Joshi said there are around 10,000 security guards employed with the private agencies in the city.

However, the administration has no record of these guards. “Under the project, a complete database of all the security guards will also be made after conducting proper verification,” he said.

The administration will also frame a guideline for safe transport of cash to ATMs and banks through cash-in-transit vans.

Last week, Joshi held a meeting with the Indian Banks’ Association (IBA) to discuss the issue.

Earlier, there has been incidents where cash vans were robbed. In June 2014, criminals looted Rs 5 lakh cash from a bank’s cash van and also left a security guard injured. The incident took place outside the State Bank of Patiala at its Khuda Ali Sher branch.

In another incident on March 9 last year, a van carrying cash of Rs 1.34 crore of a bank, heading from Chandigarh to Rajpura, was looted by armed dacoits.

Be careful! Antibiotics can make you more prone to infection