Book nook: From Punjab’s art and culture to the art of love, four books you should read this week Chandigarh-based novelist and columnist Vani Kaushal’s third and latest book, ‘Seconds Later’, explores the other side of fame.

From stories about Punjabiat to the years of terrorism in Punjab, poems on love, lust and loss, to fiction on problems branching out of fame, stay updated with the latest literature offerings in and about Punjab with The Indian Express.

Punjab: Up, close and personal

A former bureaucrat, writer, sportsperson, and a retired officer of the Sikh Regiment, Captain Narinder Singh is a multifaceted personality, whose book, ‘Vibrant Colours of Punjab’ was released this month.

The book looks closely at the history of art, literature, culture, cinema and music of Punjab. “I set out on the path of writing something from the heart, only because of my passion and conviction that an untold story about the vibrant art and culture of Punjab must be shared with the world,” says Capt Singh. The book looks closely at the history of art, literature, culture, cinema and music of Punjab.

The book is a compilation of the myriad activities that Capt Singh has undertaken to promote traditional Punjabi culture, as he brings to light famous art personalities of Punjab like Harpal Tiwana, Varinder, Mehar Mittal, Jaspal Bhatti, Surinder Kaur, Rama Vij and others, bringing closer to people their tremendous contribution towards the revival of Punjabi culture.

“The attempt has been to amplify the rich traditional cultural achievements of Punjab, its traditions of Sufi saints, cinema, music, sports,” he says. Punjab, he adds, has a unique place in history due to its geographical location and he hopes that the book will act as a repository of unexplored knowledge for not only Punjabis but others interested in knowing Punjab.

Through this book, the author attempts to bring closer to the reader the beautiful rituals and customs, folk dances, soulful music, colourful festivals and the spirit of Punjab. “The book is an effort to share a wealth of information on a relatively unexplored history of art, music and culture of Punjab; so that it opens many windows to Punjabiat and unique traits of indomitable Punjabis,” sums up Capt. Singh.

Former bureaucrat S P Singh and Indu Bala Singh, a retired professor of English, have penned ‘Tryst with Sultanpur Lodhi’, a nostalgic look at the Sikh pilgrimage site. The book presents the journey in the authors’ life in Sultanpur Lodhi from 1983 to 1985, the peak of terrorism in Punjab. “This is the holy place where Guru Nanak Dev lived for 14 years on the invitation of his older sister Bebe Nanaki who was married in Sultanpur Lodhi. There’s a German word ‘Ternweh’, which means a sense of deep yearning for a place, one has never been. Sultanpur Lodhi could be such a place for many who have not visited it yet and we hope after reading this book, people from across the country visit all the gurdwaras here to bask under the holy shadow of Baba Nanak and Bebe Nanaki,” says S P Singh.

Chandigarh-based novelist and columnist Vani Kaushal’s third and latest book, ‘Seconds Later’, explores the other side of fame. Her protagonist is a young and talented TV talk show host who thinks she can handle fame, not knowing that fame doesn’t come easy – that there is a price to pay.

Talking about her new novel, Kaushal says that it was a few years in writing and came about as a result of a nudge she received one afternoon while sitting in her bedroom.

“I had a feeling like someone was looking at me and it wasn’t a well-meaning gaze. Now, it may have been a figment of my imagination but I remember feeling funny in my stomach. It was, as I leaned into that feeling, that this story came to me. What if this happened to a young girl or a celebrity? How would it disrupt her love life and career if someone approached her – or eyed her – with not the best of intentions? What would she do? How would she protect herself?”

She adds, “The book is of course on romance first but it has elements of thrill in it too. It’s a story that many of my readers in India will be able to relate to, especially women. The drama pans out across different continents which is why I think it would also appeal to an international audience,” she added.

Twenty-three-year-old, Arshya Mandhar describes her debut poetry book, ‘Cosmic Affection’ as, “My story of love, lust, and loss. It talks about my journey that started from self-doubt and ended with self-actualization. I firmly believe in making amends, loving endlessly, falling hard, craving hugs, giving chances and making mistakes as long as I am moving forward, for the let-downs are simply temporary!” 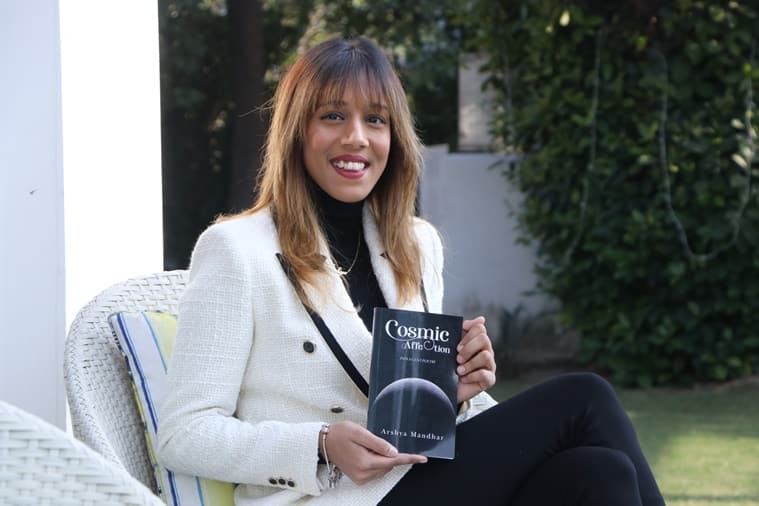 Cosmic Affection, launched this week in Chandigarh, is a collection of poems inspired by the unconventional youth along with unhindered ideas about closure.

Cosmic Affection, launched this week in Chandigarh, is a collection of poems inspired by the unconventional youth along with unhindered ideas about closure. The young poet likes to call herself an “artistic chaos” and her poetry helps her live up to that and she talks about her emotions as raw as they come and works towards spiking the lives of her readers with nothing but the truth.

Mandhar’s work is inspired by the basic nature of human beings as she struggles with the notion of convenience in people’s lives. In the end, it all comes down to the reader, as the poet requests all to practise self-love and be forever grateful for the mere accessories of life.

“Writing has always been a breath of fresh air for my mind which is why I term it ‘therapeutic’ for me. I believe that everyone has something to say and sometimes, it’s not as important for someone to listen but just important enough for you to express your thoughts,” she says.