The female cheetah’s third kill broke the pattern of the translocated cheetahs killing only spotted deer. 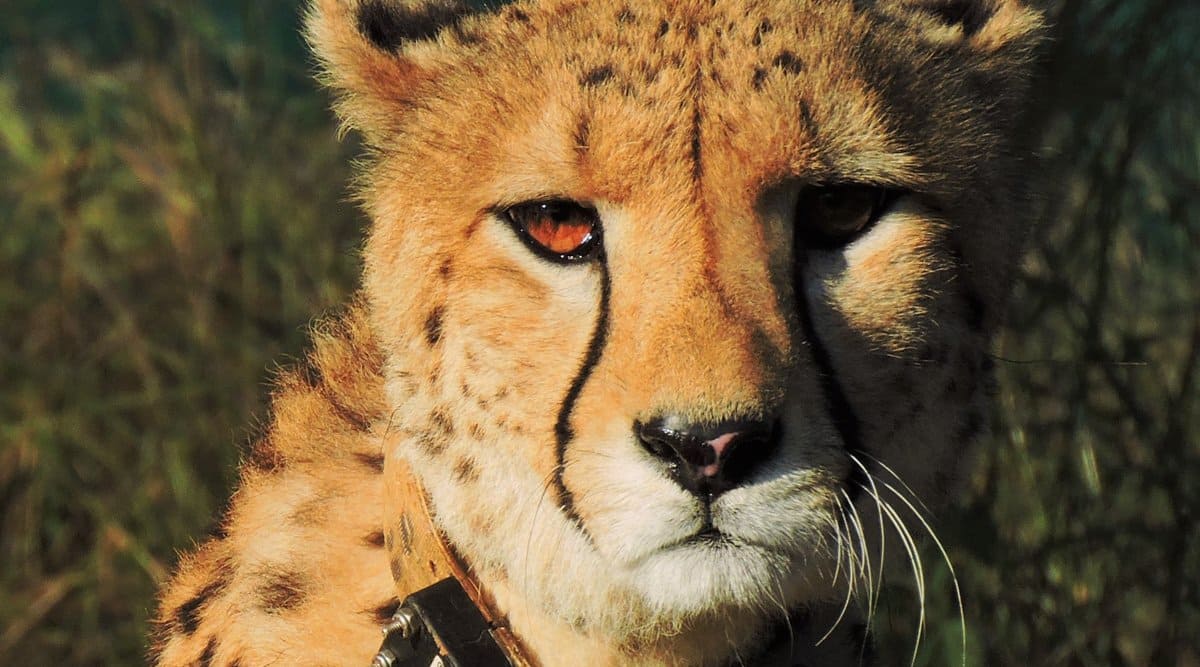 Asha's kill boosted the confidence of forest officials who were watching closely the cheetahs’ behaviour and hoping that the big cats would diversify its kill base.

Breaking the pattern of Namibian cheetahs killing only cheetals, a female cheetah, Asha, preyed on a nilgai (Asian antelope) calf in her third hunt at the Kuno National Park, on Saturday morning.

According to Madhya Pradesh forest officials, Asha killed the nilgai calf estimated to be of 25-30 kg, giving credence to the belief that the African big cats will eventually diversify their kill base. Speaking to The Indian Express, Chief Wildlife Warden J S Chauhan said, “Before translocating cheetahs to Kuno-Palpur, discussions were held around their prey base. It was believed that these African cheetahs may not be able to kill a cheetal or a nilgai. But Asha, who is the smallest among the lot, managing to hunt down a nilgai calf is a very encouraging sign.”

He said that they will now work towards increasing nilgai and cheetal numbers to widen prey base for the cheetahs.

With the International Cheetah Day falling on December 4, forest officials at the Kuno are organising awareness drives among the villagers.

All the eight African cheetahs translocated from Namibia on September 17 were released into a larger enclosure on November 28. The release was done in a staggered manner starting with male brothers Freddie and Elton on November 5. Three female cheetahs — Savanah, Sasha and Sayyaya — were the last to be released on November 28, completing the first phase of acclimatisation period of cheetahs into their new habitat.

Savana, Sasha and Sayyaya are being closely monitored as since November 28 as they have not made a single big kill yet. They are surviving on small kills such as hare. At their quarantine bomas, all cheetahs were fed buffalo meat.

Forest officials pointed out that unlike the five other cheetahs, these three female cheetahs were born in the wild but raised in semi-wild conditions under constant care and protection of wildlife experts at Cheetah Conservation Fund (CCF) in Namibia.

“Such animals take a little longer to adjust and make kills in the new environment. We will have to wait and watch,” said a senior forest official, requesting anonymity.

The three female cheetahs have been kept in a 1.5-sq-km grassland enclosure having a good prey base. “It is true that these three female cats will have to learn to hunt but they are making constant efforts. We are hopeful that we will soon get to hear of their first hunt,” said Chauhan.

Meanwhile, with the Environment Minister signing a Memorandum of Understanding (MoU) in South African for another 12 cheetahs, the translocation is expected to take place as early as by mid-December.

Once these 12 cheetahs arrive, the eight at Kuno will have to be released into the wild to create space for the new guests once their month-long quarantine period ends.

“Considering that these 12 cheetahs have been quarantined in South Africa for long, it wouldn’t be wise to prolong their quarantine beyond what is necessary,” said another forest official.

Officials said Elton and Freddie were doing extremely well, while Oban, too, was showing encouraging results. The officials described Oban a “habitual hunter”.

However, Chauhan said, “These eight Namibian cheetahs will not be released into the free range until we are absolutely sure that they have become ace hunters.”