The report also states that most workplaces fail to provide adequate safety measures including masks and sanitisers, making a majority of workers vulnerable to coronavirus. 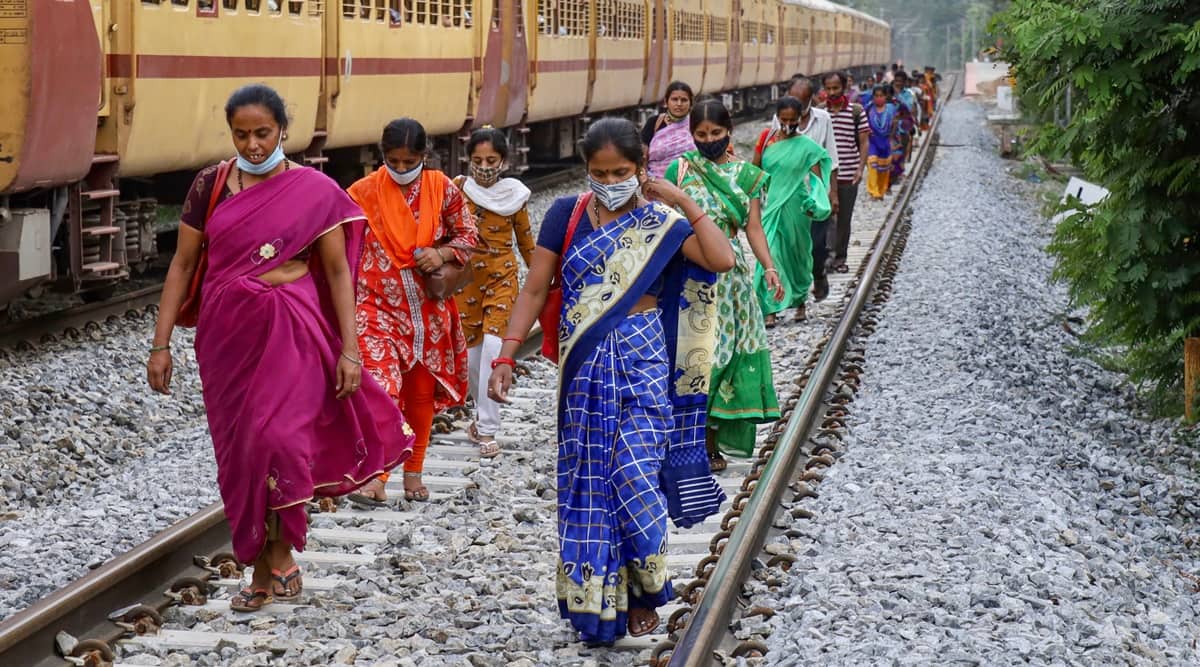 Workers return from their work as they walk on railway tracks during COVID-induced lockdown, in Bengaluru. (Representational Image/PTI)

Workers in Bengaluru, migrants and locals, are at risk of Covid-19 infection due to inadequate safety measures at work places, even as a majority of them don’t have access to testing and health care, according to a study by the All India Central Council of Trade Unions (AICCTU).

“The Government has failed to ensure adequate preventive steps and they have been left largely neglected. Most workplaces fail to provide adequate safety measures including masks and sanitisers. Since most workers don’t have access to regular testing or adequate access to health care in case of an infection, the majority of them are vulnerable to being infected by the coronavirus,” the report said.

The study further noted that 93.8 per cent of the respondents were impacted by the government’s decision to pause vaccination for the age group 18 to 44.

However, the study found, vaccine hesitancy was also high among the workers surveyed in the city as they were unsure of the safety and efficacy of the vaccines “due to inadequate steps for awareness taken by the government”.

Girija, a garment worker, also expressed concerns about people concealing the infection. “Last year people were more open about the infected people. This year they are not revealing anybody who is infected. It is all very secretive,” she told researchers who conducted the study.

Meanwhile, the migrant workers’ population in the city, who are unfamiliar with Kannada and other local languages, faced hurdles in accessing medical and health services.

Rajanna, a garment worker, was ferried in an ambulance arranged by the civic body and provided free hospital admission at a government healthcare centre. However, his family was asked to procure medicines from outside the hospital. They ended up paying Rs 15,000. He was eventually terminated from his job, which has further affected his family financially. “This shows that a large class of people had no access to healthcare while others were unable to afford the same,” the study noted.

With lockdown and strict restrictions in place to curb the spread of Covid-19, self-employed workers, particularly those working for online platforms such as Ola and Uber, waste-pickers, street vendors, and other unorganised workers such as construction workers, were affected more than those earning a monthly salary.

Shiva, a cab driver, said that the government, during the nationwide lockdown last year, had agreed to provide Rs 5,000 to drivers as compensation.

“Even though this happened based on unions’ pressure, only 4 out of every 10 people got this money. This could also barely help pay rent for a month,” he said.

He added that he knew many who killed themselves due to financial constraints.

However, 41 per cent of the respondents reported they continued to get the same monthly wages as before. These included sanitation workers, Anganwadi workers, library workers, garment workers, and healthcare workers. But many reported that their spouses were out of work and that their households were dependent on their wages (fully or partially).

Also Read |Bengaluru: Survey finds over 50% workforce in garment sector was asked to resign during lockdown

Narasamma, a sanitation worker, whose husband worked as a construction worker, said, “With two children at home, it is increasingly becoming harder to cope with a single earning member.”

Instances of reduced food intake and increased dependence on food grains from the public distribution system were also reported, while some spoke of the inadequacy of the quantum provided through the same. Among them was Manjula, a domestic worker who felt the amount of rice given in the ration had reduced.

“It is not sufficient for the entire month. The prices in the shops have increased due to which I had to take out a loan to buy rice. I have reduced buying vegetables, meat and milk to a very large extent,” she said.

The workers have voiced their demand for a Covid compensation package.

“The government must declare a COVID Compensation package for all BPL families, residents of slums (identified, declared or otherwise), contract and casual workers receiving wages below Rs 15,000, domestic workers, street vendors, construction workers, waste-pickers, manual scavengers, pourakarmikas, garment workers, plantation workers and other sections of the unorganised sector,” researchers noted after collating opinions from the respondents of the survey.

Other demands include setting up a helpline number operated by the Labour Department for grievance redressal, issuing necessary orders on delayed payment of rents, loan repayment moratoriums, loan waivers, waiver of electricity and water bills, and setting up community kitchens to ensure decentralization of food assistance among others.

The study was conducted in collaboration with the Garment and Textile Workers Union (GATWU) and Domestic Workers Rights Union (DWRU).