Unsung Heroes: From CEOs to doctors to lecturers, how Bengaluru traffic wardens help police to clear the traffic

Around 750 wardens, including 62 women, under Bangalore City Police Traffic Warden Organisation help the police regulate traffic movement out of their passion to contribute their bit for the betterment of the city. 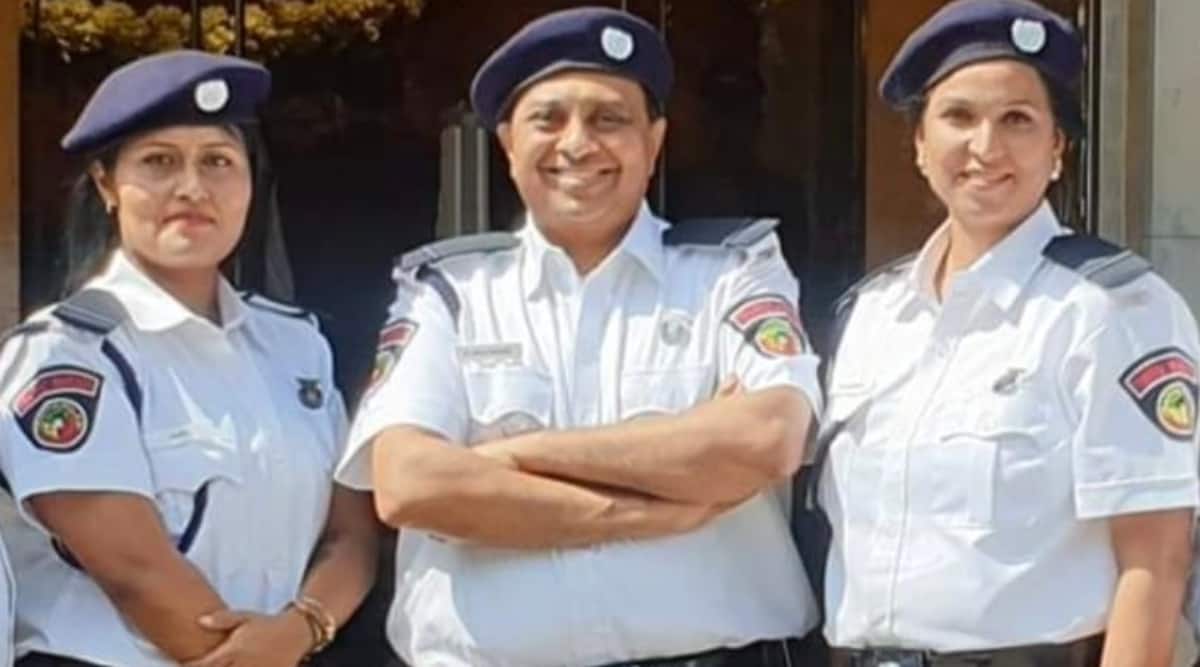 According to the rules laid down by the organisation, anyone between the age of 25-55 years are eligible to get enrolled as a volunteer. In photo: Dr C Vinod Hayagriv (middle), Managing Director & Director of C Krishniah Chetty Group. (Express photo)

As you wade through the traffic-choked roads of Bengaluru, there are chances you come across CEOs of companies, doctors or lecturers or retired bank employees in the shoes of traffic wardens regulating the motorists.

Out of their passion to contribute their bit to the betterment of the city, these volunteers with the Bangalore City Police Traffic Warden Organisation (BCPTWO) have been playing a pivotal role in handling Bengaluru traffic along with the city police at many crucial junctions of the city.

Besides handling day-to-day traffic, the wardens also volunteer to serve during events that can cause traffic congestions. (Express photo)

Besides handling day-to-day traffic, the wardens also volunteer to serve during events such as Indian Premier League (IPL) cricket matches and the aviation show ‘Aero India’, and during VVIP visits of the Prime Minister and the President, in coordination with the police.

“I wanted to join BCPTWO in 1985, the year it was launched. But then I was transferred to Hubballi. In 1992 when I returned to Bengaluru the first thing I did was join as a traffic warden. Every day after work in the bank, I do the job of a traffic warden. It has given me immense happiness,” says a proud Muralidhara C V who had retired from Karur Vysya Bank as a special officer. He has completed 30 years of service at BCPTWO and is presently the chief traffic warden.

The 62-year-old who now heads the organisation is also the person to have served it for the most number of years.

BCPTWO has three wings – Enforcement, Education, and Engineering. Muralidhara says that the wardens work in a holistic pattern. Other than handling traffic (enforcement), the wardens also go to schools and colleges to educate children. The engineering wing studies patterns of Bengaluru traffic and gives suggestions to the city police for improving the traffic system.

Pradhan Shroff, an industrialist who runs Presswell Products company in Bengaluru, can be usually seen on Bannerghatta Road in Hulimavu area during weekends and weekdays handling traffic. A successful businessman, Pradhan tucks his uniform after working hours and stands in junctions to decongest the roads. On weekends, he spends some hours controlling the heavy traffic flow towards Royal Meenakshi Mall.

“We all know about the Bengaluru city traffic problem. There are a lot of motorists on the road and we blame the police for jams. Can we expect some 5,000-6,000 traffic personnel to solve the problem? We need to support them and I am contributing in a small way, he adds.

Asked if any of his employees or people he knew were surprised to see him at traffic signals with a white shirt, he laughed and said that there have been many such instances. “Employees, suppliers, and many people who know me go for a jaw-dropping surprise to see me in a traffic warden’s uniform. But they say that they do get inspired by the work I do,” he smiles.

C Krishnaiah Chetty Group’s Managing Director C Vinod Hayagriv could be spotted in Commercial Street, Brigade Road and MG Road during evenings. “Originally, I wanted to be part of civic duties and in the 1990s when I came to know about the traffic wardens’ organisation, I wanted to be a part of it. But then, it was not as active as now. In 2019, I joined as a traffic warden and I am continuing my work after working hours.”

Srinivas Shenoy, CEO of Credo Infotech, has been serving the organisation since 2006. He is presently the deputy chief traffic warden and head of its administration. “I had always dreamt of serving the Armed Forces but it did not materialise. As I wanted to serve society in whatever capacity, I joined as a traffic warden. The problem of traffic is very much visible and the impact is also immediate. We do our bit to address the problem,’ he said.

Manju Mehra, 47, a homemaker, is one of the celebrated traffic wardens in the Whitefield area. Born in Pune, Mehra shifted to Bengaluru in 1998 and started working as a traffic warden in 2014. “I lived in Hulimavu and witnessed a couple of road accidents near Loyola school junction and that was when I decided I needed to contribute. Since then, I have been working in Varthur, Hulimavu and Whitefield areas.”

People living in Whitefield easily identify Mehra because of her dedicated work, especially during the Covid-induced lockdown period when she provided people with rations and arranged ambulances and hospital beds.

Mehra, who is married to a Punjabi, says she learned Kannada because of Bengaluru traffic jams. “I was born and raised in Pune, but today I can not only talk but also write in Kannada.”

Who can be a volunteer?

According to the rules laid down by the organisation, anyone between the age of 25-55 years are eligible to get enrolled as a volunteer. There will be exceptions in a few cases. “The minimum educational qualification is Class 12 but we don’t hire students and those who are unemployed. Anyone willing to join must have a source of income and be ready to work at least four hours a week or 20 hours in a month,” says Muralidhara.

Once a warden gets selected, they are given basic training and are deputed to the area of their choice. “Some prefer to work near their workplace and some near their residences. They will have to coordinate with the local traffic police and work along with them,” he adds.

But for a city like Bengaluru, which has a traffic of more than one crore vehicles, the strength of wardens is very low. “My aim is to have at least 5,000 wardens in the city and it can be increased gradually, Muralidhara says.