Unlike previous govts, we see speed as ambition, scale as strength, says Modi

During his visit to Karnataka, which will go to polls next year, the Prime Minister inaugurated Terminal 2 and a 108-ft tall statue of Kempegowda, the 16th-century founder of Bengaluru, at the Kempegowda International Airport in the city. 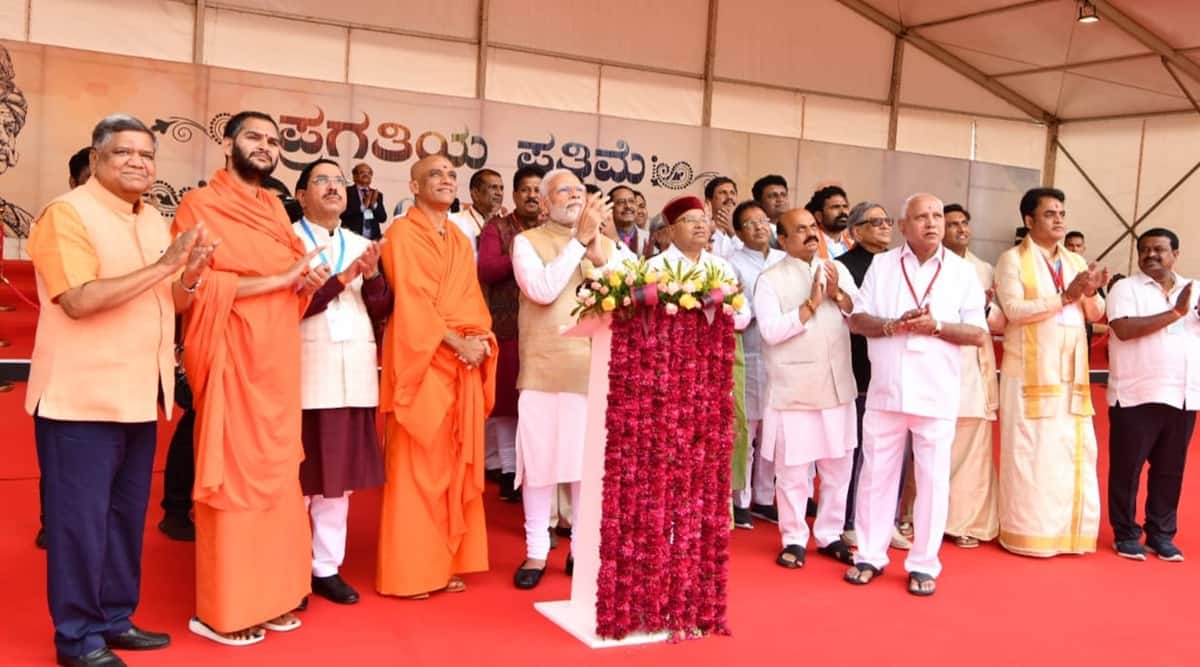 The Prime Minister also outlined the infrastructure and development initiatives unveiled by his Government, including the PM Gati Shakti national plan for multi-modal connectivity and the creation of rail, air and road infrastructure. (Express)

The governments that were in place before 2014 considered speed as a luxury and scale a risk, leading to slow development, but the BJP-led Centre sees speed as ambition and scale as the country’s strength, Prime Minister Narendra Modi said Friday after inaugurating a slew of projects in Bengaluru.

Referring to the surge in digital payments over the past eight years and the rollout of 5G services, Modi said: “In the India that existed before the year 2014, these things could not have been imagined. The reason is that the governments that existed earlier had an old way of thinking. The previous governments considered speed as a luxury and considered scale to be a risk… We have changed this thinking. We think speed is the ambition of India and scale is the strength of India.”

During his visit to Karnataka, which will go to polls next year, the Prime Minister inaugurated Terminal 2 and a 108-ft tall statue of Kempegowda, the 16th-century founder of Bengaluru, at the Kempegowda International Airport in the city.

He also unveiled a semi-high speed Vande Bharat train between Bengaluru and Chennai, and a train for pilgrims to Ayodhya, Kashi and Prayagraj.

Addressing a public gathering, Modi said, “Today, whether it is discussions on governance or the creation of physical and digital infrastructure, India is working at another level. Today the whole world is surprised by digital payment systems in India like the BHIM UPI. Could this have been imagined eight years ago?”

He said, “Made in India, 5G technology could not even have been imagined. In all these things, the youth of Bengaluru and the professionals in the city have played a big part.”

Prime Minister Modi at Bhuvanahalli (near Kempegowda International Airport) during this visit to Bengaluru on Friday. (Express Photo)

The Prime Minister also outlined the infrastructure and development initiatives unveiled by his Government, including the PM Gati Shakti national plan for multi-modal connectivity and the creation of rail, air and road infrastructure.

“Vande Bharat is not just a new train but an example of the future of India. Vande Bharat trains show that India’s days of halting progress are gone and that India wants to progress fast,” he said. In the next eight to 10 years, the Government plans to introduce over 400 Vande Bharat trains as well as Vistadome trains while creating freight corridors, he said.

Referring to Karnataka, Modi underlined that more than 30 lakh patients have benefited from the Ayushman Bharat scheme and around 55 lakh farmers have received Rs 11,000 crore from PM Kisan Samman Nidhi Yojana.

He also said that when the last three years were impacted by the pandemic, the state received investments worth Rs 4 lakh crore, and attracted the highest Foreign Direct Investment last year — from IT to biotechnology, aerospace, defence and EVs.

“As many as 400 companies from the Fortune 500 list are in Karnataka and the list is constantly increasing. This is happening because Karnataka is working with the strength of the double engine government,” he said.

Singling out Bengaluru, Modi said the city has played a huge role in India being known for its start-ups. “Start-up is not just a company, it is an emotion to do something new, to think differently. Start-up is a belief to resolve the challenges that are before the country. Bengaluru represents start-up spirit, which puts India in a separate league,” he said.

Paying tribute to Kempegowda, Modi said, “Centuries ago, (he) thought of commerce, culture, and convenience, and the benefits of his farsightedness are now available to the people of Karnataka,” he said, adding that the “petes” (markets) established at the time still form the commercial lifeline of Bengaluru.

Who are the Rajiv Gandhi assassination case convicts, freed by Supreme Court?