Meet Satvik Hegde, the Karnataka boy in the ‘most powerful selfie’ with Modi and Trump

Dressed in all white, Satvik, who was standing with children dressed in Indian attire welcoming the leaders, was seen approaching Trump and Modi with a phone in hand for a selfie. Satvik Hegde has shared the selfie on Instagram in which he signed up only after the event on Sunday. Twitter/WhiteHouse

Satvik Hegde, the boy in “the most powerful selfie” with PM Narendra Modi and US President Donald Trump clicked during the “Howdy, Modi” event in Houston, has become an overnight sensation on the internet. Hegde hails from Karnataka’s Sirsi in Uttara Kannada district.

A ninth-grade student in Louis D Brandeis High School at San Antonio, Satvik shot to fame after he approached the two leaders while they were interacting with some of the young performers at the event and requested them for a selfie.

Back in Sirsi, Satvik’s relatives are elated to see the youngster becoming “the talk of the nation.” According to his uncle Ganesh Hegde, Satvik’s parents migrated to San Antonio in 2002. His father, Prabhakar Hegde, is an IT professional while his mother Medha Hegde is a teacher in a private school.

“Satvik was picked to perform suryanamaskara during the event as he is a keen yoga performer. We could not identify him at first, even though we saw the same live on TV. Later, he sent us the selfie on WhatsApp and this surprised us,” Ganesh said. 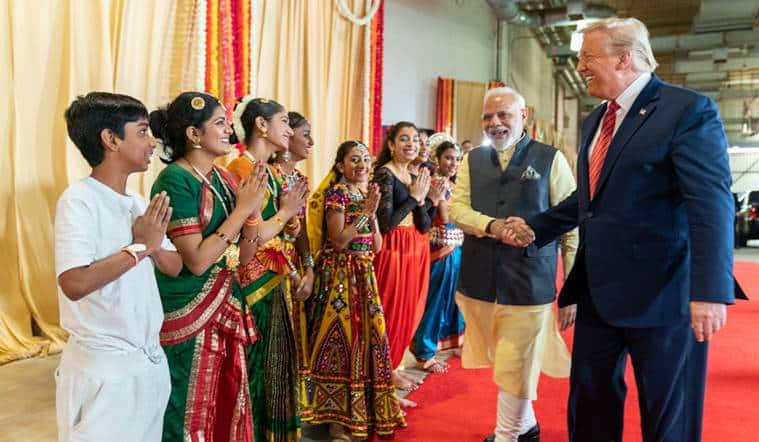 Satvik was seen with a phone in hand while approaching Trump and Modi. (Twitter/WhiteHouse)

Dressed in all white, Satvik, who was standing with children dressed in Indian attire welcoming the leaders, was seen approaching Trump and Modi with a phone in hand for a selfie.

A video, released by the Prime Minister’s Office (PMO), shows the girl standing next to him covering her mouth in surprise as Trump and Modi oblige for the selfie with Satvik. The clip generated several reactions on social media, with many calling him “lucky” and praising his confidence to step forward. The footage of the light-hearted moment has gone viral along with the photo clicked by Satvik on his phone.

Incidentally, the teenager also decided to share the photo on Instagram in which he signed up only after the event on Sunday. With almost 1,000 followers on the platform, Satvik on Monday clarified in an Instagram story, “This is my only real account (@satvikthesavage),” shot by himself while travelling in a car.

The 22-second video was shared by the official Twitter handle of Prime Minister’s Office (PMO), after which it went viral with over 5 lakh views.

“Memorable moments from #HowdyModi when PM @narendramodi and @POTUS interacted with a group of youngsters,” reads the caption of the clip.