Dubbing the politics of the BJP as one of himsa (violence) and asatya (falsehood), he said that the yatra “will spread the message of ahimsa and swaraj (non-violence and self-governance)”. 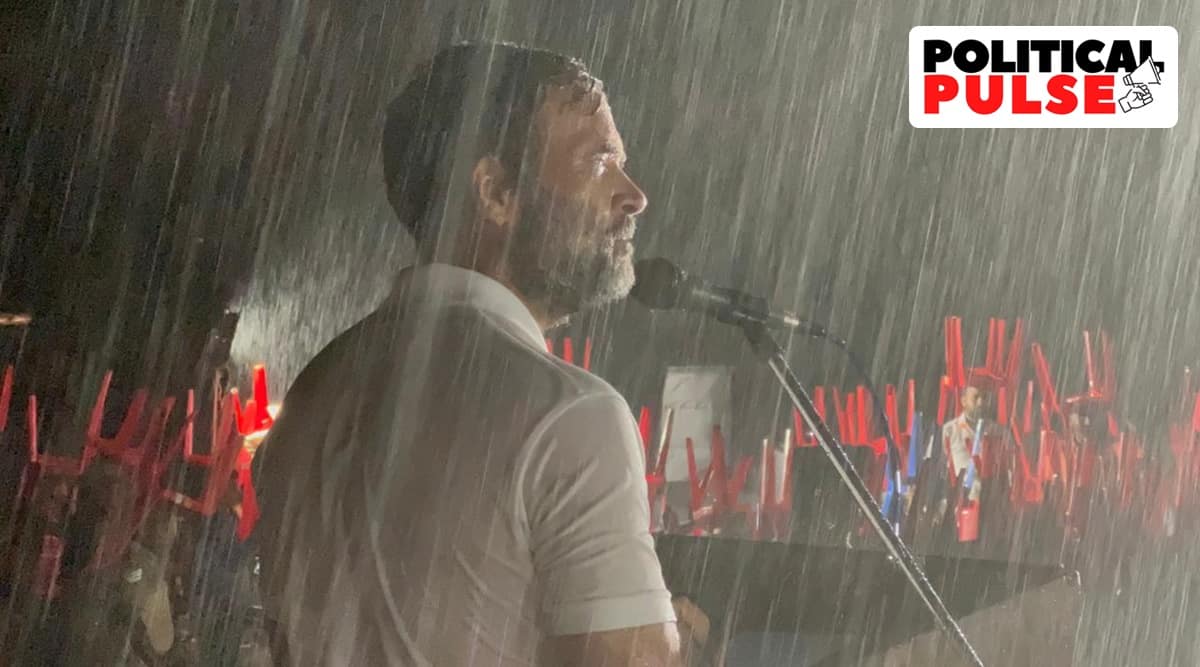 As heavy rains lashed Mysuru on Sunday, Congress leader Rahul Gandhi, who is currently in Karnataka as his Bharat Jodo Yatra crosses the state, came onto the stage to a rousing reception.

Braving the rain, he launched a scathing attack on the BJP-led state government, accusing it of corruption and saying that it took 40 per cent cut money for sanctioning work. “Neither has the Prime Minister taken any action against it, nor has the Chief Minister,” Rahul said.

As the rain poured, people could be seen holding chairs over their heads. “It’s raining and we haven’t stopped the yatra. Come heat, cyclone or cold, we are not going to stop,” the senior Congress leader said.

Following the event, he visited the Suttur mutt, a prominent mutt of the Lingayat community.

Earlier in the day, while participating at the Gandhi Jayanthi celebration at Badanavalu Khadi Gramodyoga Kendra in Mysuru district, he had said that the Bharat Jodo Yatra was a battle against the ideology that killed Mahatma Gandhi. He added that the hard-won freedom of the people of the country has eroded in the last eight years under the BJP’s rule.

“Just as Gandhiji fought the British Raj, we are today fighting a battle against the ideology that killed him. This ideology has in the past eight years delivered inequality, divisiveness and the erosion of our hard-won freedoms,” Rahul Gandhi said.

Dubbing the politics of the BJP as one of himsa (violence) and asatya (falsehood), he said that the yatra “will spread the message of ahimsa and swaraj (non-violence and self-governance)”.

“In the current context, swaraj is the freedom from fear and what our farmers, youth and small and medium enterprises desire. It is the freedom of our states to exercise their constitutional freedoms,” Rahul said.

The third day of the yatra in Karnataka began with a prayer meeting at the Badanavalu Khadi Kendra, which Mahatma Gandhi had visited twice, by four Dalit women. He also interacted with the women weavers at the Khadi center.