Bangalore news May 24 Highlights: Get the latest updates on Bangalore traffic, Bangalore weather, the events in Bangalore today and much more in our daily live blog

Bangalore Live News Today: Bangalore In what is seen as a welcome move, the Karnataka Road Development Corporation (KRDCL) has confirmed that the elevated corridor project in Bangalore will not be built on stormwater drains.

Meanwhile, Namma Metro officials have begun to warn commuters of slippery floors at metro stations in Bengaluru. Posters stuck at various stations read, “Passengers are requested to be cautious while walking in Metro station areas having a smooth surface.” Several complaints of slippery floors were raised to the BMRCL by passengers in the last few months.

"PC Mohan, MP from Bangalore Central, should urge people of Bengaluru to refrain from using cars at least one day per month. This will bring down the city's pollution levels," opines Shubha Sanjay Urs of the International Music and Arts Society.

"@PCMohanMP in #BangaloreCentral should urge people of Bengaluru to refrain from using cars at least one day per month to bring down the city's pollution levels, opines Shubha Sanjay Urs of the International Music and Arts Society. ⁦@IndianExpress⁩ | ⁦@decision2019⁩ pic.twitter.com/xHmJpeV5MP

"I hope Tejasvi Surya, as a young leader, will do his best for the people of #BangaloreSouth constituency, continuing Ananthkumar's legacy," Shivakumar, an auto driver, tells indianexpress.com

"I hope Tejasvi Surya, as a young leader, will do his best for the people of #BangaloreSouth constituency, continuing Ananthkumar's legacy," Shivakumar, an auto driver says. ⁦@decision2019⁩ | ⁦@IndianExpress⁩ | ⁦@IEBengaluru⁩ pic.twitter.com/gTl3T2bR7j

"Sad to see Krishna Byre Gowda's defeat in Bangalore North. We need development, let's wait and see how Sadananda Gowda and the Narendra Modi government would work for this," says Madhu R, a marketing professional.

Soon after BJP’s P.C. Mohan won from Bangalore Central parliament constituency, some groups have started campaigning on social media for him to be made the Union Railway minister.

The result of the Karnataka Common Entrance Test (KCET) 2019 will be declared on Saturday, May 25 at around 11 am by Karnataka Higher education minister GT Devegowda.

The coalition is strong in Karnataka-DCM

The coalition is strong in Karnataka and both the parties are keen to foil the efforts of the opposition to destabilise the government. The coalition reposes faith in the leadership of Kumaraswamy as Chief Minister, DCM Parameshwara said.

Deputy CM also said that a meeting of Congress ministers and legislators were held and they all have reposed faith in the present government and the leadership of CM Kumaraswamy. Informal cabinet meeting discussed the results of the parliament elections and the mandate that it has given. The decision was that the mandate given for the Lok Sabha polls was for the national elections and hence it has no impact whatsoever as for as the Karnataka government is concerned, says Deputy CM Parameshwar

No threat to the Karnataka government: Congress leader Siddaramaiah

Former Karnataka CM and Congress leader Siddaramaiah: There is no threat to the state government.

Former Karnataka CM and Congress leader Siddaramaiah: There is no threat to the government (state). #Karnataka pic.twitter.com/YXnPKuwSx0

Karnataka Congress Campaign Committee President, HK Patil writes to party president Rahul Gandhi, states, 'It is time for all of us to introspect. I feel it my moral duty to own up the responsibility, hence, I submit my resignation from the post.'

At 1 pm, mercury levels are at 32-degree Celsius in Bangalore. 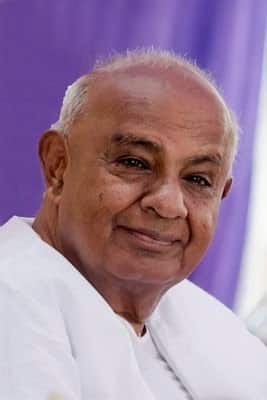 Newly-elected JDS MP Prajwal Revanna to give up Hassan seat to pave way for his grandfather HD Devegowda to contest.

My first task as MP elect was to pay pranams to my childhood hero Baba Saheb Ambedkar.

Born into nothing, he grew to become the most influential scholar - leader of the country. An inspiration for everyone.

As the Joint Director of Land Record (JDLR) 's joint survey on lakes in Bengaluru with BBMP, KSPCB and BWSSB officials progress, the team will inspect Abbigere lake on Saturday (May 25). Kaggadasapura lake's survey was done along with citizen activists after some of them raised a complaint to Lokayukta alleging encroachment and pollution of lakes in Bengaluru.

Joint Director of Land Record (JDLR) conducts a joint survey with BBMP, KSPCB and BWSSB officials at Kaggadasapura lake with citizen activists. @unitedbengaluru had raised a complaint to Lokayukta alleging encroachment and pollution of lakes in Bengaluru. https://t.co/srph9g5I4P pic.twitter.com/Tlb3CqhrGQ

Soon after BJP's P.C. Mohan won from Bangalore Central after the Lok Sabha polls were counted on Thursday, citizens started expressing on social media that they would love to see the MP as the union railway minister.  #PCMohanForRailwayMinister has garnered more than a thousand tweets already.

Explained: Why BJP’s victory may trigger the fall of Congress-JD(S) alliance in Karnataka

Read: Explained: Why BJP’s victory may trigger the fall of Congress-JD(S) alliance in Karnataka

At the same time, more than 450 marshals who take care of Bengaluru's popular Indira Canteens have not been paid for the last few months. According to the complainants, the response that they have sought from BBMP, the local civic body, is that the same is delayed due to the state government not releasing funds on time.

Meanwhile, BJP turned out to be the favourites in Bengaluru for the 2019 Lok Sabha elections. BJP’s youngest candidate in this election campaign nationally, 28-year-old Tejasvi Surya recorded a comfortable win over Congress’ Rajya Sabha MP B.K. Hariprasad. The young lawyer won by a margin of over 3.2 lakh votes in Bangalore South.

Bangalore Central‘s BJP MP PC Mohan won against Congress candidate Rizwan Arshad after a tough contest. The latter was leading for sometime after which Mohan took over to secure his hat-trick win from the constituency by over 70,000 votes. Prakash Raj emerged third to face a humiliating defeat.

At the same time, Union minister and former Karnataka CM Sadananda Gowda defeated Karnataka RDPR minister Krishna Byre Gowda in Bangalore North. The winning margin for the BJP MP is 1,47,518 votes this time; lesser by over 80,000 votes from 2014.