🔴 All international travellers from South Africa, Botswana, and Hong Kong who have arrived in the last 15 days (since November 12) should be tracked and subjected to repeat RT-PCR testing, says a circular. 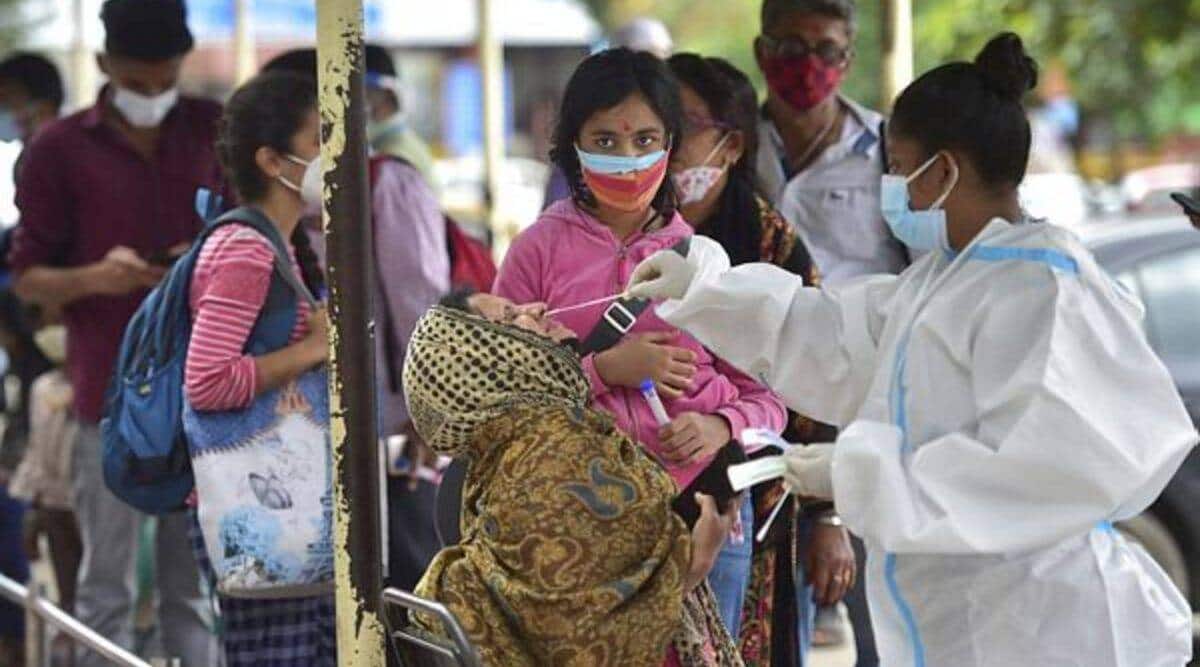 As per the revised targets, a daily increase of 5,000 tests will be in effect in the Bengaluru municipal area (BBMP), while a total of 15,0000 tests have been increased from across other districts. (PTI)

With the new coronavirus variant named Omicron (B.1.1529) being reported from several countries and new clusters of Covid-19 infection reported from different districts in the last few days, the Karnataka government has decided to intensify surveillance measures.

As per recommendations made by the Covid-19 technical advisory committee (TAC) to the state government, the health and family welfare department has instructed officials to track and conduct “repeat RT-PCR testing” for those arriving from high-risk countries where cases with the Omnicron variant were discovered.

“All international travellers from South Africa, Botswana, and Hong Kong who have arrived in the last 15 days (since November 12) should be tracked and subjected to repeat RT-PCR testing,” the addendum circular issued by principal secretary (health & family Welfare) T K Anil Kumar read.

Further, it has been decided to place such travellers who have tested positive for the infection under “institutional isolation” for ten days apart from their samples mandatorily sent for whole genome sequencing (WGS) “on a fast-track basis.”

A couple of days since new Covid-19 clusters were identified at a private medical college in Dharwad and a couple of residential schools in Bengaluru, the TAC recommended implementation of enhanced containment measures, instructing officials to ensure “strict compliance” with them.

While it has been made mandatory that samples of those testing positive in these clusters should be sent for WGS on priority, it was directed that separate nodal officers should be appointed for overall general supervision and coordination of containment measures at The International School in Bengaluru’s Dommasandra, and SDM College of Medical Sciences and Hospital (SDMSH) in Dharwad.

#Karnataka revises daily #Covid19 testing target to 80,000 from 60,000, acting upon recommendations made by the Technical Advisory Committee. Targets ⬆️ by 5,000 in #BBMP (#Bengaluru) area, 15,000 in other districts put together. @IndianExpress pic.twitter.com/kpH5g0dhyK

“With SDMSH being a health care institution, we have recommended that the nodal officer should be appointed from the Department of Internal Medicine or Respiratory Medicine to oversee all standard treatment and public health protocols are adhered to, at all times round the clock,” a senior TAC member told The Indian Express.

Further, in a bid to “strengthen Covid-19 surveillance” across the state, the TAC has recommended a rise in daily testing numbers by 20,000. The target is now set at 80,000, increased from 60,000 earlier.

A detailed circular which was issued shortly thereafter mentioned the selected groups as: Students and teachers in colleges, high schools; hotel and restaurant staff; shopkeepers in malls, markets; catering staff and doorstep-delivery personnel; factory workers; officer goers; service staff in pubs, bars; attendants in cinema halls, multiplexes; and others “in crowds by vocation”.

Meanwhile, district administrations have been asked to ensure that up to 50 per cent of such samples should be from the district headquarters and the rest are from rural areas “ensuring that 10 per cent of the total samples are taken from children.”

As per the revised targets, a daily increase of 5,000 tests will be in effect in the Bengaluru municipal area (BBMP), while a total of 15,0000 tests have been increased from across other districts.

Meanwhile, 322 new cases were reported in the state on Saturday with a test positivity rate (TPR) of 0.34 per cent.