Wildlife conservationist Joseph Hoover said, “To lament about snakes and leopards slithering and prowling around their properties is unjustifiable.” 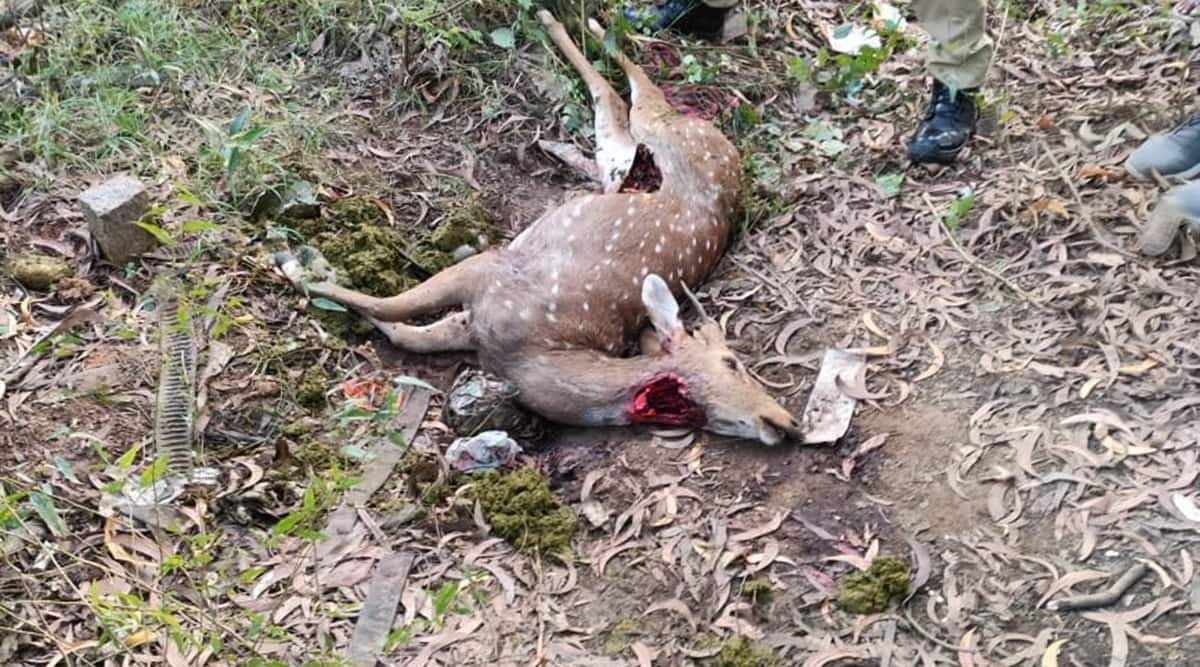 The carcass of a deer was spotted at Kodipalya near Kengeri. (Express Photo)

In the last one month, there have been several instances of leopard sightings in Bengaluru. While the forest department has launched combing operations to capture the big cats, till Tuesday evening, there was no major breakthrough.

On December 1, the carcass of a spotted deer, suspected to be killed by a leopard, was found at Kodipalya near Kengeri in Bengaluru South. On November 19, a leopard killed a calf near the Turahalli State Forest area.

A forest official said, “As of now, we have not sighted any leopard. We have set up a 20-member team and the combing operations are on. We have informed the local residents not to venture out near the forest early in the morning or late in the night. There has been no incident of leopard mauling a human in Bengaluru so far.”

Wildlife conservationist Joseph Hoover said, “There was a clamour about the sighting of a leopard in the vicinity of the Turahalli forest. Anxious people have been demanding that the leopard be captured to keep themselves and their children safe. All that the leopard has done is kill a calf and a spotted deer, its natural prey, near the Turahalli reserve forest.”

He added, “Those who built or bought and developed properties in Banashankari Sixth Stage and some parts of Rajarajeshwari Nagar were pretty much aware of the existence of three fragmented pockets of the Turahalli forest. Now, to lament about snakes and leopards slithering and prowling around their properties is unjustifiable.”

He said that since human-animal conflicts are frequent happenings, the government should immediately “stop decimating forest landscapes and do everything it can to re-establish animal corridors”.

Hoover added, “Consequently, man-animal conflicts, as in the current case, are bound to escalate. Our zoological parks are overcrowded with leopards. Zoo authorities refuse to even accept abandoned leopard cubs. The cubs are often mercilessly left orphaned in a forest, where they eventually die of hunger or are killed/devoured by other predators and raptors. Forget leopards, there is no space for even captured tigers in Koorgalli and Bannerghatta rehabilitation centres. The government has done precious little to address the issue, with young transient and old, injured tigers preying on cattle in villages on the periphery of Bandipur and Nagarhole tiger reserves.”

France record a reward for my patience, says Olivier Giroud