Insights on these diverse species of plants make one realise the voluminous spread of biodiversity around the Karnataka capital. 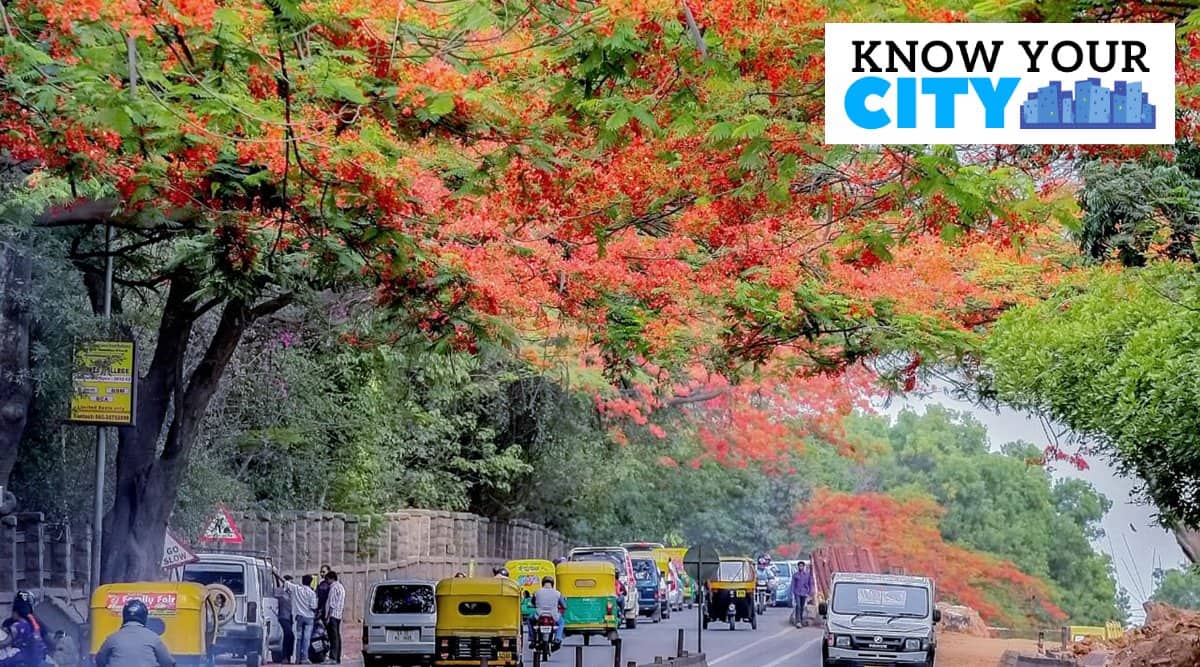 A native of Madagascar, Gulmohar is one of the popularly cultivated avenue trees in Bengaluru. (Express file photo by Jithendra M)

While critics can continue arguing about the diminishing green cover of Bengaluru, naturists and conservationists still believe that the city is home to thousands of species of plants that offer a lifeline to human beings, birds and other species.

According to the horticulture department, Bengaluru is home to close to about 5,000 species of plants. Interestingly, most of these species are found in residential areas, main roads, avenues that many of us tend to miss. However, insights on these diverse species of plants including flowering trees and shrubs actually make one realise the voluminous spread of biodiversity around Bengaluru, which is actually hard to miss. 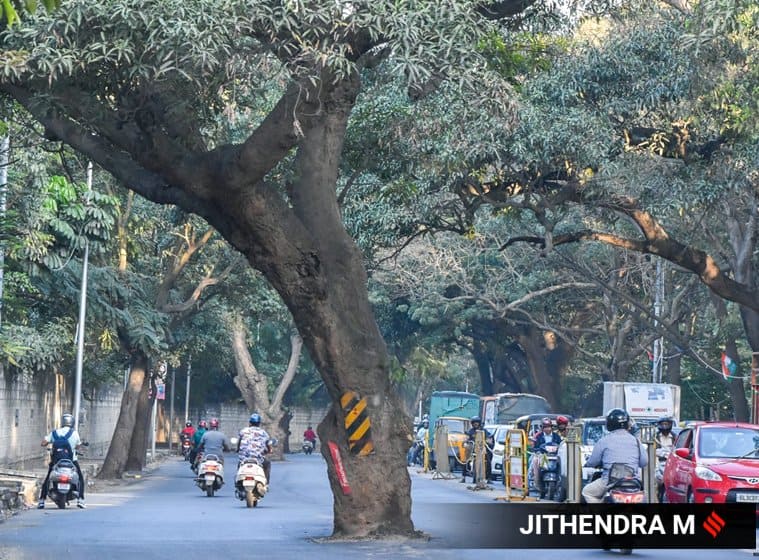 M B Krishna, a Bengaluru-based ecologist and ornithologist, wrote, “Widening the road by removing the trees would just not help move vehicular traffic any better.” (Express photo by Jithendra M)

M R Chandrashekar, deputy director of the horticulture department in the Bruhat Bengaluru Mahanagara Palike, explains that rain trees, which are among the oldest trees planted in Bengaluru, still dominate many parts of the city. They are spread across areas such as Banashankari, Palace Road, (near Maharani’s College), Magadi Road and Jayanagar. However, many rain trees had to face the axe to pave the way for the construction of the metro in some areas, said Chandrashekar. According to a research paper titled “Trees Of Bengaluru”, published by the Indian Institute of Science, Bengaluru, the rain tree has an impressive umbrella-like canopy and it can be quite fascinating to watch the tree do its daily exercise of opening and closing its leaves. The flowers are white and pink resembling an open brush contrasting against the green crown. An ideal species to be planted along broad roads, it also provides for roosting and nesting of many birds.

S Karthikeyan, a naturalist who has documented some of the important species of trees in Bengaluru, says that Karnataka capital has many avenue trees including the common bur flower, locally known as kadamba. This tree has been planted in some parts of Bengaluru and is native to India but is also found in China, Australia, Indonesia and Singapore, among other countries. The flowering season is usually between October and July. The tree has large leaves arranged loosely and grows large with spreading branches. It is ideally suited for large parks, gardens and campuses.

Spread across Jayanagar 4th Block and Cubbon Park, mahogany has its origins in West Indies. The flowers of this tree are very tiny and hardly noticeable when on the tree. But one can see these pale- greenish flowers scattered on the ground under the tree. However, the strong yet pleasant fragrance in the vicinity of the tree in flower gives it away. It is quite an experience to be beneath a mahogany in flower on a summer morning or in the evening. At this time, the tree also sports fresh leaves which are shed very briefly during December through January.

This native tree has a wide distribution. It is nearly evergreen and hardy. Pongam is a medium-sized tree widely grown for its many advantages. It can be grown easily, is not very slow-growing and has a dense canopy. Apart from the many other uses of the tree, it has been planted in the past for shade along roadsides. They can be found in Malleshwaram, Mahalakshmipuram, Basaveshwara Nagar and Yelahanka. It is drought-resistant and has high tolerance for air pollution.

A native of Madagascar, Gulmohar is one of the popularly cultivated avenue trees in Bengaluru. Found in Rajajeshwari Nagar, Malleshwaram, Rajaji Nagar, Shankar Mutt, Seshadripuram and Yelahanka, these are moderate-sized trees, growing up to 9m high. The tree starts flowering between April and June. The flat, footlong pods of this tree are very characteristic and persist. The tree has conspicuous buttresses that at times spread extensively. The Small Green Barbets often find this tree ideal for nesting. These trees add colour to the city when they start blooming.

A deciduous tree measuring up to 10 m high, Jacaranda is an elegant tree, and spectacular one when in flower. It attains a large size and has a canopy consisting of fine, feathery leaves because of which it has a great ornamental value. The leaves are lost during winter and bunches of flowers grow when the tree is leafless. The flowers are mauve-coloured and tubular. The seeds are enclosed in a round, woody capsule. They hang from the tree for a long time before dropping off. A native of South America, the jacaranda tree can be found in Jeevanbhima Nagar, Malleshwaram and Rajajinagar.

This evergreen tree is largely cultivated for its fragrant flowers, which are often used in religious ceremonies. Sampige Road in Malleswaram, also home to many famous temples, is named after the tree. Frequently planted in the vicinity of temples, it is considered sacred. The tree requires a moderate amount of sunlight and does well in moist climate. It has reasonably dense foliage and can grow very large.

Chandrashekar said the horticulture department had also planted Ficus Blackiana, designed in an ornamental style, along several medians (near the Mekhri Circle underpass) and along the footpaths of TenderSure roads (Church Street) in Bengaluru. “In fact, it is also believed that one of the oldest trees in Bengaluru is the Tipu mango tree located in Lalbagh. It is about 250 years old, having existed since the British era. However, there are much older trees like Nilgiris that dates back more than 300 years,” he said.

M B Krishna, a Bengaluru-based ecologist and ornithologist, wrote in his blog titled “Saving the roadside trees”, “Look at the trees, or at least what is remaining of them. They are all in a pretty troubled state. We cut them down saying roads need to be widened. Look at where the traffic piles up and any one can see it is at the junctions. Widening the road by removing the trees would just not help move vehicular traffic any better. Hence it is important to strengthen trees by root applications of fertilisers that revive them very effectively. An active, yes, proactive, tree health maintenance effort by competent plant pathologists and pest control experts is a must. Amputation is certainly not the way out. We after all require cures and not surgery.”

Row over Paresh Rawal remarks | Ahmedabad’s Bengali migrants have a bigger problem: The Disturbed Areas Act that ties them down