The good samaritans were handed over an appreciation letter in a special meeting which took place in Shantinagar on Thursday prior to the commencement of their next trip to Munnar. 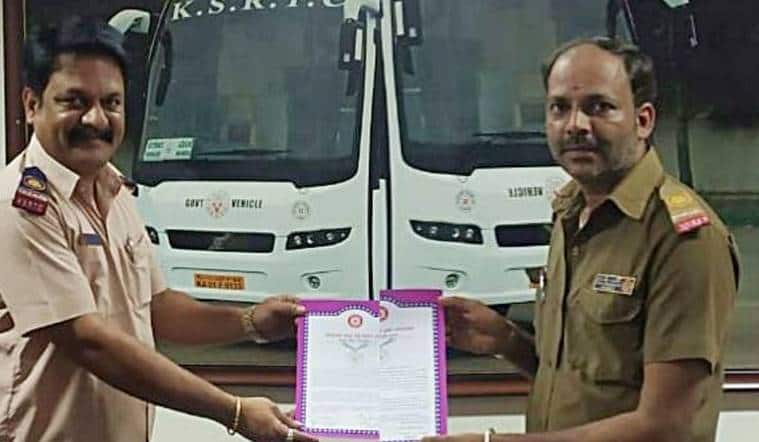 The bus conductor KA Shekharegowda (right) and Pavanakumar TS (left) who were lauded for their humanitarian service. Express Photo

A driver-conductor duo from the Karnataka State Road Transport Corporation (KSRTC) is being lauded after their timely intervention helped a mentally disturbed woman reach her parents safely. They were handed over an appreciation letter in a special meeting that took place in Shantinagar on Thursday.

The incident took place on late Monday night near Chinnar wildlife sanctuary in Kerala’s Idukki district when the KSRTC staff, on their way to Bengaluru from Munnar, saw a stranger with a woman requesting the bus to make a halt.

“Our staff decided to stop the bus as the person ( a tea stall owner) looked tense and the woman with him looked uneasy. On speaking with the man, we realised that he found the woman wandering alone in the forest area. The stall owner requested our staff to take her with them to drop her at a city area, suggesting it was not safe to leave her alone in the forest during the late hours,” Nagaraj G, manager of KSRTC Central Depot-1 told indianexpress.com.

According to KSRTC officials, the woman, aged 25, had been away from home for almost a week. “She was found near the forest check-post and our driver Pavankumar TS and conductor KA Shekharegowda made minor enquiries with the tea stall owner before she was let in the bus,” Nagaraj added. This appreciation letter signed by the KSRTC MD which was handed over to KA Shekharegowda, the conductor of the bus lauding his humanitarian gesture.

In the bus, the duo found out that she speaks Kannada when they started asking her more about her whereabouts. “The lady then gave us a couple of phone numbers orally to which we dialled and found it was her dad’s number. We asked him to come and meet us in Bengaluru. However, we informed Wilson Garden police asking their legal intervention in the matter,” the conductor said.

The woman’s father came down to Bengaluru the next day and met the police officers at the station. He subsequently took her with him after legal procedures and cross-verification, KSRTC Bengaluru Divisional Controller BT Prabhakar Reddy said. 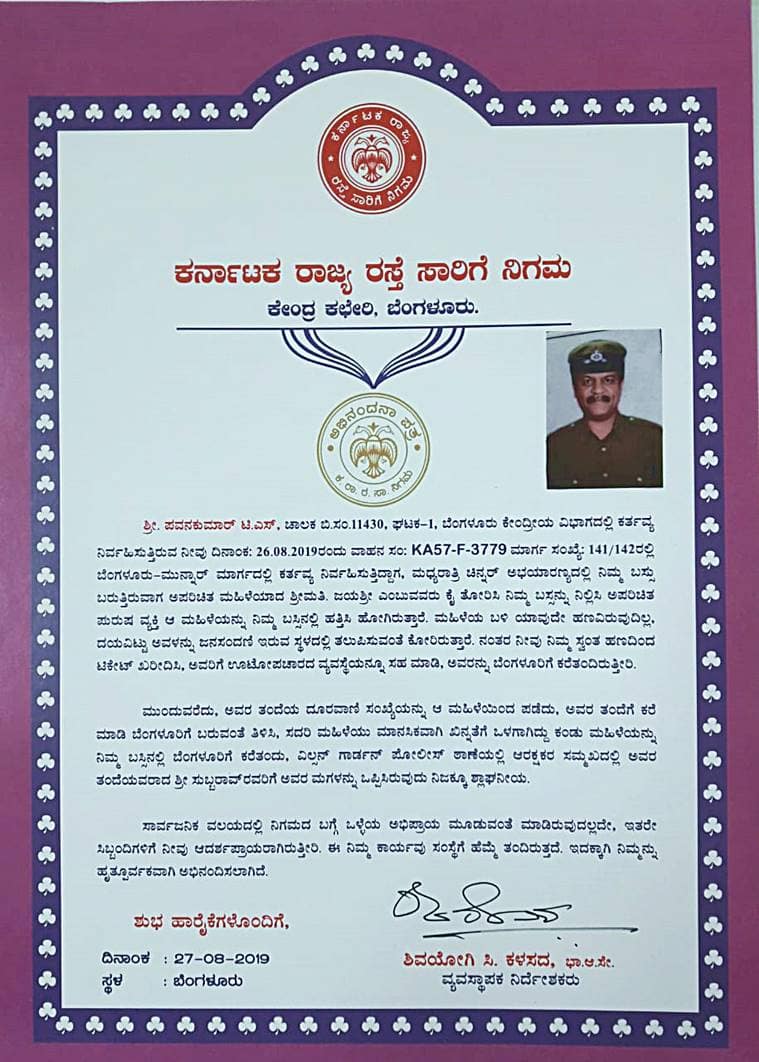 The KSRTC MD’s special appreciation letter which was handed over to Pawankumar TS, the driver of the bus.

The duo, who has completed over 15 years of services in KSRTC, was lauded by KSRTC MD Shivayogi C Kalasad for their “timely and humanitarian service helping the woman safely reach her parents,” the KSRTC said in a statement released on Wednesday. 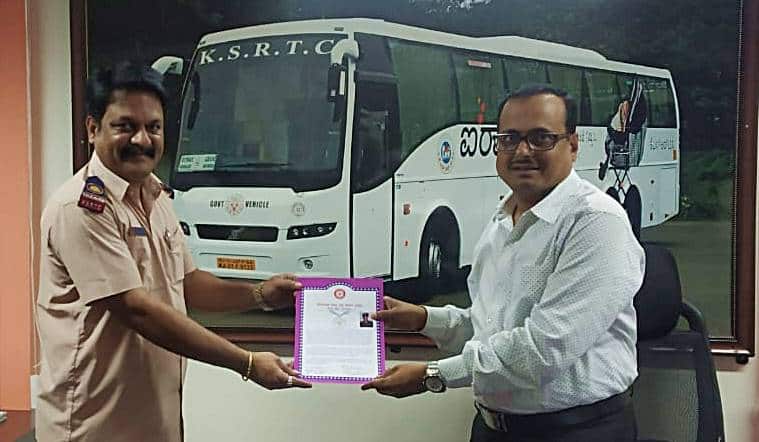 In a similar incident, Nagaraj S, a conductor working in Anekkal Division was honoured last week for finding and returning a bag with Rs 3 lakh cash and mobile phone back to its owner from the bus he was working in.