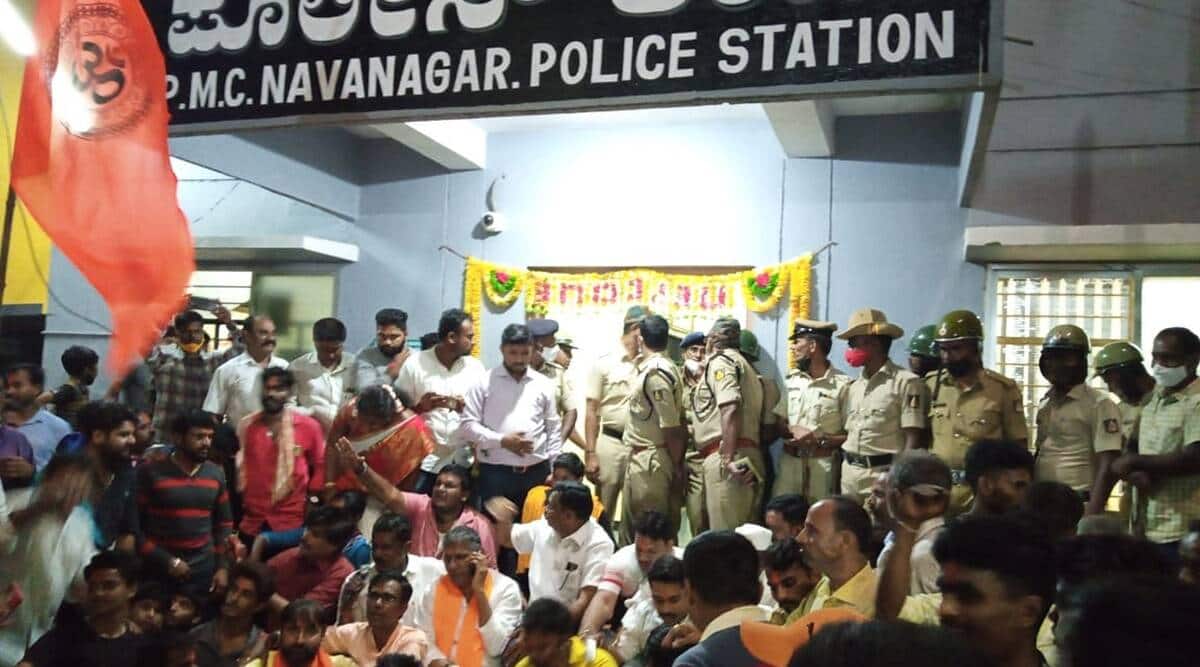 Days after Bajrang Dal and members of other outfits blocked roads in Karnataka’s Hubballi demanding arrest of a pastor alleging conversion of Hindus, an IPS officer filed a case against the members for abusing him and other police officers and trying to disrupt communal harmony.

Deputy Commissioner of Police (DCP) (law and order) of Hubballi-Dharwad commissionerate K Ramarajan filed a complaint Tuesday and a case has been booked under IPC Sections 504,143,147,153,295(a) and 353. APMC Navanagar police have named Ashok Venkatesh Anvekar and 100 unknown persons as accused. BJP MLA Arvind Bellad was also a part of the protest.

On Sunday, Vishwanath Budur, who belongs to Bhovi, an SC community, lodged a complaint stating a pastor named Somu Avaradhi allegedly lured him to convert to Christianity for over three months and on Sunday, around 10:30 am, he abused him for sporting a vermilion mark on his forehead. Avaradhi, a resident of Hubballi, was later arrested.

Following Budur’s complaint, the members of Bajarang Dal and Vishwa Hindu Parishad and other outfits blocked the Hubballi-Dharwad Main Road, including a dedicated corridor bus transit system at Bairidevarkoppa. They also staged a protest in front of the police station.

Subscriber Only Stories
View All
ExplainSpeaking: How to evaluate a Union Budget
Mahesh Vyas writes: Why the job shortage is for real
Delhi confidential: Focus On Projects
Gandhi to Tagore: At old St Stephen’s campus, a glimpse into remnants of ...
Apply New Year promo code SD25
Bangalore News
More from Bangalore

According to the complaint, the protestors used foul language against the IPS officers and other police staff and alleged they were supporting conversion of Hindus and threatened of dire consequences.

Restore statehood, democratically-elected govt in J&K as Centre has ‘utterly failed’ there: Cong