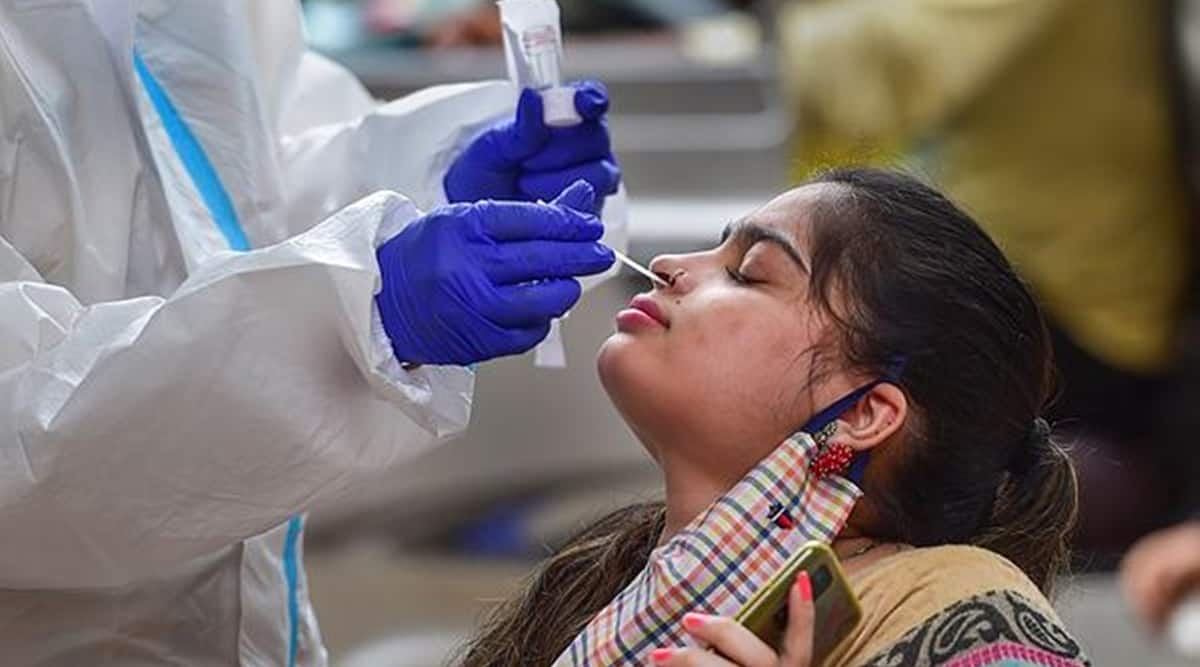 A health worker collects swab sample of a woman in Bengaluru on Monday. (PTI photo)

The state has 1,72,141 active cases whereas the total discharges stood at 25,66,774 with the recovery of 15,409 more people, the health department stated. The positivity rate for the day was 4.56 per cent and the case fatality rate was 1.75 per cent, the department said.

On June 1, Bengaluru had recorded 276 fatalities.

Mysuru district remained the second major Covid hotspot with 670 new cases on Monday. With 25 deaths, it also reported the most number of deaths in the state.

New Covid-19 cases were reported in other districts as well including Bengaluru Rural, Chamarajanagar, Dharwad, Kodagu, Kolar, Udupi and Vijayapura. The department said there were 10 deaths each in Davangere and Dharwad, six each in Shivamogga, Ballari and Dakshina Kannada, five each in Belagavi and Haveri.

Fatalities were reported in 17 other districts also while there were zero deaths due to Covid in Bidar, Chamarajanagar, Gadag and Ramanagara.

As Bengaluru gears up for the unlock process, BBMP Chief Commissioner Gaurav Gupta cautioned citizens on Monday that they need to be vigilant in the coming months. He said that the ability of the public to stay focussed and disciplined will determine the success of the fight against the pandemic.

He was speaking at a virtual meeting on increasing Covid testing.

Also Read |Delta plus: New Covid variant identified, experts say no cause of concern for now

Gupta said that BBMP is intensifying Covid testing and step up containment and isolation measures. “The fight against Covid-19 is a long one and everyone must embrace a safe lifestyle and get vaccinated,” he said.

With lockdown restrictions in the city, many activities are being allowed now. With daily wage labourers returning to the city, tests should be conducted in railway stations, bus stands, check posts and toll booths on the outskirts, he said. Tests should also be carried out in hostels, paying guest accommodations, factories and construction sites, he further said, adding that RWAs must be instructed to conduct tests on those coming from outside.

Over 40 lakh vaccinated in Bengaluru so far: BBMP

According to the BBMP chief commissioner, so far 40,39,744 people have been vaccinated in Bengaluru.

“People above 44 must be contacted through the helpline number (1912) and informed to get the second dose of vaccine. A door-to-door survey should be conducted and people should be encouraged to get vaccinated,” he said.

Gupta also asked the chief health officer to make preparations to tackle the third wave of the pandemic and submit a proposal regarding the infrastructural upgrades required at the primary health centres and maternity hospitals.

More research should be undertaken in the field of Ayurveda to prevent outbreak of diseases, said Health and Medical Education Minister Dr. K Sudhakar.

Speaking on the occasion of the valedictory ceremony of silver jubilee celebrations of Rajiv Gandhi University of Health Sciences (RGUHS) on Monday, Sudhakar said, “Every medical college should focus more on research work. Researchers from Oxford University developed a Covid vaccine. Similarly, RGUHS should encourage research to help fight diseases.”