Bengaluru News Today, Karnataka News Highlights: An open-ended warrant was also issued by the court against Nithyananda earlier, but the police were unable to secure him or find his whereabouts.

Nithyananda has failed to respond to all the summons issued against him since 2019. (File Photo)

Bengaluru, Karnataka Today: A Sessions Court in Ramanagara, adjoining Bengaluru, on Thursday issued a non-bailable warrant (NBW) against controversial godman Nithyananda. The III Additional District and Sessions Court issued the NBW in a case of rape in 2010.

The management of Bengaluru’s Mount Carmel College (MCC) was booked for holding a large-scale Independence Day celebration without police permission and causing traffic gridlock in the central business district on Monday.

Protests against Siddaramaiah: CM Bommai assures him of security

Following incidents of eggs being hurled at Congress leader Siddaramaiah's car and black flags waved at him during his visit to Kodagu, Karnataka Chief Minister Basavaraj Bommai on Friday said he has personally spoken to the Leader of Opposition in the State and assured him of adequate security and a thorough probe.(PTI)

The III Additional District and Sessions Court issued the NBW in a case of rape in 2010. Read more here

BJP leaders continued to target Congress leader Siddaramaiah for his "Muslim area" remark and comments against V D Savarkar with Karnataka Energy Minister V Sunil Kumar on Friday urging the former chief minister to visit the cellular jail in Andaman and get to know the story of the Hindutva ideologue's contribution to the freedom struggle.(PTI)

The management of Bengaluru’s Mount Carmel College (MCC) was booked for holding a large-scale Independence Day celebration without police permission and causing traffic gridlock in the central business district on Monday.

According to the High Grounds police, around 6,000-8,000 people entered the campus when only 2,000 people had the permission to do so. Police also accused the college of selling tickets to its silver jubilee event despite having sought permission only for the Independence Day celebration. Read more...

The Karnataka High Court has issued notices to the state’s top forest and revenue officials on a contempt petition filed over the failure to renotify reserve forest areas in Shivamogga district despite court orders issued in March 2021. Know more...

6 men held for 83-year-old’s murder, some with links to multiple robberies in city

An 83-year-old woman who lived alone in HSR Layout in south-east Bengaluru was robbed and murdered by a gang that included members involved in multiple robberies in the city, the Bengaluru police revealed on Friday, following the arrest of six persons of Nepali origin for the August 12 robbery and murder.

A few days before committing the crime, two members of the gang approached the victim with an offer to read more here

Ashoka Trust for Research in Ecology and the Environment (ATREE) is currently celebrating its 25th year of interdisciplinary research focused on carrying out policy-oriented research, outreach, and education in the field of environmental conservation and sustainable development. Noted philanthropist Rohini Nilekani announced the Rs 25 crore endowment during a two-day event on August 18 and 19 at the JN Tata Auditorium.

The Indian Institute of Science (IISc), Bengaluru, and US company CELLINK, a 3D bioprinter developer, on Friday announced a partnership to set up a centre of excellence (CoE) for 3D bioprinting.

Housed at the Centre for BioSystems Science and Engineering (BSSE) at IISc, the centre will provide access to 3D bioprinting systems, and focus on advancing research on heart, bone, cartilage and cancer through the use of 3D bioprinting. Know more...

Covid hospitalisations in Karnataka go up as cases increase

With a surge in Covid cases in Karnataka, the graph of hospitalisations is also going up. While there were 107 cases of hospitalisation on June 30, a month later there were 138 admissions on July 31. The data from the Department of Health and Family Welfare show that in August the admission rate went up rapidly.

6 arrested for murder of lone elderly woman in HSR Layout

Bengaluru police arrested six members of a gang involved in several burglaries in the city for the murder of an 83-year-old woman.

The incident occured when the woman was alone at her home in HSR Layout on August 12.

The gang approached the elderly lady in the guise of providing security for her three-storey home. Some of the gang members were attempting to flee to Nepal, police sources said.

Devas-Antrix deal: US court allows seizure of $87,457 funds from US satellite firm

A US court has allowed foreign investors in the start-up firm Devas Multimedia Pvt Ltd to seize $87,457 from the bankrupt US satellite firm Intelsat as part of efforts to recover a compensation of over $1.2 billion from Antrix Corp., the commercial arm of the Indian Space Research Organisation (ISRO), for the cancellation of a 2005 satellite deal. Three Mauritius-based investors in Devas Multimedia have been attempting to seize funds at Intelsat – which has outstanding dues payable to Antrix Corp – through proceedings in a US federal court for the Eastern District of Virginia. (Read more)

CELLINK to establish centre for bioprinting in Bengaluru

Bioprinter company CELLINK and the Indian Institute of Science (IISc) are partnering to establish a Centre of Excellence for 3D bioprinting in Bengaluru. The centre will focus on advancing research on heart, bone, cartilage and cancer through the use of 3D bioprinting, with an MoU being signed on August 18. The centre will be housed in the Centre for BioSystems Science and Engineering (BSSE) at IISc, and will provide access to 3D bioprinting systems, enabling researchers to accelerate their work across critical applications, with the ultimate goal of improving health outcomes, said the company in a statement. 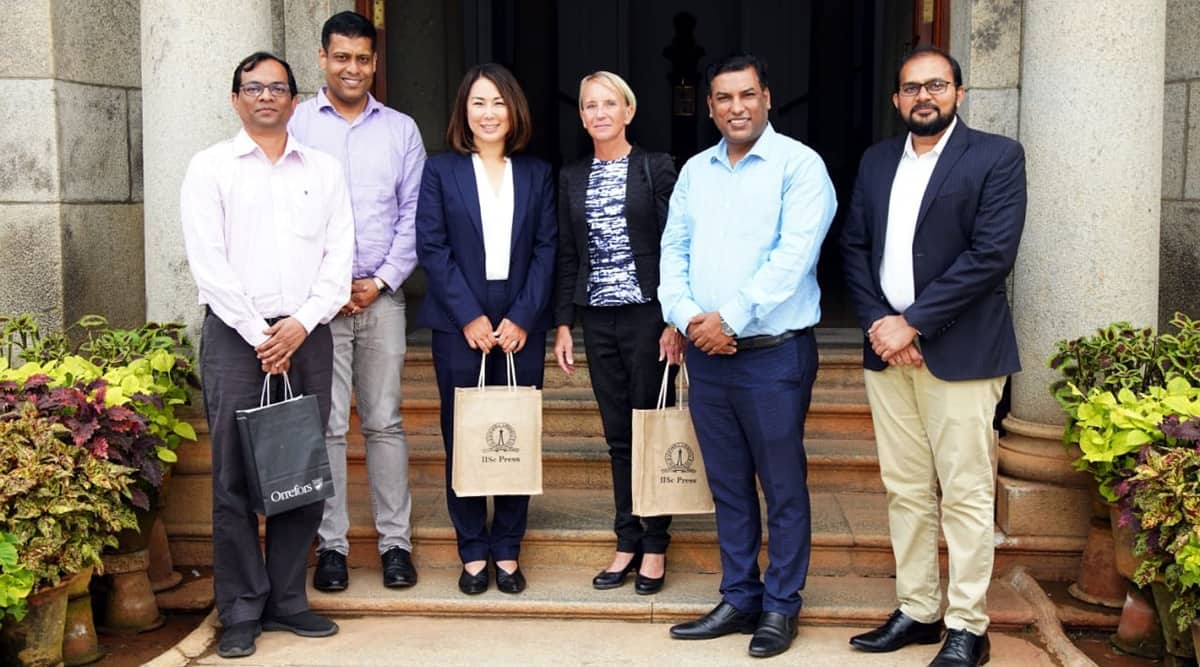 Karnataka CM Basavaraj Bommai and former CM B S Yediyurappa, who were on a visit to the temple town of Tirupati in Andhra Pradesh, inspected the construction of a Karnataka government guest house in Tirupati. A special court for terrorism cases in Karnataka has handed over custody of five key accused in the July 26 murder of BJP youth leader Praveen Nettaru in Dakshina Kannada to the National Investigation Agency (NIA). The NIA approached the special court on Thursday for custody of the accused till August 23 after the Karnataka Police completed custodial investigations on August 16, officials said.

A flex banner displayed by a local Hindu Mahasabha leader at Surathkal extending Sri Krishna Janmashtami greetings sparked a row as it had pictures of Mahatma Gandhi's assassin Nathuram Godse and Hindutva icon V D Savarkar. However, before the controversy spread, the civic authorities removed the banner immediately following complaints on Thursday.

The flex was installed by Hindu Mahasabha local leader Rajesh Pavitran, police sources said. After a complaint was received, the banner was removed on the order of the Commissioner of Mangaluru City Corporation. Police security was beefed up in Surathkal in view of Sri Krishna Janmashtami celebrations, the sources said.

The Hindu Mahasabha had courted a controversy when they displayed a banner with a photo of Savarkar on August 14 at Surathkal flyover. (PTI)

The row over the ‘job over bed’ remark by Congress MLA in Karnataka Priyank Kharge got uglier after a BJP legislator from north Karnataka, BJP MLA Rajkumar Patil Telkur, made a personal attack on Kharge Wednesday, drawing severe criticism. The BJP MLA Thursday released a video apologising for his comments.

Priyank Kharge, who is also in charge of the media cell of the Karnataka Pradesh Congress Committee (KPCC), on August 13 said, “To get government jobs, the young women will have to go to bed and men will have to bribe in Karnataka.” He demanded a probe by the Special Investigation Team (SIT) into recruitment scams and the setting up of Fast Track Courts (FTC).

In a counter-attack, BJP MLA Rajkumar Patil Telkur on Wednesday asked if Kharge’s “sisters got the jobs in the same manner”? (Read more)

For 24 hours: Generally cloudy sky. Light rain likely. Maximum and minimum temperatures are very likely to be around 30 and 21 degrees Celsius respectively.

For 48 hours: Generally cloudy sky. Light rain likely. Maximum and minimum temperatures are very likely to be around 30 and 21 degrees Celsius respectively.

Karnataka higher education minister C N Aswath Narayan on Thursday warned that registrars would be relieved of their duties if universities failed to implement the unified university and college management system (UUCMS), a single-login interface for conducting the admission process in degree colleges.

After a meeting with vice-chancellors, Narayan said all state universities should submit a report on registrars who have failed to implement the UUCMS. (Read more)

Justice Santosh Hegde: ‘The truth is that no political party wants Lokayukta to function effectively, but none has the courage to abolish it’

Supreme Court (retd) Justice Santosh Hegde headed the Lokayukta when it released a report on illegal mining, implicating three chief ministers of the state. He spoke to The Indian Express on the August 11 order abolishing the ACB to reconstitute the Lokayukta police to investigate corruption cases, the institution’s history, the challenges ahead, and the role of political parties in fighting corruption. Johnson T A reported