As per the BJP leadership’s directions, several ministers are holding press conferences at the party office to list out their achievements (Representational)

Karnataka, Bengaluru News Highlights: Amid the recent communal issues in Karnataka, the BJP central leadership has asked leaders of its state unit and ministers to bring the development agenda to the fore and showcase the achievements of the government, in the wake of assembly polls next year. Several ministers are holding press conferences at the party office to list out their achievements.

Karnataka Chief Minister Basavaraj Bommai said Saturday that the state government has nothing to do with an ongoing campaign which seeks a ban on the Wakf Board. Sri Rama Sene chief Pramod Muthalik has, in a fresh campaign on various platforms, demanded a ban on the Wakf Board and the laws that govern it. Reacting to the demand, Bommai said, “People practice their respective traditions. The government is run in accordance with the laws. The government has nothing to do with these campaigns. All are equal in the government’s view. Maintaining law and order in the state is our objective.” The chief minister made the statement in Bidar on Saturday.

The Bruhat Bengaluru Mahanagara Palike has issued a circular prohibiting animal slaughter and meat sale on account of Rama Navami on Sunday. The joint director of the municipal corporation’s animal husbandry department issued a circular stating that slaughter houses would have to remain shut and that the sale of meat would be banned in the corporation limits on the occasion of Rama Navami.

The Karnataka bitcoin scam where politicians and police officials allegedly received kickbacks in the form of bitcoins from an international hacker, arrested by the Bengaluru police in November 2020, has resurfaced again with the Opposition Congress claiming that FBI officials were in India to investigate claims that the hacker had stolen from a foreign bitcoin exchange in 2016.

Srikrishna Ramesh alias Sriki, 26, has claimed in statements given to the Bengaluru police that he had hacked into the British Virgin Islands-based Bitfinex cryptocurrency exchange in 2015-16.

The FBI and other US agencies are investigating the theft of 1,19,754 bitcoins (valued at $4.5 billion at present) from the exchange. Read more

The Congress on Saturday appointed 149 new office-bearers to the Karnataka Pradesh Congress Committee as the party gears up for next year's assembly polls.

Caste and regional representation along with a combination of old and new generation leaders has been taken care of in these appointments, party sources said. (PTI)

Karnataka BJP leader and MLC N Ravikumar on Saturday accused Bengaluru Police Commissioner Kamal Pant of "lying" regarding the recent murder of a 22-year-old youth here, and claimed that the victim's family had stated that the incident took place because he did not know Urdu.

On April 6, Home Minister Araga Jnanendra had stoked a controversy, citing a similar reason for the murder, but had subsequently retracted from it by stating that the incident was actually over road rage, and that his earlier statement was "wrong", as it was based on source-based preliminary information.

The Home Minister's statement had evoked sharp reaction from opposition parties. "Simon (Simon Raj, the victim's friend) was at the spot when the incident took place. He has seen Chandru (the victim) being stabbed, when he said he doesn't know Urdu. His statement is there, do you want more truth than this?" Ravikumar asked. (PTI)

A wild tusker being captured with the help of tamed elephants by forest officials at Churchegudda near Chikmagalur, Saturday. The Karaga festival, which is more than 300 years old, was held exclusively within the Dharmaraya Swamy Temple in the last two years owing to the Covid-19 pandemic.

However, the organisers have decided to take out the ‘Hasi Karaga’ (procession) on April 14 this year. As per local customs, the procession is traditionally taken to the Hazrat Tawakkal Mastan Dargah. The ‘Karaga Shakyotsava’ (the main event) will be held on April 16. Read more It is said that the flowering trees were first introduced by the German botanist Gustav Hermann Krumbiegal. Check out entire gallery 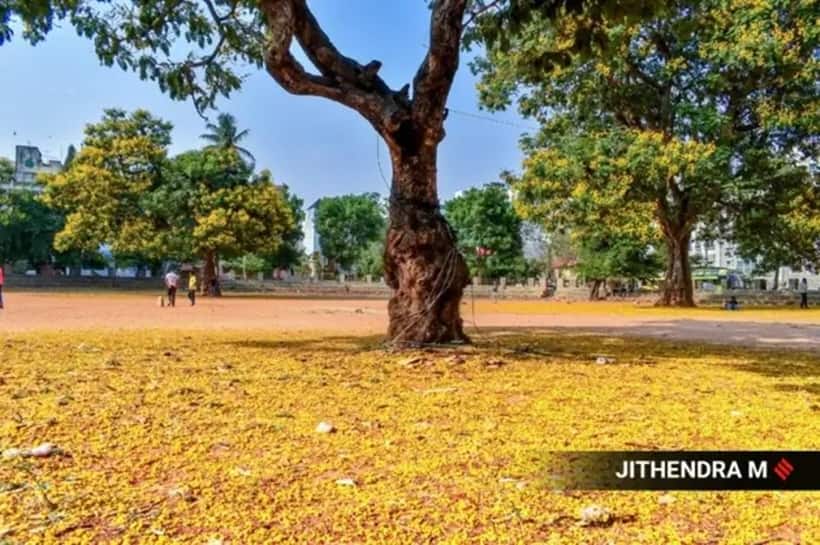 A scooter rider suffered critical injuries after a speeding BMW car that was coming from the opp direction crashed into her vehicle, in Mangaluru.
In a CCTV footage, the speeding car can be seen flying over the median before crashing into the victim’s scooter and another car. pic.twitter.com/uSXkDO28wM

Case registered as 25-yr-old student from Haryana accuses classmates of s...
85-year-old killed as mixer truck hits his bike in Katraj
Basic structure theory of Constitution has stood the test of time, says A...
Sikar gangster killing: A farmer, he took loans to educate his four kids:...
Ethiopian runners steal the show at 36th Pune International Marathon
More from Cities >>
Govt has nothing to do with campaign against Wakf Board: Karnataka CM Bommai

Reacting to the demand, Bommai said, “People practice their respective traditions. The government is run in accordance with the laws. The government has nothing to do with these campaigns. All are equal in the government’s view. Maintaining law and order in the state is our objective.” The chief minister made the statement in Bidar on Saturday.

The state has, of late, witnessed several campaigns along religious lines, including a boycott on halal meat and a ban on Muslim shopkeepers at local temple fairs. Read more

Amid the recent communal issues in Karnataka, the BJP central leadership has asked leaders of its state unit and ministers to bring the development agenda to the fore and showcase the achievements of the government, in the wake of assembly polls next year.

Several ministers are holding press conferences at the party office to list out their achievements. Holding one such press meet on Saturday, senior minister K S Eshwarappa, who is in-charge of Rural Development & Panchayat Raj (RDPR) department, accepted that it is being done as per the directions of the party leadership.

"Yes... (there is a direction from the high command)," he said in response to a question on ministers presenting their progress report to people through the media. (PTI)

Karnataka Home Minister Araga Jnanendra on Saturday said central agencies are looking into the bomb hoax threat received by multiple private schools in Bengaluru via e-mail, with regards to a terror angle, if any.

At least 15 schools in the city and its outskirts received bomb threats through e-mail on Friday morning triggering panic among students, parents and school managements, which the police later declared as a hoax after conducting searches.

"Searches went on till last night. There was no bomb, it was a hoax. Our police are trying to find out as to who was behind the hoax threat, and central agencies are also specially looking into it seriously," Jnanendra told reporters here. The home minister, however, did not specify which central agency is involved in the investigation. (PTI)

The seventh meeting of the Basavanagara Development Council was held under the chairmanship of Karnataka Chief Minister Basavaraj Bommai.

Precautionary dose of Covid-19 vaccine will be available to all above the age of 18 years, at private vaccination centres from Sunday. Precautionary doses of the vaccine can be taken by those who have completed nine months or 39 weeks after the second dose of vaccination.

The precautionary dose of Covid vaccine is already being given to healthcare and frontline workers, and all above the age of 60 years at government vaccination centres. This will be accelerated further. As per official figures, Karnataka has administered a total of 10.47 crore doses of the vaccine and 1.42 crore precautionary doses. Among the total population eligible for the precautionary dose, around 57.6 per cent have already been provided the jabs.

Additionally, the state has also administered 13,27,985 doses of Covid vaccines to children aged between 12-14 years, as a part of the first dose and the administration of second doses for this age group will start shortly.

Precautionary dose for COVID-19 vaccine will be available to everybody belonging to the 18+ age group at private vaccination centres starting April 10. Precautionary dose of the vaccine can be taken by those who have completed 9 months or 39 weeks after the second dose of vaccination.

The Bruhat Bengaluru Mahanagara Palike (BBMP) Friday issued a circular banning the sale of meat across Bengaluru on April 10 on the occasion of Ram Navami. Read more

An FIR has been registered against Karnataka minister KS Eshwarappa and BJP leader Channabasappa SN on charges of making provocative statements following the murder of Bajrang Dal leader Harsha in February. Police have registered a case following an order by a local court.

"On the basis of a complaint, we have registered a case; a probe is underway," said Laxmi Prasad, SP Shivamogga. (ANI)

The Bengaluru civic agency has prohibited animal slaughter and sale of meat on Sri Rama Navami on April 10. “There will be a blanket ban on the slaughterhouses, animal slaughter and the sale of meat on Sri Rama Navami,” the joint director of the animal husbandry department of the Bruhat Bengaluru Mahanagara Palike said in the order, The order is based on BBMP chief commissioner Gaurav Gupta's circular on April 3.

A BBMP official said every year on Sri Rama Navami besides Gandhi Jayanti, Sarvodaya Day and other religious events, there is a ban on the sale of meat and animal slaughter. (PTI)

Covid warriors on Friday staged a protest at Freedom Park, Bengaluru for the continuation of vacancies at different levels in the health department. This comes after the Karnataka Health department failed to fulfill its promise to regularize their jobs and provide job security.