Karnataka Budget 2021-22 March 8 Highlights: The Chief Minister, who holds the finance portfolio, had already indicated that the effect of COVID-19 would be visible on the budget. 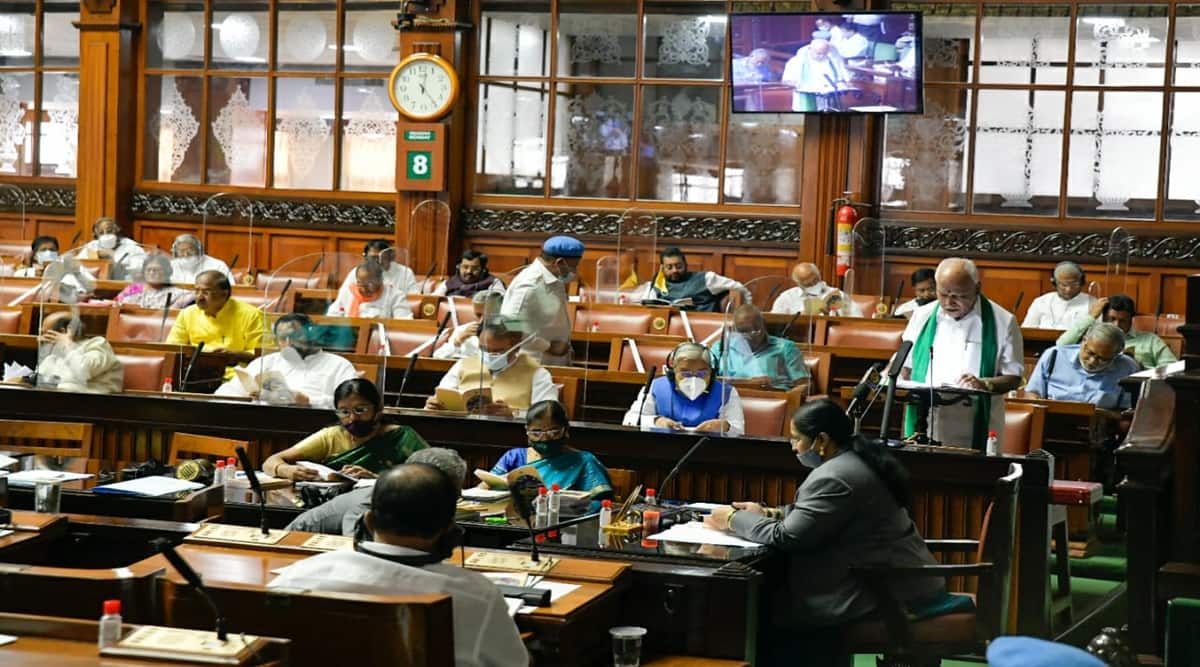 Karnataka Budget 2021 March 8 Highlights: Karnataka Chief Minister B.S. Yediyurappa presented his eighth State Budget at noon on Monday. The Chief Minister, who holds the finance portfolio, had already indicated that the effect of COVID-19 would be visible on the budget. “Amid the COVID-19 situation, we have to ensure development in all the districts across Karnataka. This time emphasis would be on women empowerment, tourism, agriculture and irrigation,’ the CM had said.

CM Shri B.S.Yediyurappa will present the State Budget for the financial year 2021-22 at 12 noon on Monday, March 08th, 2021#KarnatakaVikasaPatra2021 pic.twitter.com/wm0ZkPutBj

BS Yediyurappa is presenting the eighth budget in his political career and the third during his present term as Chief Minister since July 2019.

Opposition Party Congress leaders in the assembly protested by wearing black armbands during the budget presentation by the Karnataka Chief Minister BS Yediyurappa. Opposition party leader Siddaramaiah along with Congress MLA’s boycotted the budget after a few minutes of protest.

Catch the latest news in Bengaluru and Karnataka as we bring you live updates on Karnataka budget, COVID-19, COVID-19 vaccination, lockdown 6.0 and phase 6 of the unlock across the state and more throughout the day. Also read Chennai Hyderabad news

A budget for development of all: Health Minister

Despite the revenue crunch due to Covid-19 pandemic, CM BS Yediyurappa has presented a comprehensive budget focusing on development of every sector and welfare of every section of the society, said Karnataka Health Minister Dr. K Sudhakar on Monday.

"Since this is the first budget after pandemic, it is natural for everyone to expect allocation of more funds to Healthcare and Medical Education sectors. However, CM has carefully done a balancing act making the best use of limited resources available. I am confident that CM will allocate more funds in the coming days as the state's revenues return to normalcy", he said.

"The budget has promising announcements for Chikkaballpura including comprehensive development of Nandi Hills into a world-class tourist destination. The establishment of International Science Centre in a span of 200 acres in Hosur village near Gowribidanur which is the birth place of  Dr.H.Narasimhaiah is a tribute to the great educationist", the minister added.

Karnataka Chief Minister BS Yediyurappa presented his eighth state budget in Bengaluru today. A major portion of the budget was dedicated towards the welfare and safety of women and development work across the state, which evoked positive response from citizens.

A country is truly successful when it's women are safe, independent and have the opportunity to bloom! So whether it's the safe city project, the commercial assistance or the low interest loans - It's great to see the Karnataka government making big moves to empower our women! - Sangeeta Lala, President, Fanzart

We welcome the Budget as very positive and encouraging especially during this covid times starting with schemes towards doubling farmers income, setting of new industrial parks and supporting Atma Nirbhar Abhyan, reduction of stamp duty towards affordable housing and also has many initiatives for women coinciding with International women's day. Was expecting some relief on fuel by reducing some levies which it seems has to wait for some more time. - Prashanth Reddy, Managing Director, Fundermax India

It also proposed re-examination of various laws and rules for creation of conducive environment for women taking up employment.

Action was also proposed to incorporate gender budget and child budget in the Panchayat Raj system.

It also proposed establishment of centre of excellence in collaboration with NIMHANS (National Institute of Mental Health and Neuro Sciences) and National Law School for giving assistance and guidance to women subjected to atrocity.

For the women who have obtained licence from Agricultural Produce Market Committee, 10 per cent reservation was proposed in the allotment of site, godown, shop, shop-cum-godowns in the premises.

Commencement of 'Women Protection and Empowerment Mission' was proposed under the direct supervision of the Chief Minister.

The government proposed to support women entrepreneurs by implementation of the 'Elevate Women Entrepreneurship' programme at an expenditure of Rs. 5crore.

Technical support to small enterprises of women was announced by the government which also proposed encouragement to 25,000 women through 2,260 micro enterprises.

The government also proposed to provide market to the products manufactured by women self-help groups and women entrepreneurs, organisation of annual fares at divisional level and implementation of e-market facility.

Yediyurappa announced loan facility of up to Rs. 2 crore at a subsidised rate of four per cent through Woman Development Board/Karnataka State Finance Corporation to women entrepreneurs in the service sector.

On international women's day, Karnataka Chief Minister B S Yediyurappa on Monday announced a proposal to provide six-months child care leave to women employees of the Government. He also announced a grant of Rs 37,188 crore for women oriented programmes.

Presenting the 2021-22 budget in the Legislative Assembly, he proposed upgradation of Anganwadis situated in Bengaluru and other cities into creches for the benefit of urban working women. Action would be taken to open creches in two major government offices in each district centre, the Chief Minister said, announcing a slew of initiatives benefiting women.

"Women employees of the state government will be given a total of six months child care leave along with maternity leave which is already in existence. This will be a supplementary step towards the welfare of women who are a very important part of the administrative machinery," he said. (PTI)

BS Yediyurappa is presenting the eighth budget in his political career and the third during his present term as Chief Minister since July 2019.

Opposition Party Congress leaders in the assembly protested by wearing black armbands during the budget presentation by the Karnataka Chief Minister BS Yediyurappa. Opposition party leader Siddaramaiah along with Congress MLA’s boycotted the budget after a few minutes of protest.

In the month-long session, both houses of the legislature will discuss the budget before passing it for implementation from April 1.

Karnataka Chief Minister BS Yediyurappa announced a total allocation of Rs.52,529 crore in the year 2021-22 for the purpose of giving stimulation to the economic development of the State.

Bengaluru is also set to get leisure space with three tree parks with natural tracks, children's playground and drinking water.

Karnataka Chief Minister BS Yediyurappa, in his Budget speech announced a total allocation of Rs.7,795 crore in the year 2021-22 for the development of Bengaluru city.

A grant of Rs.850 crore has been announced in the year 2021-22 for Bengaluru sub-urban rail project. “The expeditious completion of second terminal building of Kempegowda International Airport; increase in the maximum annual passenger capacity to 60 million,” he said.

“Implementation of K-100 project at an expenditure of Rs.169 crore to develop Koramangala Valley as a tourist attraction. Development of Bengaluru Signature Business Park of international standards near Kempegowda International Airport,” he added.

Karnataka Budget: Rs. 2 crore to enable use of Kannada in Information Technology

Karnataka Chief Minister BS Yediyurappa announced the development of a suite of technical tools for Kannada language at an expenditure of Rs. 2 crore to enable use of Kannada in Information Technology.

Meanwhile, digitization of all works from the times of Adikavi Pampa to Muddanna; are to be made available through internet.

The CM also announced the construction of new Anubhava Mantapa at Basavakalyana at a cost of Rs.500 crore; works to start soon.

A grant of Rs.5 crore will be provided for the development of the birth place of Jagajyothi Basavanna at Ingaleshwara village in Basavanabagevadi taluk. 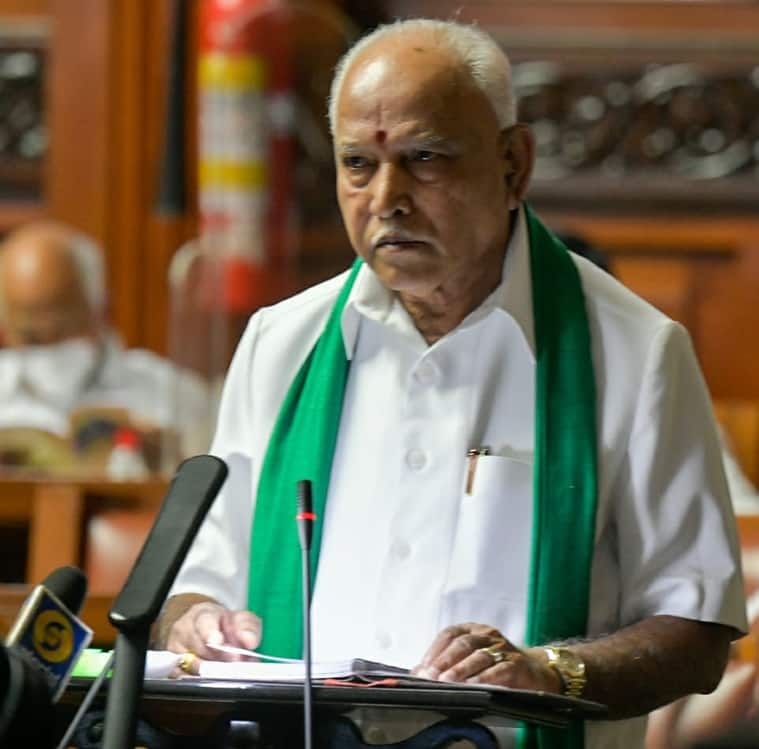 Karnataka Budget: BSY announces establishment of one Goshala in each district

Chief Minister BS Yediyurappa in his budget speech announced one Goshala for each district for the protection of cattle wealth in the state.

Yediyurappa also announced continuation of ‘Anugraha Koduge’ scheme which provides compensation for the accidental death of sheep and goats.

Chief Minister BS yediyurappa in his budget speech announced implementation of programme with an outlay of Rs.500 crore for the promotion of organic farming.

“Under Atma Nirbhar Bharat Abhiyan scheme, a food park will be established in Ittangihal village of Vijayapura district. Reservation for children of farmers in the agricultural universities to be increased to 50%,” Yediyurappa said.

Karnataka Budget: No rise in sales taxes on petrol and diesel

In his eighth budget speech, Karnataka Chief Minister BS Yediyurappa said, “Decision not to increase Karnataka Sales Tax (KST) on petrol and diesel in the year 2021-22."

Karnataka Budget: Govt to upgrade Anganwadis in all districts

On account of International Women's Day, in his Budget speech for 2021-22 Karnataka Chief Minister BS Yediyurappa said that the government will upgrade Anganwadis to Shishu Palana Kendra in all district offices. Women entrepreneurs of service sector will be provided with Rs 2 crores loan at four per cent interest.

Karnataka Government will construct Yathri Nivas at Ayodhya at a cost of Rs. 10 crores.

According to the budget, the Uttar Pradesh government will provide 10 acres of land for the construction of Yathri Nivas. 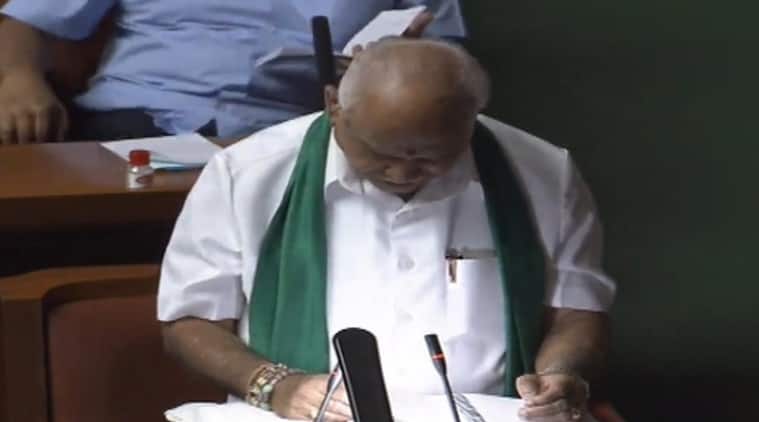 The Yediyurappa on Sunday evening tweeted saying that his budget will be a ‘Vikasa Patra’ (development document). The Chief Minister’s Twitter handle said he will present the budget at 12 noon with the hashtag Karnataka development document.

In the month-long session, both houses of the legislature will discuss the budget before passing it for implementation from April 1.

Yediyurappa in the budget on March 5, 2020, had presented an outlay of Rs 2,37,893 crore. This was just before the outbreak of the pandemic in India.