Karnataka Lok Sabha Elections 2019 Voting Highlights: Voter turnout poor in Bangalore when compared to other parts of the state. The estimate voter turnout in Bangalore North is 48.28 %, Bangalore Central 42.43 %, Bangalore South 49.36 % and Bangalore rural 59.43 %. An average of 61.94% voters turned up in 14 Lok Sabha constituencies of Karnataka to pick an MP on April 18.

While Dakshina Kannada tops the chart with the highest voter turnout (72.97%), constituencies in and around Bangalore showed poor figures as usual.

As many as 90,997 police personnel will be deployed across the state at all polling booths. The police department has identified 11,992 booths as critical in the state and has deployed extra security forces for these booths.

Bengaluru is infamous for its poor voter turnout during elections, despite the election commission conducting various awareness campaigns to bring the voters to the polling booth. In the 2018 assembly election, only 54.76% of people from the city voted.

An average of 61.94% voters turned up in 14 Lok Sabha constituencies of Karnataka to pick an MP on April 18.

While Dakshina Kannada tops the chart with the highest voter turnout (72.97%), constituencies in and around Bangalore showed poor figures as usual.  Here are the estimates:

Rahul Gandhi to be in Karnataka tomorrow

He will fly to Karnataka after a rally held at P.M. Ground, Bajipura in Gujarat.

Kumaraswamy hits back at Modi

Karnataka CM H.D. Kumaraswamy takes a dig at PM Modi criticising him of resorting to "propaganda  movie and TV channel in his name."

Kumaraswamy's tweet is an instant reply to  PM Modi's mockery on him from the latter's Bagalkot rally held a few hours back.

PMModi alleged opposition parties use emotions 4 votes.But it is Mr.Modi himself who is playing with the emotions of people inthe name of religion& terrorism.Had he been confident of his devlpmnt work to bring in votes Y would he resort to propaganda movie&TV channel in his name?

LIVE polling trends at other constituencies are as follows:

Complaint filed against Tejasvi Surya for campaigning on social media

According to reports, a pliant filed against BJP's Bangalore South candidate Tejasvi Surya for campaigning on social media when election is underway. Election Commission returning officer has filed the complaint with Siddapura police station in Bangalore South.

Voting is our Right, Voting RIGHT is our Responsibility.

I have casted my Vote for a strong, Vibrant & Samrudh Bharat.

Do come out & exercise the most powerful thing we own!

At 4 pm, here are the LIVE updates:

"The weak CM is crying and ministers are involved in corruption. They know their days are numbered and therefore, they have started looting the state," he said.

Voters turnout in the key Lok Sabha constituencies in and around Bangalore:

Members of Bangalore Political Action Committee (B.PAC) civic group in Bangalore distribute saplings to voters who have cast their votes.

'People should get over divisive politics to work towards nation building'

"People should get over divisive politics to work towards nation building,” says Imtiaz Baig a Bangalore South voter who travelled from Hyderabad to exercise his right to vote. 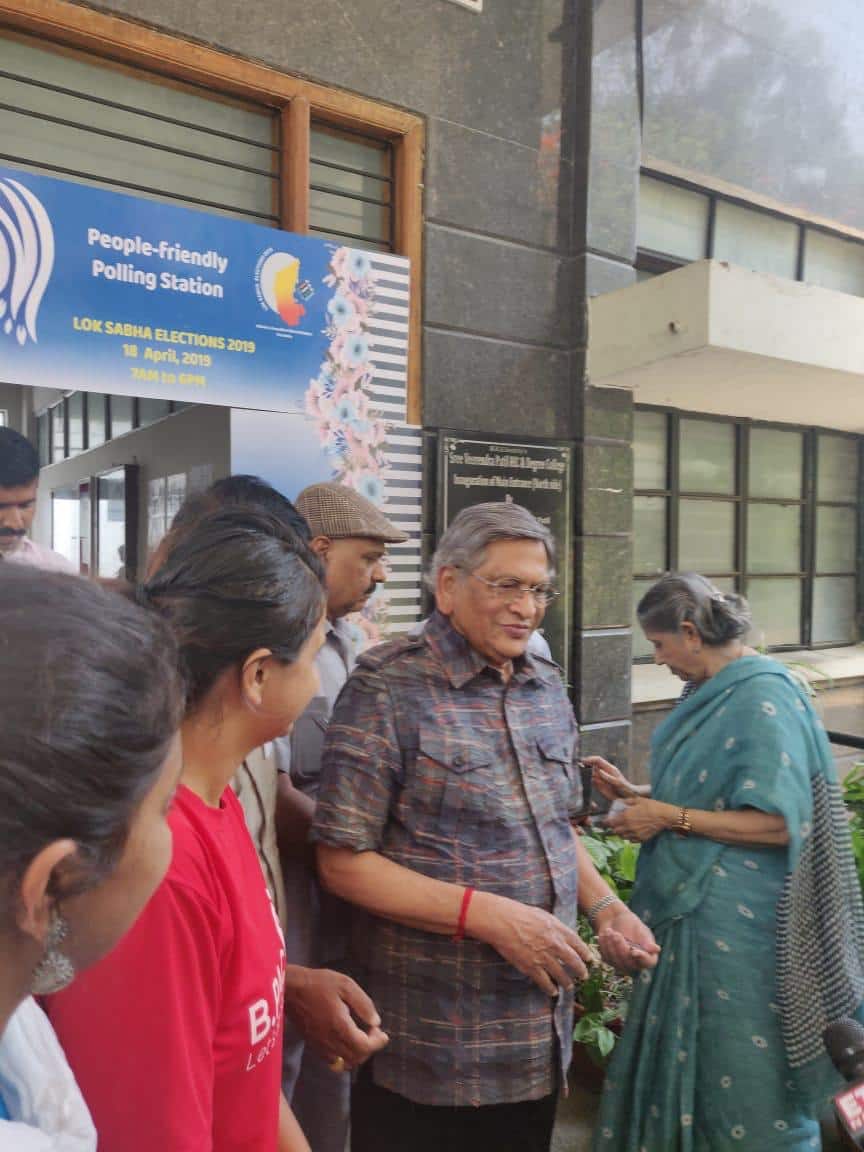 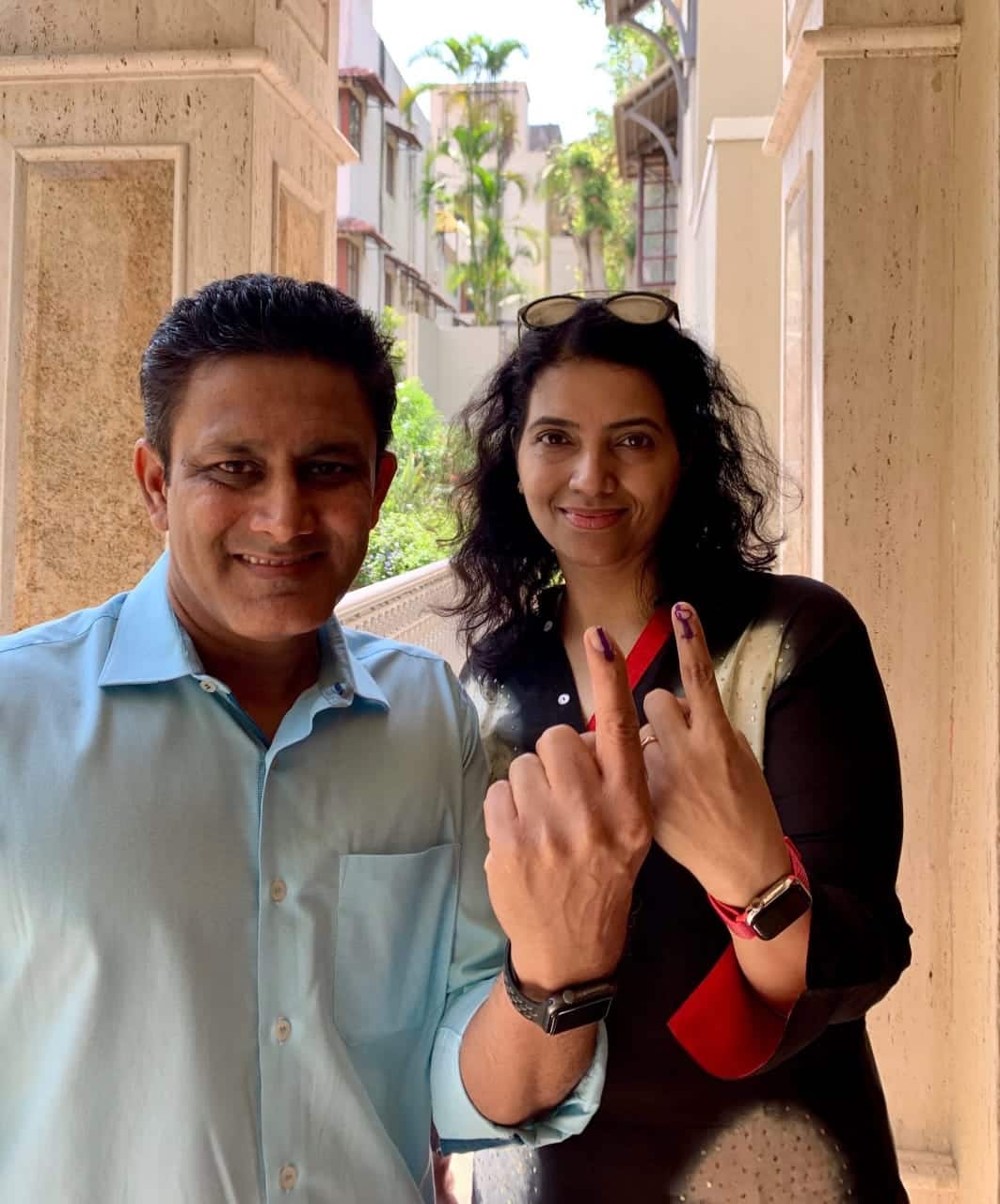 Siddaramaiah takes a dig at BJP candidates on Twitter

Think before you vote!!

There is a woman abuser standing from @BJP4India in Bangalore South

There is a woman cheater standing from BJP in Mysore

There is a woman molester standing from BJP in Mangalore

Think about your sister, wife, mother &friend before u vote!#VoteMaaDi pic.twitter.com/N9Koef0Jag

As 21.83% voters chose to exercise their right to vote in Karnataka, here are the numbers from key Lok Sabha constituencies in and around Bangalore:

PC Mohan's poll advice: Nothing should stop you from voting

Bangalore Central incumbent MP P.C. Mohan has encouraged voters to turn in huge numbers to exercise the right to vote.

I Voted with family and friends!

Happy to see a huge turnout & long queues of voters waiting patiently for their turn.

I appeal to all voters, esp the first-time voters, to vote for sure.

Voters from 14 Lok Sabha constituencies in Karnataka will cast their votes as the second phase of the 2019 Indian general elections is underway. While the Congress-JD(S) alliance is confident of gaining more votes from the state, BJP is fighting the polls with one strong agenda - Make Modi PM Again.

At Bangalore North, incumbent BJP MP D.V. Sadananda Gowda faces tough competition from Congress minister Krishna Byre Gowda. The latter starred in a video that was released a few hours before PM Modi's Bangalore rally questioning BJP's fake promises made in 2014. This later became a talking point in and around the constituency, as campaigning reached its culmination.

BJP's youngest candidate, 28-year-old Tejasvi Surya contests from Bangalore South where he takes on Congress veteran B.K. Hariprasad. Even though Bangalore South seat has been an invincible BJP stronghold close to two decades, the Congress sniffs a chance highlighting the debutant's political inexperience.

Interestingly, Bangalore Central is the only constituency in the state which expects a triangular contest. However, the situation is not easy for independent candidate Prakash Raj as his rivals are BJP's P.C. Mohan and Congress' Rizwan Arshad.