Vayu Vajra buses are AC Volvo buses that operate from different parts of the city to Kempegowda International Airport locate in Devanahalli, on the outskirts of Bengaluru. (File)

“Since restrictions will be lifted from June 8, the district administrations must take all precautionary measures and strictly follow the guidelines issued by the Central Government,” Yediyurappa said.

At the same time, the Karnataka government began collecting swabs of people arriving from Maharashtra at railway stations in Bengaluru. The waiting lounge on platform number 8 of KSR Bengaluru railway station turned into a coronavirus testing kiosk soon after the special train from Chhatrapati Shivaji Maharaj Terminus (CSMT) Mumbai arrived.

However, health officers added that the same would be discontinued as a revised Standard Operational Procedure (SOP) is awaited to be issued soon.

Sriramulu was welcomed by his followers with a huge apple garland and flowers in a procession at Parashurampura in the district. In the video, the minister was seen waving at a large crowd and was not wearing a mask, which is compulsory in public places.

90% passengers feel air travel to be safe among other modes, survey finds at Bengaluru Airport

‘Voice of Pax’, a survey conducted by BIAL to understand passenger perception and expectation towards air travel amid the coronavirus pandemic, revealed that 90 per cent of passengers considered air travel much safer compared to the other modes. According to the survey, 87 per cent participants also felt airports are safer compared to train and bus stations.

“The survey is being held in five phases. During the three concluded phases, more than 3500 passengers were covered using a systematic random sampling methodology, chosen from a database of over 150,000 previous passengers from across age, profession, group size, frequency of flying and sector of flying,” a BIAL spokesperson told Indianexpress.com.

#Bengaluru: @BMTC_BENGALURU to resume Vayu Vajra (AC Volvo) services to Kempegowda International Airport from June 3. As many as 23 services will be operated daily on the following 5 routes (see attachment): @IndianExpress pic.twitter.com/sbWlFZiYeA

"Since restrictions will be lifted from June 8, the district administrations must take all precautionary measures and strictly follow the guidelines issued by the Central Government," Yediyurappa said. He was speaking in a video conference with DCs, CEOs, and SPs of Kalaaburagi, Vijayapura, Udupi, Yadagiri, Raichur and Belgaum held in Krishna, the CMs official residence in Bengaluru. 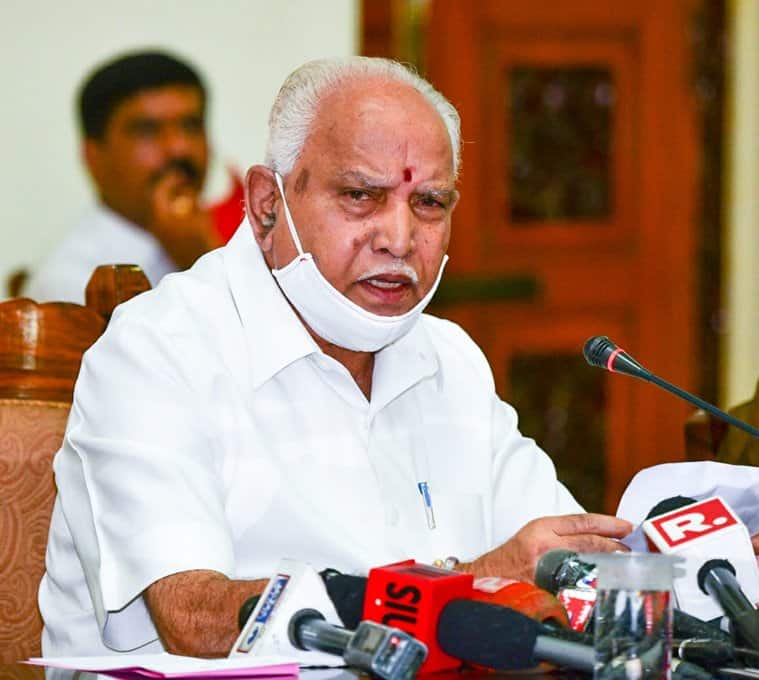 BBMP Commissioner B H Anil Kumar Tuesday inspected the location for a proposed grade separator project at BDA Complex, Nagarbhavi. Grade separators are arrangements made to ensure traffic from various directions crossing a junction are allowed to cross each other at different heights.

Here are some pictures:

Inspected the location for a proposed grade separator project at Nagarbhavi BDA complex.

The Karnataka government has set up a COVID-19 kiosk at the Krantivira Sangolli Rayanna (KSR) railway station in Bengaluru to collect live swabs from passengers arriving for business in the city. According to Jawaid Akhtar, Additional Chief Secretary (H&FW), the passengers will be sent directly to an institution quarantine facility after the swab collection and will be permitted to step out only after they test negative. Their results will be obtained within two days.

To address the shortage of ventilators due to COVID-19, the Indian Institute of Science (IISc) Bengaluru announced it has successfully completed the prototype of an indigenously developed Intensive Care Unit(ICU) grade ventilator. According to IISc, the ventilator supports both invasive and non-invasive ventilation. The ventilator uses only components made in India or easily available in the domestic supply chains.

“The ventilator is developed by PRAANA team, the team took about 35 days to go from the drawing board to a proof-of-concept system, and then a working prototype in another two weeks,” IISc said in a Facebook post. “Built using a custom designed pneumatic system controlled by a microprocessor, it uses proprietary algorithms and techniques to blend air and oxygen in the desired ratio. It also has fine-grained control of patient-side respiratory parameters such as respiration rate, inspiration to expiration ratio, FiO2, and PEEP,” IISc added.

In a first, Karnataka has arranged a COVID-19 testing kiosk at the Krantivira Sangolli Rayanna (KSR) Bengaluru railway station to test passengers deboarding from a special train from Mumbai CST. The swabs will be taken by experts in the waiting lounge of the station.

To date, 385 cases have been confirmed in Bengaluru since the first coronavirus positive case in Karnataka was recorded in the city on March 9. While 237 people have recovered from the infection so far, 136 patients are at designated hospitals under treatment for COVID-19. The city has also recorded 11 pandemic-related deaths so far.

Sensors to be installed in storm water drains in Bengaluru

According to a BBMP press release, to prevent any untoward incidents this monsoon, 500 personnel from the Civil Defence will be deployed across the city. Along with KSNDMC and the Revenue department, BBMP will install sensors in Storm water drains (SWD) to alert on water levels and BBMP has proposed to increase the number of sensors in SWD to 200.

“The sensors fixed in SWD will trigger an alarm if the drains fills up 75 per cent of its capacity during the rains. In less than a second, the sensors will alert the control room and officials in-charge of the area will rush with the squad for rescue operation,” the release added.

The Karnataka State Natural Disaster Monitoring Centre (KSNDMC) and Bruhat Bengaluru Mahanagara Palike (BBMP) have identified 210 vulnerable spots in eight zones of the city that are prone to flooding.

To tackle any rain-related emergencies in the city, BBMP has also formed eight teams one for each zone, with jurisdictional officials from the BBMP traffic police, forest department, Department of Fire and Emergency Services, Bangalore Water Supply and Sewerage Board (BWSSB) and Bangalore Electricity Supply Company (Bescom).

The Bangalore Metropolitan Transport Corporation (BMTC) has extended the timings of bus services in Bengaluru in phase one of unlock. Buses will now ply in the city from 5 am to 9 pm. Close to 4000 non-AC buses and over 75 AC buses will be pressed into service from today.

Polls to four Rajya Sabha seats from Karnataka will take place on June 19, the Election Commission of India announced on Monday. While the issue of notifications begins today, the last day to make nominations is June 9. According to the schedule released by EC, nominations will be scrutinised on June 10 and candidates can withdraw the same then until June 12.

Further, the Commission has directed the Chief Secretary to depute a senior officer "to ensure that the extant instructions regarding COVID-19 containment measures are complied with" while making arrangements for the polls.

The elections are conducted as the term of four members -- D Kuprendra Reddy, Prabhakar Kore, Rajeev Gowda, and B K Hariprasad -- ends on June 25.

In the light of increase in demand, the Karnataka State Road Transport Corporation (KSRTC) has announced that bus services will be extended by two hours. The buses will now ply across the state till 9 pm.

A man bound for Visakhapatnam died at the Kempegowda International Airport after collapsing in the washroom on Sunday evening. He was found unconscious in the washroom opposite gate number 3 and was taken to nearby Aster Hospital where doctors declared him dead on arrival. The police have sent his body for postmortem to determine the cause of death and will also carry out a COVID-19 test on the deceased passenger.

Karnataka Pradesh Congress Committee (KPCC) president D K Shivakumar criticised the government of not having a priority on what had to be done respecting the time (of the pandemic).

Karnataka Pradesh Congress Committee (KPCC) president D K Shivakumar criticised the government of not having a priority on what had to be done respecting the time (of the pandemic). "Now is not the time to build any statue. It is time to sort out problems of the state. The state has to be developed. {problems of migrants, labourers, farmers and other sectors need to be addressed instead," he said.

Also read | Karnataka: Here are the rules for lockdown 5.0

Meanwhile, a cop working at the Karnataka Police headquarters in Bengaluru tested positive for coronavirus. Identified as P-3195 by the Department of Health and Family Welfare Services, the constable attached to the internal security division of the DG-IG office is part of the Karnataka State Industrial Security Force.

Following the result, the premises of the headquarters has been sanitised. Police officers claim that the infected cop had in no way come in contact with the top brass working from the same campus including DGP Praveen Sood.