Karnataka Bengaluru Coronavirus (Covid-19) Latest News July 1 Highlights: The Sunday lockdown in Karnataka will be reimposed and enforced every week "until further others" from July 5.

The roads were blocked by dumping mud on the roads.

Following the latest trend of a sudden rise in fresh cases and fatalities linked to Covid-19 on a daily basis, several leaders of the opposition had urged the government to announce a complete lockdown.

The Sunday lockdown in Karnataka will be reimposed and enforced every week “until further others” from July 5. No activity other than essential services and supplies will be allowed then.

Medical experts in Karnataka on Wednesday suggested the government to give priority to patients with comorbidity and those in serious conditions to bring down the fatality rate linked to the Covid-19 pandemic. In a meeting convened by Chief Minister B S Yediyurappa in Bengaluru to strategise Covid-19 containment plans, medical experts also suggested that treating asymptomatic and mildly symptomatic patients in home isolation will be appropriate as it would lessen the burden on hospitals.

Watch| Would do it again if required: BJP corporator who unclogged overflowing drain

#ManoharShetty, a BJP corporator from Karnataka is making headlines for not thinking twice before diving into a manhole to unclog it. pic.twitter.com/pHDJPyX5q8

#Bengaluru: Preparations are underway at Koramangala Indoor stadium which will be converted into a Covid Care Centre to treat asymptomatic #Covid_19 patients. @IndianExpress

The roads were blocked by dumping mud on the roads. According to reports, roads leading to Dakshina Kannada district, Karnataka were blocked in Manjeshwar, Adhur, Badiadka and Rajapuram.

As of now, the pass facility is only available at Talapady. The blockade comes against the backdrop of the rising number of Covid-19 cases in Dakshina Kannada. In Dakshina Kannada, there are 292 active cases of Covid-19, with 44 new cases reported on Tuesday. 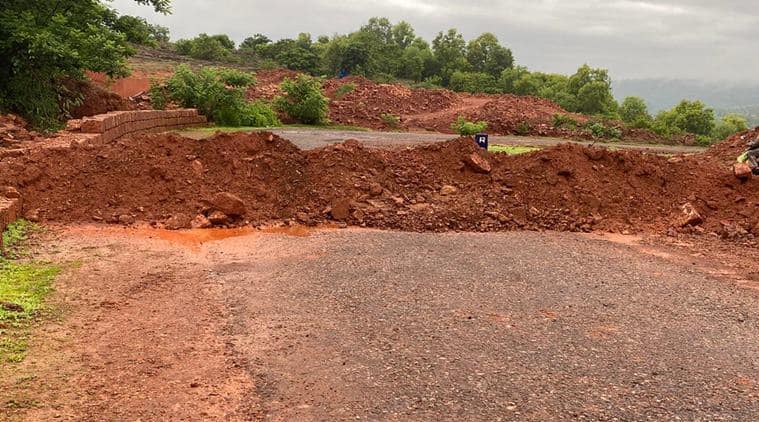 The decision was taken in the wake of converting government college hostels to Covid Care Centres for the treatment of asymptomatic patients as the number of patients kept increasing.

"The plan of turning government campuses into Covid relief centres is the need of the hour and we are with the decision. Yet, this short notice has created a tension-filled atmosphere amongst students," Apoorva C M, Vice President, AIDSO Bengaluru District Committee said.

Students had been asked to go to their natives in March when lockdown began. However, they had left their belongings in their rooms, for which students are forced to arrive now, she added.

A Buddhist monk choked to death while eating a samosa; police registers case

An 18-year-old Buddhist monk identified as Bayar Javaklan Dashdorj from Mongolia, residing at Tibetan settlement camp in Mundagod in Uttara Kannada district choked to death on Tuesday while eating a samosa.

According to Karnataka police, the deceased was living in Doeguling Tibetan Settlement in Mundagod Tibetan Camp. The police have registered a case in the Mundagod Police station. Sunday lockdown: Mysuru zoo to be open on Tuesdays instead

The Sri Chamarajendra Zoological Gardens and Karanji Lake Nature Park in the city will be closed for public viewing on Sundays, in the wake of the Karnataka government announcing lockdown on Sundays beginning July 5.

However, these will be open on Tuesdays — the usual day-off — in this regard, a circular issued on Wednesday read.

As the Secondary School Leaving Certificate (SSLC) exams continue in Karnataka, students will answer the Social Science paper on Wednesday.

According to Karnataka Secondary Education Examination Board (KSEEB), the exams that began on June 25 will to continue till July 4 as scheduled, despite growing concerns among many in the wake of the rise in coronavirus-related numbers in the state.

COVID19: KSRTC to stamp the hand of all passengers

The Karnataka State Road Transport Corporation (KSRTC) has decided to stamp the hand of all passengers before they are allowed to board the buses.

According to KSRTC, the decision to employ hand-stamp was made in the wake of the sudden jump in the number of cases reported from Bengaluru and other districts in the state.

KSRTC officials said that this move is to instil confidence among its commuters. The round stamp is, however, different from the 'home-quarantine' stamp.

Covid-19: 63% of Karnataka patients in ICU are in Bengaluru

Over 63 per cent of the total number of Covid-19 patients admitted to Intensive Care Units across hospitals in Karnataka are in Bengaluru alone.

According to statistics shared by the Department of Health and Family Welfare Services, as many as 171 patients are admitted to ICU facilities in hospitals located in Bengaluru. As of June 6, the number of patients in ICUs in the city was five.

In total, across hospitals in the state, 271 Covid-19 patients are admitted to ICU facilities, as on Tuesday.

Sunday lockdown in Karnataka till August 2; marriages fixed will be allowed

The Karnataka government announced a complete lockdown on five Sundays in the state, starting from July 5 to August 2. However, marriages already fixed on these days shall be permitted, the state government's Unlock-2 guidelines said.

The order says the number of guests in the marriage should not exceed 50. The order issued by Chief Secretary T M Vijay Bhaskar by and large implements the Unlock 2 guidelines issued by the centre, that will be in force until July 31.

The government further ordered, "All government offices, Boards and Corporations, except those operating and maintaining essential services, shall remain closed on all Saturdays till the second week of August.

During the Sunday lockdown and the 8 pm-5 am curfew, only essential activities will be allowed, including “operation of industrial units in multiple shifts, movement of persons and goods on national and state highway/major district roads, loading and unloading of cargo and travel of persons to their destinations after disembarking from buses, trains and airplanes,” the order stated.

The Bengaluru Metropolitan Transport Corporation (BMTC) — in charge of operating buses in Bengaluru — has decided to aligned its services in accordance to the state government’s new night curfew timings.

Depot managers in the corporation have been told to halt operations of buses before 8 pm across zones in the city.

However, BMTC, in a recent circular, has stated that operations can be stretched till 9 pm only in case of heavy congestion at major terminals like Kempegowda Bus Station, Shivajinagar, Banashankari, Kengeri, and Yeshwantpur among others. Facing criticism over a video clip that showed bodies of coronavirus victims being dumped in a large pit in Karnataka’s Bellari, Deputy Commissioner (DC) S S Nakul Tuesday tendered an “unconditional apology” and said he is “deeply upset and sorrowful at the manner in which the remains of the deceased were handled.”

In the video that surfaced online, six men wearing Personal Protective Equipment (PPE) kits are seen dumping the corpses covered in black body bags into large pits in what appears to be a cremation ground.

Appreciating efforts put in by doctors to combat the Covid-19 pandemic, Karnataka’s Medical Education Minister K Sudhakar thanked them for putting in their best efforts for humanity, working round the clock to serve the world.

A qualified doctor himself, Sudhakar tweeted, “The selfless service of doctors to care & cure mankind is invaluable & manifests the saying Vaidyo Narayano Harih.”

As Shivakumar takes charge, Karnataka Congress to put LED at every panchayat to screen event

Set to take over formally as president of the Karnataka Pradesh Congress Committee on Thursday, D K Shivakumar on Tuesday said he wants to convert the Congress’s mass base into a cadre base.

And he is attempting to do something which no Congress state unit has done before.

On 28 May, the 400-metre flyover, named after the freedom fighter and Hindutva ideologue, was scheduled to be unveiled by Karnataka Chief Minister B S Yediyurappa on Savarkar’s birthday, but BBMP called the ceremony off at the last moment citing Covid-19 lockdown.

A controversy erupted over flyover with both the Congress and the JD(S) opposing the decision of the state’s BJP government to name it after Savarkar.

Meanwhile, facing criticism over a video clip that showed bodies of coronavirus victims being dumped in a large pit in Karnataka’s Bellari, Deputy Commissioner (DC) S S Nakul Tuesday tendered an “unconditional apology” and said he is “deeply upset and sorrowful at the manner in which the remains of the deceased were handled.”

At the same time, facing a brunt due to Covid-19 lockdown, the tourism industry in Coorg (Kodagu) has come up with an innovative initiative to attract tourists.