Karnataka Bengaluru Coronavirus June 29 Highlights: As Karnataka, and especially capital city Bengaluru continued to break its own records of statistics related to the coronavirus pandemic over the weekend, the government is now on its toes to ensure steps to contain the same.

Among many measures, the state government decided to reimpose Sunday curfews from July 5. The government also decided to extend the timing of night curfew (from 9 pm to 5 am) from 8 pm to 5 am with effect from June 29. Besides, all government offices shall remain closed on all Saturdays from July 10.

Meanwhile, in the last fortnight, Bengaluru reported 2624 fresh cases and 56 fatalities while 206 people recovered from the infection.

#NightCurfew| This is how an area in #Bengaluru South looks at 9.10 pm. The govt had ordered night curfew from 8 pm to 5 am daily, beginning today (June 29). @IndianExpress pic.twitter.com/nKonfDHWUI

After the meeting, Yediyurappa claimed the crisis in the state, including the same in Bengaluru, is "under full control."

"While major metropolitan cities like Mumbai, Delhi, Chennai and Kolkata have reported a very high number of cases, it is under control in Bengaluru even though there is a hike in numbers," he said.

The CM added, "There is no need to worry as all measures are being taken to prevent further spread of the pandemic."

As Bengaluru faces a bed crunch, the in-house software development team of the Karnataka Covid-19 War Room has been tasked with developing an application that will help patients in getting a hospital bed with as much ease as getting as a cab.

The Karnataka government Saturday issued an order reimposing lockdown on Sundays and extending the timings of night curfew, in a bid to contain the rise in cases of Covid-19 in the state.

The government has also revised its Standard Operating Procedures (SOPs) applicable to those entering Karnataka from other states — as domestic travellers were found to be among the main infectors by the State Department of Health and Family Welfare Services.

"The machines loaded on a truck will move around the city carrying disinfectants mixed in a large water tank. These mist cannons will spray disinfectants which will be dispersed through the air with particles of about 20-50 micron size (equivalent to size of dust particles)," a BBMP official explained.

The official added that such particles would settle to the ground faster like dust particles.

The machines were flagged off at Vidhana Soudha by Bengaluru's COVID-19 in-charge minister R Ashoka, Mayor Goutham Kumar, BBMP Commissioner B H Anil Kumar, and others.

On the morning of June 17, 2009, Anitha Mulya, a 22-year-old who rolled beedis for a living at her home in Barimar village in Bantwal taluk, went missing. For two days, her family and neighbours combed through the village looking for her, but with no luck.

Mohan Kumar, a former primary school teacher from Dakshina Kannada whose transformation into Karnataka’s dreaded serial killer has baffled many for years. On October 21, 2009, Kumar was arrested by the police from a village on the outskirts of Mangaluru and, during interrogation, he admitted to killing Anitha and at least 19 other women between 2004 and 2009 by poisoning them with cyanide. He also confessed to befriending them with the offer of marriage and then stealing their jewellery after killing them.

On June 24 this year, Kumar was convicted and sentenced to life by a trial court in Mangaluru in the 20th murder case registered against him. In five earlier cases against him, Kumar has been handed down the death sentence by the trial court, one of which has been upheld and two others commuted to life by a bench of the Karnataka High Court. Barring five cases, he was found guilty in all.

It can be recalled that the State had requested the Center to provide 30,000 ventilators for the same.

"Karnataka will be receiving 1200 of the 30,000 ventilators being manufactured in Bengaluru through a @skanray1 and @cmdbel partnership," Ashwathnarayan tweeted.

Karnataka: Most cases among people aged 20 to 40

As the total Covid-19 tally in Karnataka is 13,190 as on Sunday, people most infected by the pandemic in the state are of the age group 20-40 years.

Meanwhile, out of the total 4040 cases recorded in the last 7 days, the source of infection is termed "Other" on the portal and "Contact under tracing" in the daily bulletin released by the Health Department. 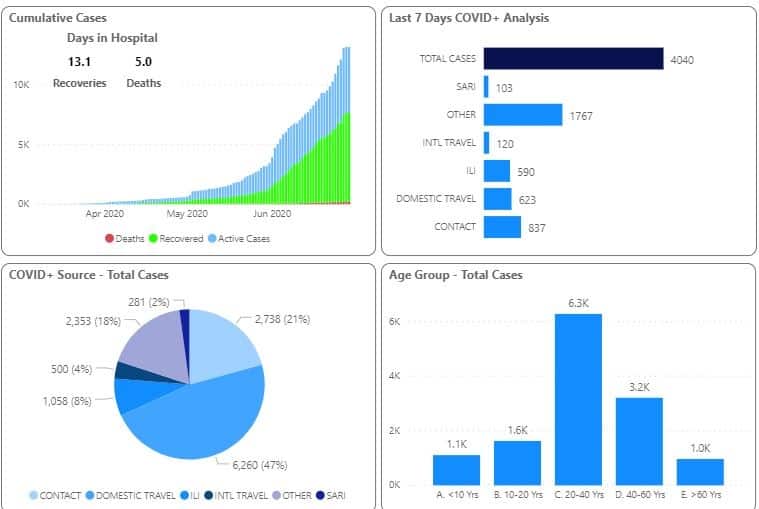 SSLC results to be announced in first week of August

Hotels to offer only take-away after 8 pm

He added, "Dine-in facilities will not be available in hotels in Bengaluru on Sundays from July 5 in the wake of the Sunday curfew in place. Consumers can avail parcel services or order food online."

Karnataka Education Minister S Suresh Kumar announced that the decision to re-open schools will be taken after July 5. "Parents have asked us to re-open schools after August or September. No online classes will be conducted for LKG and UKG students, schools should interact with students on phone twice a week", he said.

The minister added that for Classes 1 to 10, the Centre had laid down guidelines. "Based on the guidelines and what we have done in the past, we have formed an expert committee. Once the committee submits its recommendations, we will decide the next course of action", he said.

The protest was led by former CM Siddaramaiah, KPCC President D K Shivakumar, Working President Salim Ahmed, and former MP B K Hariprasad among others, as they cycled with party workers to the office as part of the protest.

"Congress demands an answer to unfair hikes on petrol and diesel price by the BJP governmemt," Shivakumar tweeted soon after the protest, sharing photos and videos of the same.

Congress demands an answer to unfair hikes on petrol & diesel price by the BJP govt.

When asked why a ‘safer’ form of protest wasn’t arranged, a local Cong leader told Indianexpress.com, “When the CM and his people can continue their publicity events even amid Covid-19, why can’t we protest for legitimate concerns affecting lives of crores of people?”

A 10-year-old differently-abled girl from Udupi, Karnataka is winning praise online after she stitched masks and distributed it to SSLC students appearing for their school-leaving exams.

Sindhuri, a grade six student of Mount Rosary English Medium School, was born without fully developed left arm. However, the 10-year-old managed to stitch around 15 masks which were distributed to the students.

Many appreciated Sindhuri for her kind-hearted gesture during the pandemic.

Spike in Karnataka could be due to closed labs

Karnataka reported an unusually high number of new cases on Saturday, more than double the number of its previous highest single-day figure, as almost 20,000 new cases were discovered across the country.

In the last one week, there has been a rise in the number of cases in Karnataka, mainly in Bengaluru, and the daily detections had increased from the level of 150-200 every day to between 300 and 400. On Thursday and Friday, it had reported close to 450 cases each. On Saturday, the state reported as many as 918 new cases, 596 of which came from Bengaluru alone.

It was not immediately clear, but the unusual surge could be the result of clearing of some backlog, which has been piling up in the state. Results of more than 11,500 samples are awaited as two key government laboratories had to close down after employees tested positive. The state is likely to report high numbers for the next few days, as the pendency is cleared.

A video of a group of men showing great determination and courage in rescuing a goat that fell into a ditch is going viral on the internet. The old video resurfaced online after Additional Director General of Police (ADGP), Assam Police, Hardi Singh shared it on Twitter.

The video shows a group of men rescuing a goat that had fallen into a deep ditch in a farm. “Desi style rescue!. Grit, determination, teamwork and courage. Smiling face with smiling eyes. Pls see till the end,” Singh captioned the video.

Karnataka State Road Transport Corporation (KSRTC) has scaled down operations of AC bus services owing to poor response from passengers after services resumed on June 25. Following a spike in cases in Bengaluru, KSRTC has brought down the number of AC buses being operated to six. Even non-AC buses have witnessed a drop in passenger footfall.

Noted Kannada novelist, Geetha Nagabhushan passed away on Sunday following a cardiac arrest. She was 78. Renowned for her works on resisting patriarchy and gender stereotypes which include 50 short stories, 27 novels, 12 plays, two collections of poems and research papers, Nagabhushan was the first woman writer to be awarded the Kendra Sahitya Academy award and Nadoja award. She had also served as the chairperson of the Karnataka Sahitya Academy.

As Karnataka revised its quarantine rules for inter-state returnees yet again, the 3-day institutional quarantine (IQ) which was mandatory for returnees from Delhi and Tamil Nadu has been waived off.

However, the 7-day mandatory IQ will continue for Maharashtra returnees followed by another week of home quarantine.

"Persons coming from states other than Maharashtra shall be placed in 14-day home quarantine," N Manjunatha Prasad, Principal Secretary, Revenue Department confirmed in an order issued on Sunday.

With police officers including Deputy Commissioners of Police (DCPs) in the city and BBMP officials including marshals stepping up enforcement of rules demanding people to wear masks and to maintain social distancing, people in the city are now closely watched, as claimed by City Police Commissioner Bhaskar Rao.

In a tweet, Rao warned violators to criminal cases being charged, if found not adhering to the rules.

"DCPs n BBMP are on streets to enforce wearing of mask and SD. Warnings now,criminal cases will follow.Urge every Bangalurean to enforce mask enforcement and SD. If people argue call 100, we are ready to respond to your calls. RWA n Traders Please Donate Masks to underprivileged," he tweeted.

Meanwhile, BBMP marshals — as on Sunday — collected over Rs 4.7 lakh from people not wearing masks in the city while another Rs 32,200 was levied as fine from those not maintaining social distance. 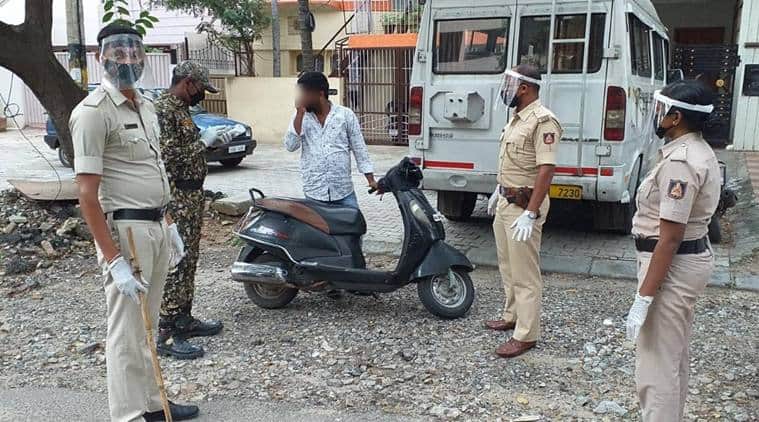 The average recovery period observed in the state is about 17 days. Express photo

Meanwhile, Karnataka reported an unusually high number of new cases on Saturday, more than double the number of its previous highest single-day figure, as almost 20,000 new cases were discovered across the country.

Read | India coronavirus numbers explained: Karnataka spike could be because of closed labs

At the same time, 99-year-old woman in Karnataka became the oldest in the state to defeat Covid-19, nine days after she tested positive for the virus. The average recovery period observed in the state is about 17 days.