Karnataka Bandh Today HIGHLIGHTS: Pro-Kannada organisations are demanding an increase in the reservation of jobs for Kannadigas in both government and private sectors. 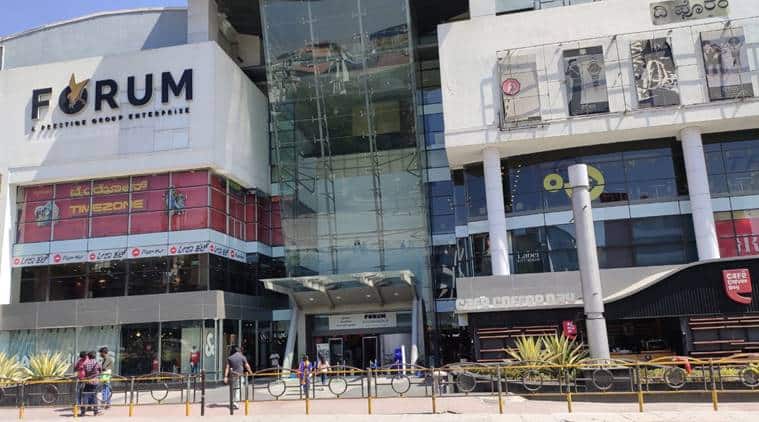 Karnataka Bandh Today HIGHLIGHTS: The 12-hour Karnataka bandh call by several pro-Kannada organisations, under the banner of Karnataka Sanghatanegala Okkoota, turned out to be a damp squib on Thursday as buses and autos plied as usual in Bengaluru and other parts of the state amid stray law and order incidents.

Activists made rounds in some areas in Bengaluru, appealing to traders to shut their shops in their support. In Anekal, near Attibele in the city on Karnataka-Tamil Nadu border, activists reportedly tried to shut shops and business establishments forcibly, PTI reported. At Pirangipet in Bantwal in Dakshina Kannada district, stones were pelted at a private bus in the morning.

Bangalore University has postponed all postgraduate (PG) exams scheduled for today. A pro-Kannada activist, Praveen Shetty, was kept under house arrest and police have detained a few people, including those involved in Cauvery protests and other bandh cases.

Karnataka Chief Minister B S Yediyurappa said after holding a meeting with the protesters, a conclusion will be drawn on the implementation of the Sarojini Mahishi report will be taken

'We will hold a meeting with the protesters and then a final call will be taken on the matter,' he said in Bengaluru.

Earlier today, representatives of several pro-Kannada groups had met the CM urging him to address their demands.

Meanwhile, the bandh call has led to a spat between BJP and Congress. With Congress leader Siddaramaiah extending full support to the pro-Kannada activists, Yediyurappa wanted to know what the party did while in power. "I don't want to speak about others. I want to ask - Congress was in power right. What did they do? They are giving support to (agitation or bandh) while in opposition, what did they do while in power for five years?" PTI quoted Yediyurappa as saying.

Karnataka bandh: What is the Sarojini Mahishi report at the centre of today's strike

Here is a short brief on the 1984 Sarojini Mahishi report which is at the centre of the Karnataka bandh today.

The Mahishi Committee, constituted in 1984 under former union minister Sarojini Bindurao Mahishi, recommended that a certain share of jobs in Karnataka should be reserved for Kannadigas in the public sector undertakings, private companies, and multinational companies. The report, which included job reservation recommendations, was in favour of 100 per cent reservation for Kannadigas across all public sector units and PSUs run by the state government. In addition, it recommended 100 per cent reservation for Kannadigas in Group-C and Group-D jobs in Central government departments and PSUs operating in the state as well. READ MORE

The Karnataka bandh called by pro-Kannada activists has been largely peaceful so far except reports of skirmishes in some areas. Activists made rounds in some areas in Bengaluru, appealing to traders to shut their shops in their support. In Anekal, near Attibele in the city on Karnataka-Tamil Nadu border, activists reportedly tried to shut shops and business establishments forcibly, PTI reported. At Pirangipet in Bantwal in Dakshina Kannada district, stones were pelted at a private bus in the morning.

Chief Minister Yediyurappa met pro-Kannada activists today in Bengaluru. During the meeting, the activists submitted a memorandum to him. "Government always stood for Kannada and Kannadigas and initiated measures to implement the Sarojini Mahishi report,” Yediyurappa said.

Karnataka bandh: No response to strike in South and East Bengaluru.

It seems the bandh call is turning out to be a damp squib, at least in Bengaluru!

There has been no response to the bandh called by several pro-Kannada outfits in South and East Bengaluru. Autorickshaws, cabs and all commercial establishments, including malls, remain open. Normal life is also unaffected in Hubballi, Dharwad, Kalaburagi, Belagavi and other parts of the north Karnataka.

Bangalore University has postponed all post-graduate examinations scheduled for today in the view of Karnataka bandh called by pro-Kannada activists. The Karnataka government on Wednesday announced that schools and colleges would function as usual across all districts. "There will be no holiday on Thursday. I hope and urge all organisations taking part in the bandh to will hold it peacefully," Primary and Secondary Education Minister S Suresh Kumar said.

As a precautionary measure, Bengaluru North Division police personnel had started patrolling duties from 4 am in view of the Karnataka bandh. They have already detained a few people, including history sheeters and those involved in Cauvery protests and other bandh cases. Earlier in the day, a pro-Kannada activist, Praveen Shetty, was kept under house arrest.

Karnataka Chief Minister BS Yediyurappa appeals to pro-Kannada outfits leading the strike to not cause inconvenience to the general public and keep their agitation peaceful. "Government always stood for Kannada and Kannadigas and initiated measures to implement the Sarojini Mahishi report," says Yediyurappa.

To check any untoward incident, around 400 policemen have been deployed in and around KSR Bengaluru railway station, one of the busiest areas in the city. The police have been directed to be on high alert. Meanwhile, Bengaluru International Airport has issued an advisory and asked passengers to plan their journey accordingly as most Ola, Uber cabs, other taxi operators and autorickshaws are off the roads. 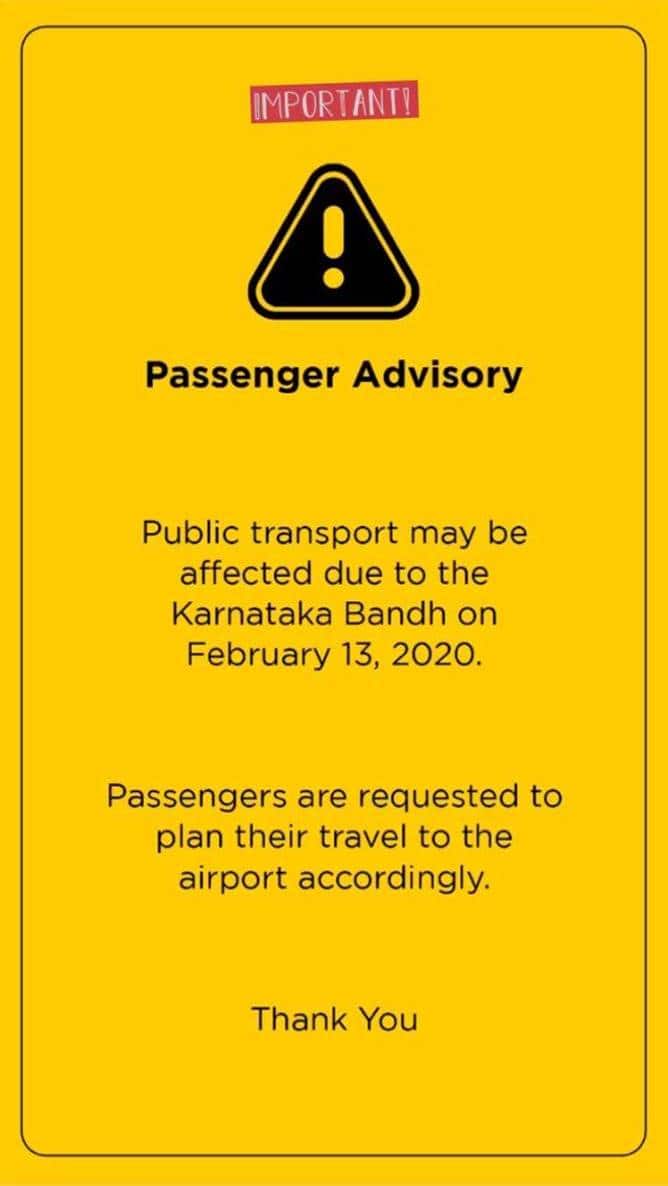 Here is some latest news coming from Bengaluru. Pro-Kannada activist Praveen Shetty has been kept under house arrest and police personnel have been deployed in front of his house in RT Nagar. Besides pro-Kannada organisations under the banner of Karnataka Sanghatanegala Okkoota, others who have extended their support to the bandh include the Centre of Indian Trade Unions (CITU), Karnataka Film Chamber of Commerce (KFCC), and the lorry owners association.

Karnataka bandh: Here is why Kannada outfits have called for the strike

So, why are the pro-Kannada outfits protesting? The organisations are demanding an increase in reservation of jobs for Kannadigas in both government and private sectors according to the Sarojini Mahishi report, which was submitted in 1984 but is yet to be implemented. The Sarojini Mahishi report recommends a certain percentage of jobs to Kannadigas in public sector undertakings, private companies, and multinational companies.

Karnataka bandh: 12-hour bandh to be observed till 6 pm

Here is a reminder for our Bengaluru folks! The 12-hour bandh will be observed from 6 am to 6 pm. The bandh has been called by the "Karnataka Sanghatanegala Okkoota", an umbrella body of several pro-Kannada organisations. So far, there has been no reports of any violence. Earlier in the day, stones were pelted on a Tirupati-Mangaluru bus in Farangipet, ANI reported.

Meanwhile, in capital Bengaluru security has been beefed up. Two ACPs, five police inspectors, 15 sub-inspectors and 800 personnel deployed have been deployed. The state police force is on high alert with DG & IGP Praveen Sood instructing officers to maintain law and order to ensure that no untoward incident takes place.

As per the latest update, in the capital city Bengaluru, the bandh has hit daily commute for many as Ola, Uber cabs, and autorickshaws have stayed off the roads. However, buses are plying as usual. On Wednesday, state-run transport corporations, including the Karnataka State Road Transport Corporation (KSRTC) and the Bangalore Metropolitan Transport Corporation (BMTC), had said their services would continue as normal.

Welcome to our live blog. With several pro-Kannada outfits calling for a Karnataka bandh today, normal life is likely to be disrupted partially today. While  Ola, Uber Drivers and Owners Association have extended support to the bandh, the Karnataka State Road Transport Corporation said buses would ply as usual. For the latest traffic updates and likely road diversions, keep a tab on our live blog. 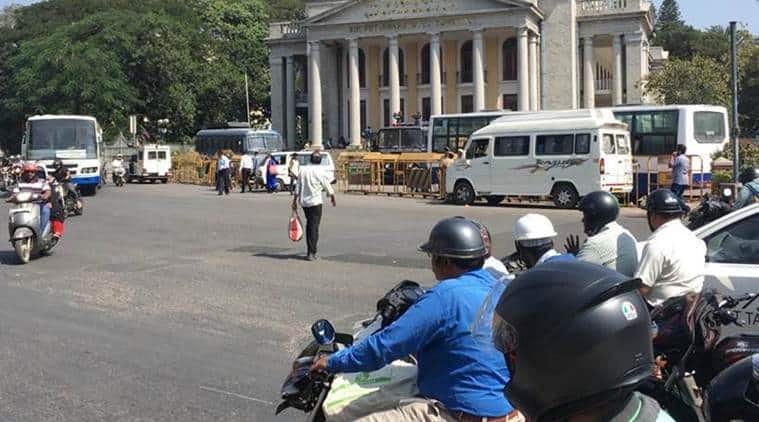 Karnataka bandh today LIVE Updates: Autos and cabs will not be available from 6 am to 6 pm in Bengaluru. (File Photo)

The Ramakrishna Hegde government had appointed Sarojini Mahishi, a four-time Member of Parliament and senior Janatha party leader, to head the committee in 1983. The panel had recommended job quota for Kannadigas in public sector undertakings, private firms and multinational companies.

It said officers in all industrial units in the state should invariably be Kannadiga, and all jobs in the private sector were reserved for Kannadigas barring, if necessary, senior/skilled positions.