Earlier in the day, Congress leaders, led by General Secretary K C Venugopal, were denied permission to visit D K Shivakumar who was then admitted to Ram Manohar Lohia Hospital in Delhi. Congress leaders have called his arrest as ‘political vendetta’ by the BJP-led central government. Meanwhile, supporters of Shivakumar burned KSRTC buses in Kanakapura of Ramanagara district Wednesday morning to mark their protest against his arrest. Crowds shouting slogans blocked the main roads in Chennapattna, Kanakapura and burned tires. As a precautionary measure, the district administration has declared holiday in schools and colleges on Wednesday.

The state Congress has called for a state-wide bandh following Shivakumar’s arrest in the money laundering case. The case registered by the ED last year is the fall out of an investigation carried out by the income tax department against Shivakumar in 2017 where Rs 8.83 crore in unaccounted cash was found in New Delhi in locations linked to the Congress leader. The ED had in September last year registered the money laundering case against Shivakumar and others based on a chargesheet (prosecution complaint) filed by the Income Tax Department in a court here for alleged tax evasion and hawala transactions worth crores.

Congress minister D K Shivakumar was arrested by the ED in connection with a money laundering case. The income tax department carried out searches in August 2017 in premises linked to Shivakumar. The case registered by ED last year is the fall out of an investigation carried out by the income tax department against Shivakumar in 2017 where Rs 8.83 crore in unaccounted cash was found in New Delhi in locations linked to the Congress. Read more here

Political vendetta has become stronger than law in this country: DK Shivakumar

Allegations made against accused are serious in nature: Special judge rules on DKS

"The allegations made against the accused are serious in nature. The investigation in my considered view would justify the custodial interrogation of the accused keeping in view the nature of the offence," Special judge Ajay Kumar Kuhar said.

"He has to be confronted with voluminous incriminating material and other crucial aspects of the case with regard to the source of the money and his further interest in the other properties and accounts. Therefore, I consider it to be a fit case for grant of custody of the accused to Enforcement Directorate," the judge added. (PTI)

'Political vendetta has become more stronger than the law in this country: DK Shivakumar tweets

While in detention, DK Shivakumar tweeted a video of himself saying, "Political vendetta has become more stronger than the law in this country."

Political Vendetta has become more stronger than the law in this country pic.twitter.com/Ylo7QhBkKn

Several Youth Congress workers were detained in New Delhi Wednesday following a scuffle with police personnel during a protest against the arrest of the party's Karnataka leader D K Shivakumar. The protesters raised slogans against the government and burnt effigies of Prime Minister Narendra Modi and Home Minister Amit Shah outside the Indian Youth Congress' office in central Delhi. While police barricaded the road leading to Parliament, a number of protesters tried to break through and jostled with police personnel.

"A number of protesters were detained, forced into two buses and taken to Parliament Street and Mandir Marg police stations," Youth Congress' media in-charge Amrish Ranjan Pandey said. He claimed that some of the protesters were injured in police lathicharge and were hospitalised. A senior police official, however, said 66 protesters have been detained but there was no use of force against them. (PTI)

Remand is a rare exception, can't be granted in mechanical manner; ED's plea for custodial interrogation is perverse. Shivakumar has not been given food today, seems it is "slow torture" by ED: Advocate Abhishek Manu Singhvi tells court (PTI)

Advocate Abhishek Manu Singhvi appearing for Shivakumar moves for his bail application and tells the court that the Congress leader had already been quizzed for 33 hours and that he is not a flight risk. Singhvi said unless the probe agency shows something startling has happened, Shivakumar can't be sent to its custody as he never absconded.

The arrest of DK Shivakumar is another example of the vendetta politics unleashed by the Govt, using agencies like the ED/CBI & a pliant media to selectively target individuals.

Custodial interrogation of Shivakumar necessary as some facts are in his personal knowledge; he tried to misguide probe. Shivakumar is evasive, non-cooperative during probe; there was phenomenal growth in his income when he was in important position. Shivakumar is to be confronted with voluminous documents and custody is needed to unearth illegal properties, ED to court. 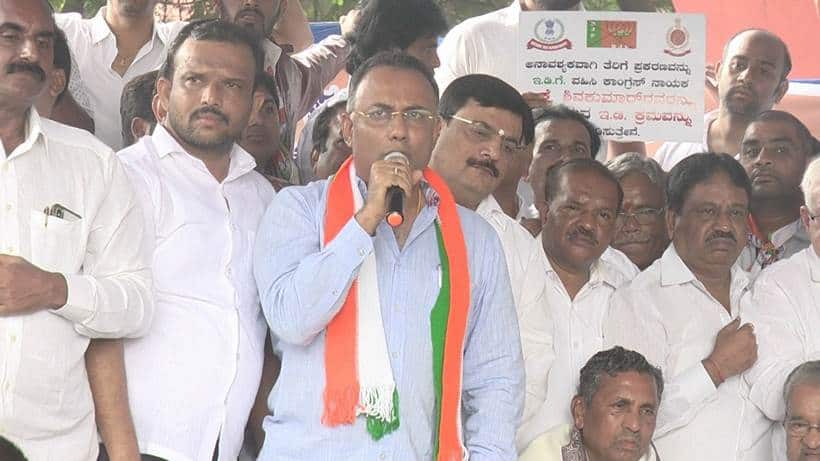 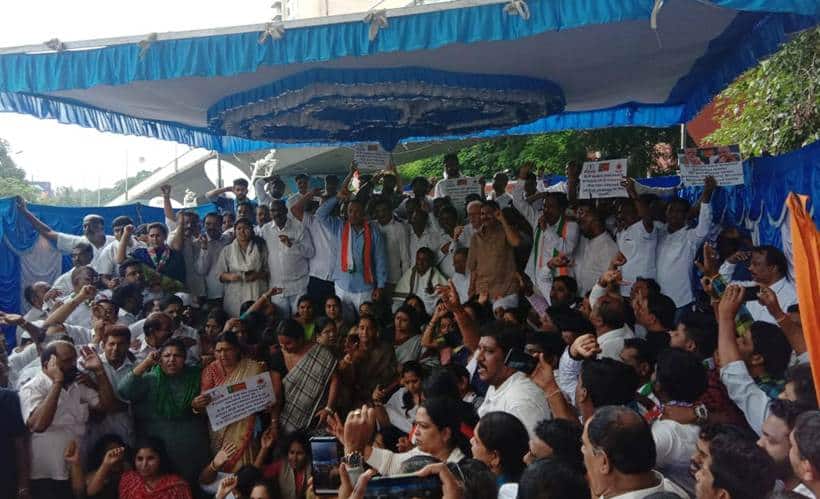 As the Congress staged protests in several parts of Karnataka following the arrest of senior party leader D K Shivakumar by the ED, state Home Minister Basavaraj Bommai appealed for "peace". The Minister has also instructed officials to take all necessary steps to maintain law and order.

At several places in the state protests and incidences of burning tires, stone pelting and torching of buses have been reported since last night, Bommai said adding officials are on the job to maintain peace. "They (Congress) can protest peacefully. Maintaining law and order is the duty of the government. Congress was part of the government that just exited office, we expect them to maintain peace," he said.

"It is the duty of Congress leaders to see to that the peace is not disturbed and public property is not destroyed. So I request everyone to maintain peace and help in maintaining law and order. We have to see to that public at large are not affected, and there should be no room for any violence," he told reporters. (PTI)

Parts of Karnataka witnessed intense protests on Wednesday, a day after Congress troubleshooter and former Karnataka Minister D K Shivakumar was arrested by the Enforcement Directorate (ED) in connection with a money laundering case. While violent protests rocked the outskirts of Bengaluru in places like Kanakapura and Ramnagara, the capital city remained largely calm, with schools and colleges open and offices functioning normally. Read more

The BJP on Wednesday said investigating agencies have "strong evidence" against former Karnataka Minister D K Shivakumar and rejeced the Congress charge of "political vendetta" behind his arrest.

It has now become fashionable for the Congress leaders to claim vendetta even when specific allegations or specific charges of financial misdemeanor, money laundering and all such financial crimes come to the fore, BJP national spokesperson G V L Narasimha Rao told PTI.

Miscreants stoned and damaged bus in protest against the arrest of Congress legislator D K Shivakumar by the Enforcement Directorate (ED) in New Delhi. 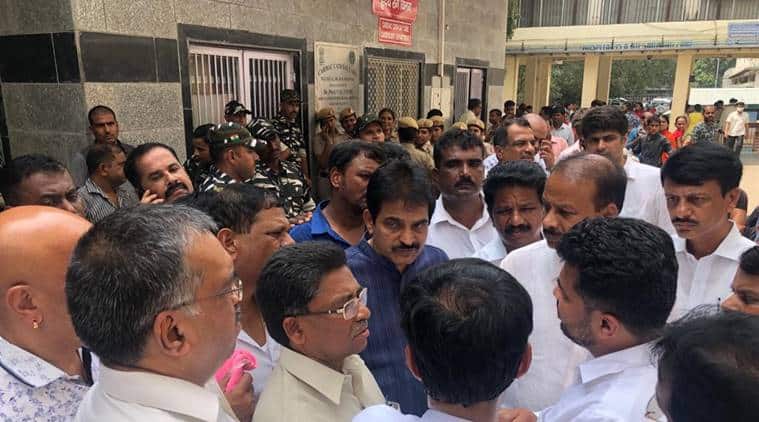 In Pics | Congress workers protest next to Gandhi statue in Bengaluru Senior Congress leader Mallikarjun Kharge Wednesday said the arrest of D K Shivakumar by the Enforcement Directorate (ED) is intended to demoralise him and party workers. "As per rules whenever the Income Tax Department and ED called, he responded. He is cooperating. Is he absconding? Why are they doing this? Just to harass and mentally torture him. I condemn this," ANI quoted him as saying.

After being detained in the morning, Congress leader D K Shivakumar was released from police custody in the evening and sent to Bangalore. (Express photo by Prashant Nadkar)

Following the Congress leader's arrest, stones were pelted on 5 KSRTC buses in Satanur, the native place of Shivakumar, and in Channapatana and Ramanagara. Three buses from Kanakapura depot and 1 from Channapatna depot were vandalised by stone pelters.

Protests across #Karnataka intensify after the arrest of former minister and senior @INCKarnataka leader #DKShivakumar. Stone pelting on 5 KSRTC buses in Satanur, 2 buses from Kanakapura depot and 1 bus each from Channapatna and Malavalli depots. @IndianExpress pic.twitter.com/sahypCu5Vy

Protests intensified across Karnataka condemning the arrest of the seven-time legislator and former Energy, Water Resources Minister. On Tuesday, effigies of BJP leaders were also burnt in Ramanagara as part of intense protests across major roads and key areas of the town.

Karnataka State Road Transport Corporation (KSRTC) PRO said that they are monitoring the situation. "We are monitoring situation, directed divisional officers to take action of services suspension based on local situation. Control rooms have been activated and divisional officers have been asked to act suitably," he told indianexpress.com. Mysore, Mandya, Chamarajanagar, Bengaluru Rural IGPs have also been alerted for precautionary measures.

Meanwhile, former Karnataka Chief Minister HD Kumaraswamy reacted over Shivakumar's arrest and said, "We were expecting this for the last 7-8 months. The Central government is misusing their offices to suppress the leaders of the opposition."

"He (@DKShivakumar) has been cooperating with ED/IT officials for all inquiries till date on his business transactions even until today. Why is it necessary to keep him in custody for more days even then," he added.

Karnakata Chief Minister BS BS Yediyurappa also reacted over the Congress leader's arrest: "It’s not that I’m happy with his arrest. I pray to God that @DKShivakumar should come out of all this."

“In my life, neither have I hated anyone nor wished for something bad to happen to someone. Law will take its own course in such cases," he said.