As cops rushed to bring the situation under control, hundreds more gathered and marched to DJ Halli police station, setting some vehicles on fire. 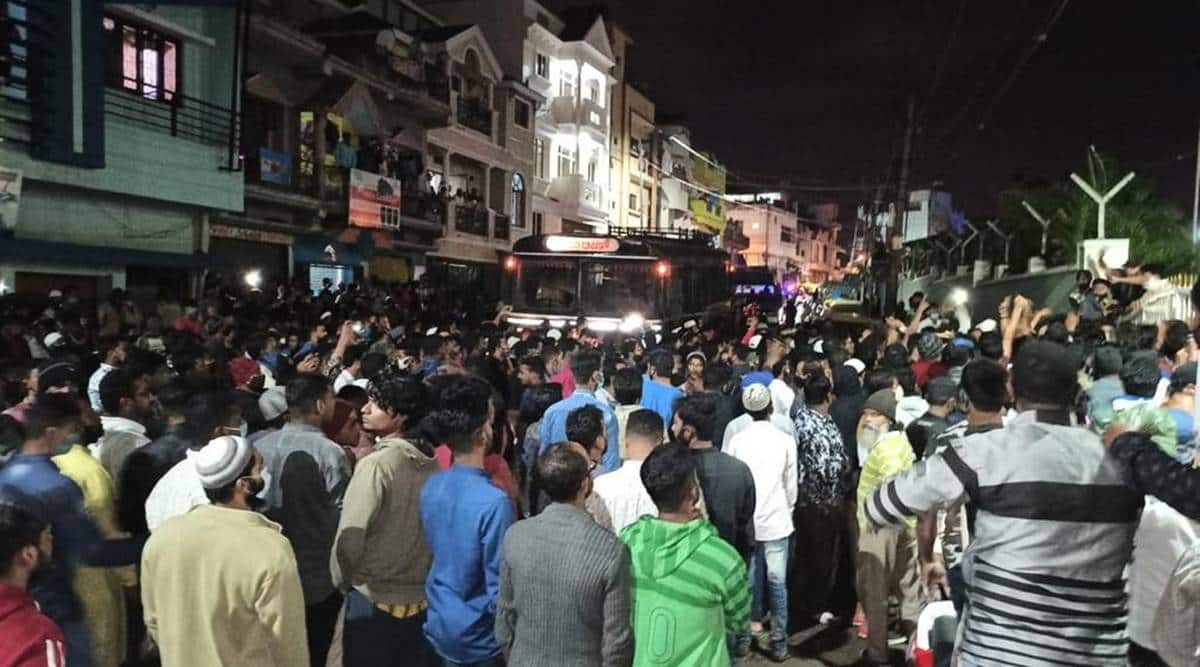 On Tuesday, a mob attacked the house of Pulakeshinagar MLA Akhanda Srinivas Murthy over an alleged derogatory Facebook post by his nephew. (Express Photo)

A mob gathered outside the residence of a legislator in northeast Bengaluru late Tuesday, pelting stones and setting ablaze some vehicles, allegedly because they were irked by a derogatory social media post shared by the MLA’s relative.

The incident took place at Kaval Byrasandra in Bengaluru, outside Pulkeshinagar Congress MLA R Akhanda Srinivas Murthy’s house. The mob alleged that a Facebook post by the MLA’s relative was offensive to Islam and its beliefs.

Following the incident, as police rushed to bring the situation under control, hundreds more gathered and marched to DJ Halli police station, setting vehicles outside the police station on fire, and chanting slogans demanding an FIR and immediate arrest of the perpetrator.

Sources close to Srinivas Murthy said he was not at home when the incident took place. Minutes later, the legislator shared a video on social media, requesting people to maintain peace and harmony.

“I’m making a request to my Muslim brethren. There is no need to be violent. I will ensure that proper legal action is initiated against the perpetrators. I request you to maintain peace and harmony and I will be with you for this,” he said.

Karnataka home minister Basavaraj Bommai said strict action would be taken against the guilty, but no one should indulge in vandalism. “We will investigate the matter thoroughly, whatever the situation is. However, indulging in vandalism is not the solution. Additional forces have been deployed and the cops have been given a free hand to handle the situation,” he said.

“No matter how powerful the perpetrators are, strict legal action will be taken against them. But citizens should refrain from taking the law into their hands,” the minister added.

Bengaluru City Police confirmed that cops at the site used lathicharge, tear gas, and bullets to bring the situation under control. “Unfortunate incidents took place within the limits of DJ Halli and KG Halli police stations. The police have resorted to lathicharge, tear gas and bullets to keep the situation under control,” a police statement said.

Hours after the incident, Bengaluru City Police Commissioner Kamal Pant said “the situation is under control.” “The mob started creating ruckus and unrest, initially in small groups, around 8 pm. The situation worsened as more people started arriving,” he said.

Chamrajpet MLA B Z Zameer Ahmed Khan, who rushed to pacify the protesters outside the police station, assured them a complaint would be lodged soon.

Minutes later, Mufti PM Muzammil of Jamiat Ulama-I-Hind, a religious leader, addressed the protesters, asking them to refrain from violence. “The FIR has been lodged and the police will arrest him (the perpetrator) tomorrow. He will be punished. It is my request that all of you should keep your emotions under control,” he said.

“FIR is lodged and police will arrest him (the perpetrator) tomorrow. He will be punished. It is my request that all of you should keep your emotions under control,” appeals Mufti PM Muzammil Sab of Jamiat Ulama-I-Hind, a religious leader in #Bengaluru. @IndianExpress pic.twitter.com/uxV1A7pgul

The police, however, are yet to confirm if the FIR has been registered.

Reacting to the incident, Gandhinagar MLA Dinesh Gundu Rao urged the government to handle the situation firmly. “I urge all the people to maintain calm, and the government to handle this delicate situation firmly but surely, and not play politics,” he tweeted. “I also see a conspiracy in the way the Facebook post has been put out & looks to have been done to incite disturbance,” he added.

Shivajinagar MLA Rizwan Arshad also condemned the situation. “People who put up the derogatory post and those who took the law into their hands have done great harm to the existing peace and loving environment we have in Bengaluru,” he said, appealing for peace.

Notebandi to Article 370 to Mandir: People must begin all over again, PM Modi will write their destinies afresh