According to reports, attempts were made to dissuade a turbaned Sikh girl from attending classes at Mount Carmel College, a private-minority institution in Bengaluru, this week reportedly at the instance of the Karnataka Pre-University Education Department officials. She, however, was not stopped from attending classes. 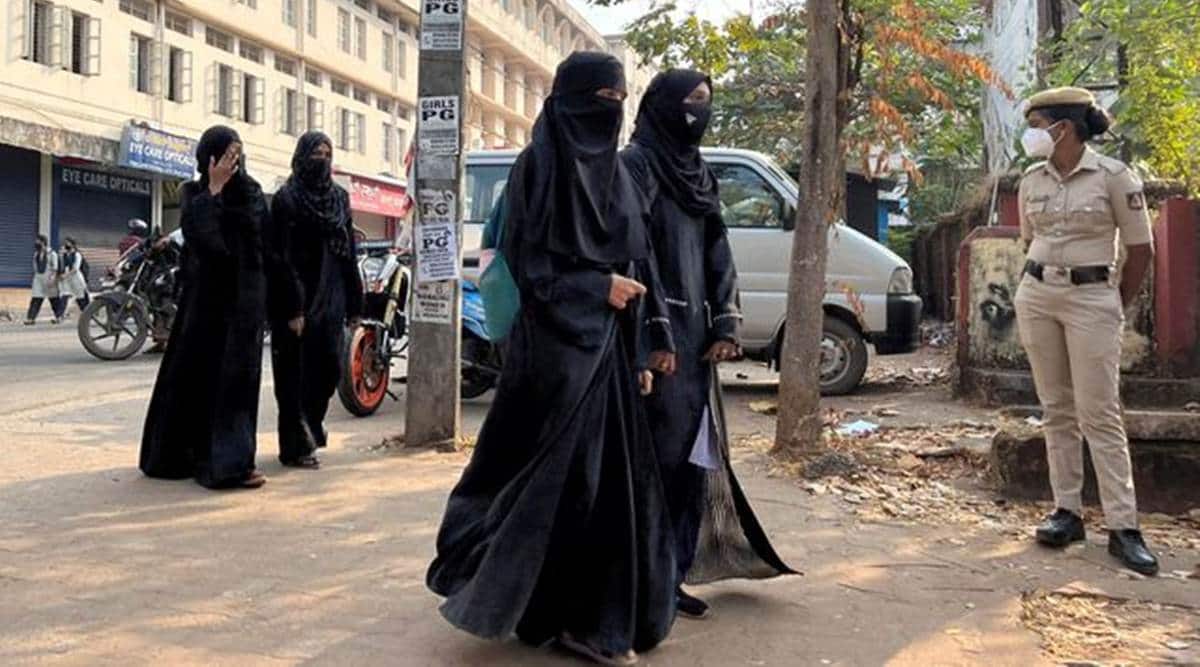 Students in hijab outside a school in Udupi. (Reuters/File)

DESPITE THE Karnataka Advocate General telling the High Court that the state government is not interfering with uniforms in private-minority institutions, the state education department officials have reportedly been doing the opposite.

According to reports, attempts were made to dissuade a turbaned Sikh girl from attending classes at Mount Carmel College, a private-minority institution in Bengaluru, this week reportedly at the instance of the Karnataka Pre-University Education Department officials. She, however, was not stopped from attending classes.

Deputy Director of the department in north Bengaluru G K Sriram said he was entrusted with the duty of convincing authorities at Mount Carmel College to enforce the ban on religious attire as prescribed by a February 10 High Court order. “The High Court order only says the order should be implemented in colleges where uniforms have been prescribed. The order is not clear on private-minority institutions specifically,” he said.

Karnataka Advocate General Prabhuling Navadgi had, however, informed Chief Justice Ritu Raj Awasthi on February 22 that the state was not interfering with uniform norms in private-minority educational institutions.

The declaration by the AG was used by the High Court to dispose of a petition filed by Karnataka State Minorities Educational Institutions Managements’ Federation that had questioned the applicability of restrictions on religious attire. “We are of the considered view that nothing is required to be adjudicated in the matter. The writ petition is accordingly disposed of,” the court had said.

“We think the High Court order applies to all institutions. The order says do not allow headscarves in classrooms in colleges that have uniforms. This college (Mount Carmel) has a uniform,” Sriram said.

“We are not conducting any inspections but if someone points it out (religious attire) then we go to the college. We have to ensure no religious attire is worn in classrooms. People complain out of precaution to prevent students from indulging in a competitive display of religious attire,” an education official said.

However, Muslim girls have even been kept out of the classrooms in degree colleges where there is no dress code, a move that goes against the High Court order. Even Muslim teachers were forced to remove hijab and burqa at some places.

On February 15, advocate Mohammed Tahir, who has been representing Muslim students on the hijab issue in the High Court, sought a clarification on the February 10 order from the court. “The order passed by the High Court has been grossly misused. They are using this order in every institution. Muslim girls are being forced to remove their hijab,” he told the court.

On February 23, in an oral clarification of its February 10 order, the High Court said that restrictions on wearing religious attire would apply only to state colleges where uniforms are prescribed. No written clarification was issued in this regard. The High Court also clarified, orally again, that its February 10 order would apply only to students and not teachers.

An official on condition of anonymity said the government’s February 5 order banning hijab and leaving it to the discretion of college development committees that prescribe dress code was the root cause behind the issue getting out of hand.