Covid-19 Bengaluru status check: Half of Karnataka’s coronavirus cases, deaths are from the capital

According to data shared by the Karnataka Department of Health and Family Welfare Services, Bengaluru (both Urban and Rural districts) alone has reported over half (50.69 per cent) of the total cases confirmed in the state, which consists of 30 districts. 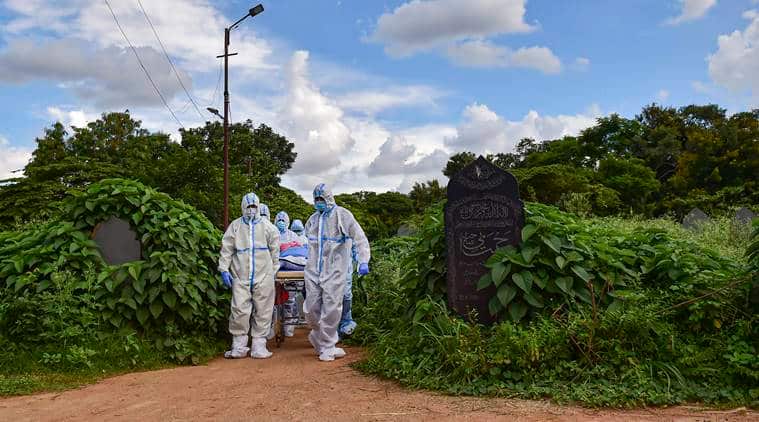 As Karnataka continues to report the highest percentage of daily growth rate in the country, capital city Bengaluru remains the biggest contributor to the state’s covid tally.

According to data shared by the Karnataka Department of Health and Family Welfare Services, Bengaluru (both Urban and Rural districts) alone has reported over half (50.69 per cent) of the total cases confirmed in the state, which consists of 30 districts.

The trend is no different in terms of fatalities linked to the pandemic. As many as 638 out of the total 1,240 (51.45 per cent) Covid-19 deaths in Karnataka are from Bengaluru alone.

Out of the total 198 wards in Bengaluru, all but two—Aramane Nagar (Ward 35) and Rajagopal Nagar (Ward 70)—have reported at least 50 positive cases each. The South Zone is the worst hit till date across the eight zones demarcated by the city’s local civic body, Bruhat Bengaluru Mahanagara Palike (BBMP). As per an analysis by the BBMP Covid-19 war room, 26 per cent of the cases in the city were reported from the South Zone alone in the last 10 days. It accounts for 23 per cent of the cumulative covid-19 positive cases in the city. 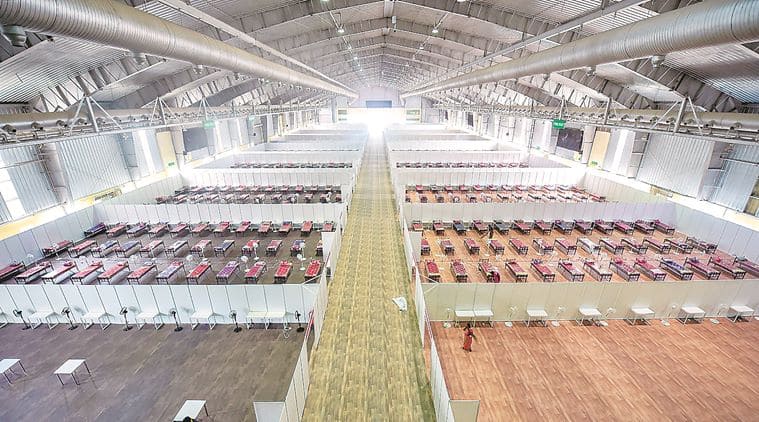 A 10,000-bed Covid-19 care centre that has come up at Bengaluru International Exhibition Centre. (Photo: PTI)

Meanwhile, as per the data shared by the BBMP, at least 448 cases have been reported from Shanatala Nagar ward, believed to be the new epicentre of coronavirus infections in the city.

The spread of infection in areas like Padrayanpura, Hongasandra, and Shivajinagar seem to be contained with the local civic body implementing strict containment measures since mid-June.

The ward, which falls under the Shantinagar constituency, is home to commercial areas like Brigade Road, Lavelle Road, Vittal Mallya Road, Victoria Layout and others

While over 8,600 beds have been allocated for symptomatic Covid-19 patients in the city—including government and private hospitals identified as ‘government quota’— over 38 per cent of them have been occupied as on Sunday, according to the BBMP portal.

Discrepancies like government hospitals admitting asymptomatic patients have also led to a crisis. Earlier this week, Medical Education Minister K Sudhakar was seen conducting surprise visits to hospitals, warning violators of strict action. During one such inspection visit, the Minister pulled up authorities of CV Raman General Hospital. As per the Standard Operating Procedure issued by the state government, asymptomatic patients were advised either to be in home quarantine or to be shifted to any Covid Care Centre.

“During my surprise visit to CV Raman General Hospital, Indiranagar I instructed doctors to ensure asymptomatic and mildly symptomatic patients are sent to Covid care centres,” he said.

The Minister also instructed the hospital authorities to equip high flow oxygen beds and ventilators in the ICUs immediately. Samples being collected in Bengaluru on Saturday. (Photo: PTI)

Further, with state-run hospitals under pressure to deal with the rising cases, the government has been reiterating its advisories and orders to private hospitals to open their doors to covid-19 patients.

On Saturday, Chief Minister B S Yediyurappa directed private hospitals and medical colleges in Bengaluru to provide 50 per cent of their beds as promised, with effect from Sunday.

“Private medical colleges and hospitals need to cooperate as there is a sharp rise in Covid-19 cases in the city. It has come to the notice of the Government that some institutes are denying treatment for COVID as well as non-COVID patients, and in this emergency situation we should respond with humanity,” he said addressing management representatives of private hospitals.

In addition to this, the government also appointed nodal officers to monitor the availability of beds in private medical colleges and hospitals.

The availability of ambulances is another issue the city faces at the moment. Several volunteers in the city, who are part of the Emergency Response Teams set up by NGOs groups, complained that there is no coordination with hospitals.

“While an ambulance is available within an average 30 to 45 minutes since a call to the 108 government helpline is made, the drivers are particular only for point-to-point services. This leaves the patients’ kin in a dilemma as it now requires each person to confirm bed availability in a hospital bed prior to booking the ambulance,” Ameen Mudassar of the Sigma foundation, who is part of one such Emergency Response Team in the city, said. Bengaluru: Beds are lined at a temporary COVID-19 care centre for the treatment of infected patients, at Bengaluru International Exhibition Centre (BIEC) in Bengaluru. (PTI Photo)

He attributed several deaths to non-availability of oxygen in ambulances and the delay in finding a hospital bed.

Another greivance of the volunteers is the lack of real-time data of beds. “The data submitted by private hospitals for government quota needs to be rechecked as we have found it faulty in most instances. While nodal officers have been appointed for the same, they are seen blindly forwarding underplayed numbers submitted by private hospitals to the government instead of physically verifying them,” another volunteer attached to a social media-based response team alleged.

Meanwhile, testing numbers continue to improve in the state since the visit of the Union Health Ministry team. Bengaluru so far has conducted the most number of tests since the pandemic began.

According to the BBMP bulletin, 14,929 tests were conducted on Saturday alone.