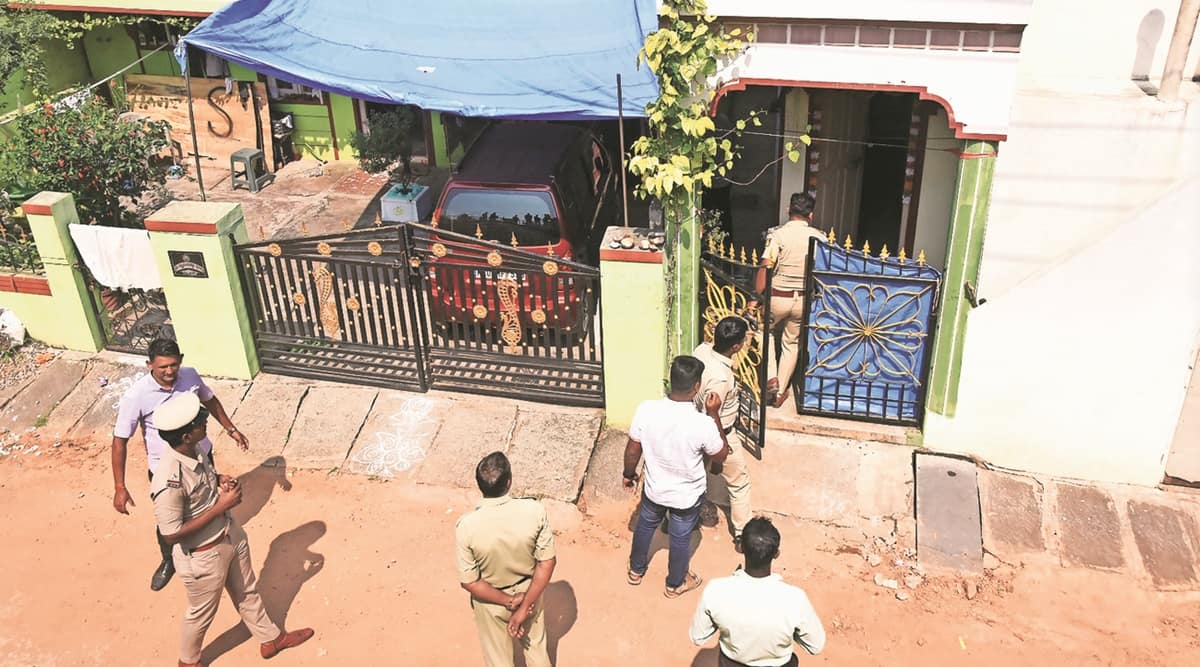 Three people who have been missing since 2020 in separate Islamic State-linked cases have been identified by Karnataka Police as the possible handlers and financiers of a 24-year-old youth who was carrying an IED that exploded in an autorickshaw in Mangaluru on November 19.

ADGP (Law and Order) Alok Kumar Monday named three people — Musabir Hussain, Abdul Matheen Taha and Arafath Ali, all former residents of Shivamogga — as the possible handlers and financiers of Mohammed Shariq, 24, a Shivamogga youth, who suffered burn injuries in the low-intensity blast. While Arafath Ali is a co-accused with Shariq in a case of painting provocative graffiti in Mangaluru in December 2020, the other two, Musabir Hussain and Matheen Taha, are accused in a case filed in Bengaluru in 2020 by the local police for the creation of an ISIS-inspired terrorist gang with members drawn from Kerala, Tamil Nadu and Karnataka. The case was later handed to the NIA.

“Arafath Ali is still absconding (in the graffiti case) and as per our information he is in Dubai. He was the immediate handler. Above him there was Abdul Matheen Taha — against whom NIA has announced a reward of Rs 5 lakh — who was the main handler. He was also in touch with one Musabir Hussain who is also a missing accused in a 2020 UAPA case,” the Karnataka ADGP said Monday.

Karnataka Police are looking at the sources of funding and motivation that drove Shariq into making an IED and transporting it to Mangaluru from Mysuru on November 19 for a suspected terror attack. “We do not know where he was taking the device and what he was planning since he is still hospitalised. He visited the city for a suspected recce on November 10 and went to a few crowded places,” ADGP Alok Kumar said. “There were also one or two local supporters involved and we are working on it,” he said.

The Karnataka ADGP said police are investigating Shariq’s use of cryptocurrencies for transactions and whether he was receiving funding for his activities through this route. He had fled Shivamogga in September over a police investigation of a terror plot — where two of his associates, Maaz Ahmed and Syed Yasin, were arrested. The investigations in Shivamogga in September had revealed that Shariq had allegedly sent money required to make a bomb to Yasin through cryptocurrency.

The police, meanwhile, have found a picture on Shariq’s mobile phone where he is posing like IS cadre with the suspected pressure cooker IED that exploded in Mangaluru on Saturday.

A police raid on the Mysuru house where Sharik is alleged to have constructed the IED between September 20 and November 19 — when he traveled to Mangaluru — unearthed a cache of explosives, including over 150 match-boxes. The phosphorus on the tips of match-sticks was stripped to increase the potency of primary explosive material (gunpowder or potassium nitrate) in the IED. Among other materials directly linking Shariq to fabrication of the IED that was found at the Mysuru rented house were 9 volt batteries, sizable quantities of phosphorus and sulphur, police said.