BBMP Chief Commissioner Gaurav Gupta said the BBMP has deployed several boats, besides SDRF and other teams, to provide emergency supplies to residents in the Kendriya Vihar apartment. 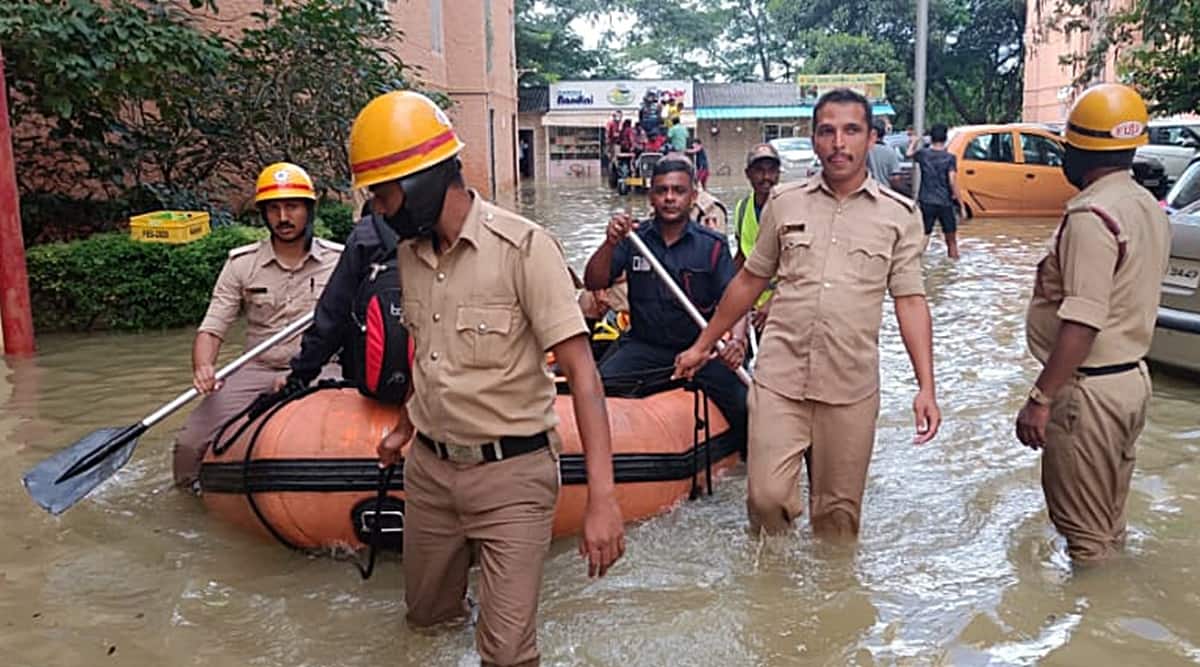 BBMP Chief Commissioner Gaurav Gupta said, “Kendriya Vihar apartment is in a low-lying area, next to Yelahanka Lake. We are now planning to construct a new 30-40 ft stormwater drain with RCC cement and concrete walls so that the water doesn’t flow into low-lying areas.”

#BengaluruRains: Bengaluru fire department @KarFireDept personnel have started rescue operations at Kendriya Vihar Apartment in Yelahanka North #Bengaluru on Monday. The basement of apartment and a few houses were flooded due to the overnight rains. @IndianExpress pic.twitter.com/NDizcwp4xJ

Gupta said the BBMP has deployed several boats, besides SDRF and other teams, to provide emergency supplies to residents in the apartment. The civic body has now arranged milk, biscuits, candles, bread and drinking water facilities for the residents.

“Around 2 am last night, about 130 mm rain was recorded in Yelahanka Zone and the Yelahanka lake overflowed, flooding Kendriya Vihar Apartments. The water level rose to a height of four feet,” he explained.

The apartment has 604 flats and 1,600 residents. Eighteen NDRF teams used boats and tractors to ferry the residents out of the apartment. “We have ensured that no one faces any difficulties. The Palike’s Revenue Department officials have reached out to the homes and assessed the damages caused,” Gupta added.

WATCH: The Bruhat #Bengaluru Mahanagara Palike (BBMP) has deployed boats and SDRF teams at Kendriya Vihar apartment in the Yelahanka zone in North Bengaluru to provide relief to the residents amid waterlogging due to the overnight rains. @IndianExpress pic.twitter.com/D5kAG7l3sF

Two hours of incessant rain flooded the entire basement of the apartment, said Chandrasekhar, a resident of the apartment. “Water is all over the apartment premises now, starting from the main gate. The BBMP officials are helping senior citizens and evacuating them to safer places,” he told The Indian Express.

A BBMP medical team with eight doctors has been stationed nearby. “A medical team, along with a basic life support ambulance, has been provided for the residents for medical emergencies. Residents can also use the ambulance to go to hospitals, if needed,” a BBMP senior official said.

A member of the rescue operation team from BBMP told The Indian Express that many are packing up and leaving. “Some people are evacuating their residences in the apartment, families are left with nothing. They had to pack whatever they had and leave,” he said. Residents complained that a few years ago, the apartment got flooded in a similar manner.

The waters here are currently being pumped out towards the stormwater drain (SWD) which connects Yelahanka lake to Jakkur lake. Officials said requests had been placed before the government seeking to increase the width of the drain from eight feet to 33 feet to prevent repeated flooding.

Pavani Residency in Yelahanka New Town also got inundated, with vehicles in the basement getting submerged in the floodwaters on Monday. Fire brigade officials later pumped out water from the area.

Meanwhile, Manyata Tech Park in North Bengaluru’s Nagawara, one of the largest tech parks in the city, too witnessed waterlogging. Employees who arrived for work had to return home as they were unable to reach their office buildings since the roads inside were flooded.