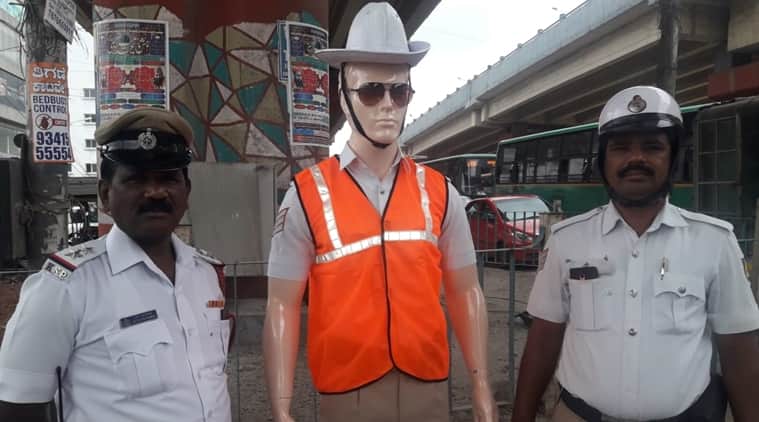 The mannequins have been outfitted in police uniforms, reflector jackets, boots, hats, and masks. (Express Photo)

In a unique initiative to curb traffic violations, the Bengaluru Traffic police have installed life-size mannequins at main junctions all over the city.

Cops believe the around 200 life-size mannequins will deter people from breaking traffic rules, such as jumping signal, speeding and not wearing helmets.

READ | Explained: How Bengaluru hopes to decongest traffic with its bus priority lanes

Speaking to Indianexpress.com, Bengaluru City additional commissioner (traffic) BR Ravikanthe Gowda said, “I have observed that people follow rules once they spot traffic police personnel. For example, when a driver sees a traffic policeman near the signals, they put on seat belts. This behaviour of road users has made us install the mannequins in the city.” 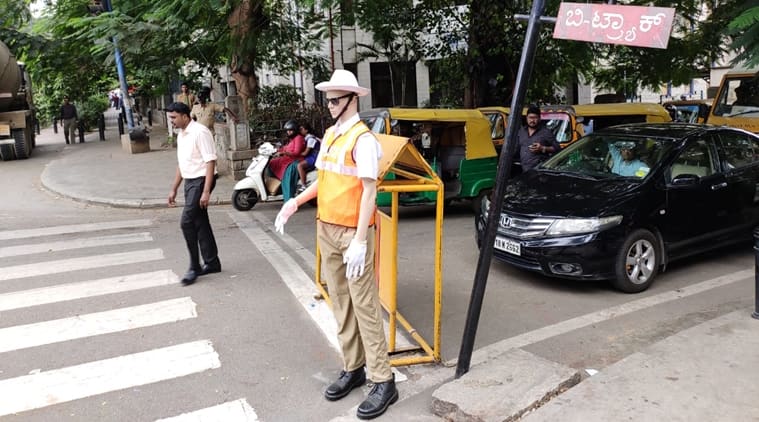 “The mannequins will be regularly shifted to other roads and also replaced with real policemen frequently,” he added. Earlier, 30 mannequins had been installed on a trial basis. On Wednesday, the number was hiked to 200.

The mannequins have been outfitted with police uniforms, reflector jackets, boots, hats, and masks to make them resemble real-life policeman.

Meanwhile, urban transportation expert and former advisor to the Karnataka government on matters of traffic and infrastructure, M N Srihari, said mannequins would be of no use in curbing traffic violations. “Police should undertake awareness programs and hold regular drives against those violating the law. They should recruit more police personnel to manage the growing traffic in Bengaluru. Mannequins won’t help. The right vehicle-to-police ratio should be maintained. The city requires a minimum of 7,000 personnel, but there are only 5,000 traffic policemen in the city,” he said.

According to data from the Karnataka Transport Department, as of July 2019, over 82.53 lakh vehicles have been registered in Bengaluru, of which 57.3 lakh and 15.72 lakh are two-wheelers and four-wheelers, respectively.